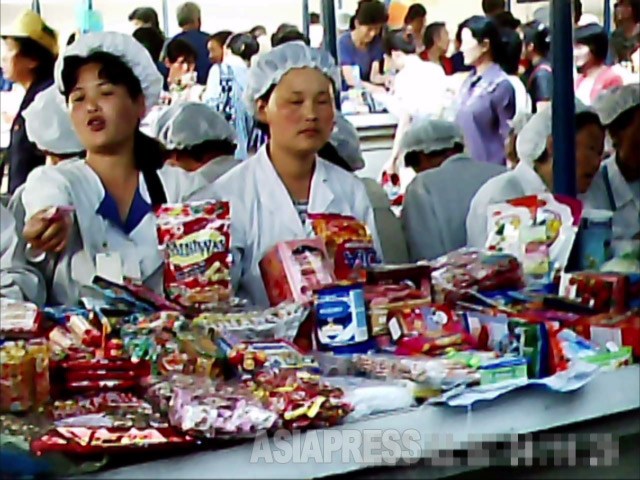 Food stalls at Moran market in central Pyongyang. The women are not the shop clerks but they are the owners of the stalls, which are 80 cm in width. 2011 July. Taken by Koo Gwang-ho (ASIAPRESS)

6 Expansion of the market economy shaking the “class system”

Hwang Jang-yop, the former secretary of the Workers' Party of Korea, defected to South Korea with a script of Kim Jong-il’s speech given in December 1996 at Kim Il-sung University. In the speech, he mentioned the “farmer’s market” and that, “the growth of the ‘farmer’s market’ and merchants may fuel an egoism in people’s minds, causing an instability of the class system.”  Eventually, the Party may lose its foundational support from the general public.  It is a similar situation to what happened in Czechoslovakia and Poland.  [Note: A South Korean magazine. “The monthly Korean affairs” 1997.04]

For two reasons, Kim Jong-il regarded the expansion of a farmer’s market, becoming very much a black market, as the birth of capitalism: a significant threat to the regime.  First, as for the much touted “socialism supremacy,” the incapability to provide people with clothes, food, shelter, education, and medical care casts doubt by the people on socialism in North Korea.  Second, the collapse of the “governance based on the food supply” may also fuel an anti-socialist sentiment among the masses.

Around 20 years has passed since Kim Jong-il made that speech.  The expansion of the market economy, initially born as a black market, has slowly but steadily evolved into a nationwide commerce system.  In spite of repeated interference and the many compromises of the government, the market economy has become prevalent without even being led by the regime or having any drastic legal challenges.
Related Article: ＜Inside N. Korea＞ Expansion of the market economy as the driving force behind social transformation–based on sources from inside North Korea. (PART1)

However, the North Korean government has not given up on socialism and nor the planned economy.  The Supreme People's Assembly held every April, which reports the result of the previous year’s national budget and plans, and discusses then approves the national budget for the next year.  However, since 2002, the amount of the annual industrial production, grain production, and the national budget have not been released: strangely, only the annual percentage of change as compared to the previous year has been published.  Since the planned economy has been dysfunctional, the currency, the North Korean Won, can no longer show on an economic indicator. [*Note 4] Next page: The Kim Jong-un regime partly introduced the market economy...

Next Page
1 2 3
Facebook Twitter はてブ Pocket Feedly
RECOMMENDATIONS
The Dark Ages: Residents Complain as “Power-saving” Zones Expand Across the Countryside
“We don’t have electricity for even a second. Not a blink. It’s like l...
＜Inside N.Korea＞ Interview with Two N.Koreans: Shock and Horror on Assassination of Kim Jong-nam
2017/Feb/18 The news that Kim Jong-nam, a half brother of North Korea...
＜Interview with inside N.Korea＞ Ordinary N.Koreans have, “No Interest” and “No Expectations” about the Worker`s Party Congress -Only Hope Is “Opening up N.Korea”
The 7th congress of the DPRK Worker’s Party finally ended on May 10. H...
＜Inside N. Korea＞ Growing discontent with Kim Jong-un regime in North Korea
2018/Aug/1 Recently it seems as if North Koreans’ opinion of Kim Jong...
＜Inside N.Korea＞ Tighter Control of Inter-provincial Movement: Investigating corruption in Hoeryong City’s People’s Security Station
On August 2, an ASIAPRESS reporting partner in North Hamkyung Provinc...
Elderly party members excluded from DPRK Party Conference… Increased surveillance of the population
A reporting partner of ASIA PRESS reported that the first recommendati...
＜Inside N. Korea＞ Why is Hunger Getting Worse in June? “Malnutrition has made it impossible to go to work, and some have died from eating wild plants”
The impoverishment of North Korean is getting worse. It has been 1 yea...
Exclusion of North Koreans from the Mount Kumgang Tourism Project
Although I have yet to make a visit, I am told that the sight of Mount...
＜Inside N. Korea＞ Stomach-turning Tradition: Citizens Called Upon to Collect Compost of their Own Making for Collective Farms
2019/Jan/21 ◆ Kicking off the year with a "compost collection battle"...
＜Inside N. Korea＞ Bribery Bust-Up: Police Chief Replaces All Traffic Cops to Ensure Monopoly Over Bribe Money
The North Korean government is mired in a severe shortage of foreign c...