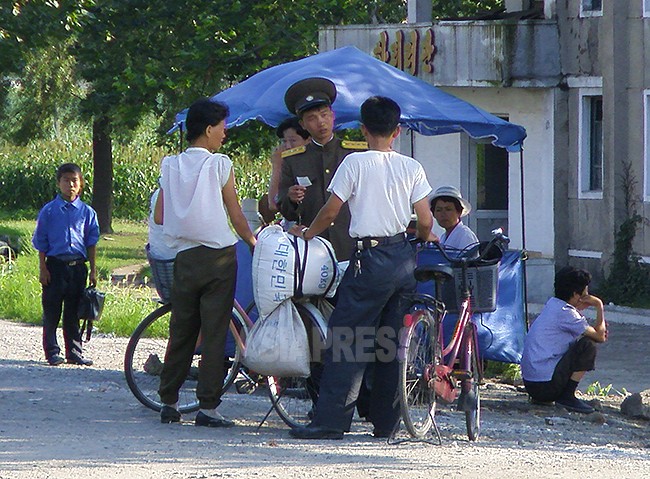 (Photo) Residents encounter a police crackdown on their way to a market while taking grain purchased in a farming village. Photographed by Zhang Zheng-ji on the outskirts of Pyongyang City in August 2008 (ASIAPRESS).

It has been more than a month since food prices in North Korean markets began to soar. Grain prices are swinging wildly across North Korea, and markets are still in turmoil. The authorities, fed up with the situation, began to take draconian measures by forcing vendors to sell their products at lower prices and confiscating supplies if vendors do not comply. It is said that vendors who have rebelled against the unreasonable price controls by refusing to sell their goods. Overall, the authorities' strong-handed measures seem to have had little effect on price stability (Kang Ji-won / ISHIMARU Jiro).

In mid-June, the food prices in various parts of North Korea soared dramatically. Compared to the end of May, the price of white rice temporarily reached 1.7 times the usual price and the price of corn by 2.4 times, causing chaos for ordinary residents.

Vulnerable groups who could not afford to buy food faced starvation and workers who could not even go to work due to malnutrition. In response, the authorities distributed 5-7 kilograms of corn to registered households in various areas at the end of June and mid-July. In addition, the local government advertised that it would start selling corn at a slightly lower price than the market price at official “Grain Marketing Centers".

Market prices have dropped slightly, but are still wildly volatile. The following is a survey of food prices conducted by ASIAPRESS in several cities in the northern region. (Unit: won, price per kilogram; foreign currency exchange rates also fluctuate wildly, with 1 U.S. dollar worth about 5,000-6,000 won)

In a desperate attempt to control prices, the Social Security Department began to enforce ceilings on market prices in the second half of July to ensure that rice is sold at the prevailing price of 4,000-4,500 won and corn at around 2,200 won.

According to a reporting partner who lives in the northern region,

"The police have informed the traders that they will be severely punished not only for selling at high prices, but also for operating outside the market and hoarding grain, saying that ‘the traders are flouting the state policy by being so greedy with their money-making.’”

So, what is the market situation like? A reporting partner in Ryanggang Province explained as follows:

“There is a shortage of grain now, and competition is fierce as Tungchu (the rich) are buying up all the grain they can. Even though the prices are rising, the authorities interfere and even confiscate the grain, saying that it should not be sold at a high price nor put into storage. Due to the strict price monitoring by the market controllers, most of the vendors have stopped going to the market and sell their products from their homes. However, the crackdown team has been going around the vendors' houses. They go after people just for having a bag of rice at home.”

The authorities are also paying close attention to the flow of food from rural areas to cities. Cooperative farms have a stockpile of "reserve rice," and the authorities are wary of this food bring resold at markets at high prices.

The authorities are trying hard to prevent the farm's "reserve rice" from being distributed to the cities. "The roads leading to the farming villages are checked and food is only allowed to be taken out of villages if it weighs less than 10 kilograms," said a reporting partner in North Hamkyung Province.

◆ Residents are skeptical about market stability

As mentioned above, authorities are forcing markets to lower prices, however, our reporting partners say that they think “it will be difficult to stabilize prices.”

Due to the lack of funds and shortage of farming materials such as fertilizer, the predominant expectation is that this year's harvest will not be good. The earliest corn harvest will be at the end of August in some areas. And, with rice harvesting in October, the shortage is not expected to be resolved in the foreseeable future unless a large amount of food aid arrives from China and other countries.

"There is food held by government agencies, but officials want to sell their supplies to the market to make money. A senior official I know said that ‘food prices would go up again.’ The officials seem to be looking for an opportunity to sell the food at a higher price. The police, however, are watching their movements and increasing their surveillance," said a reporting partner from Ryanggang province.