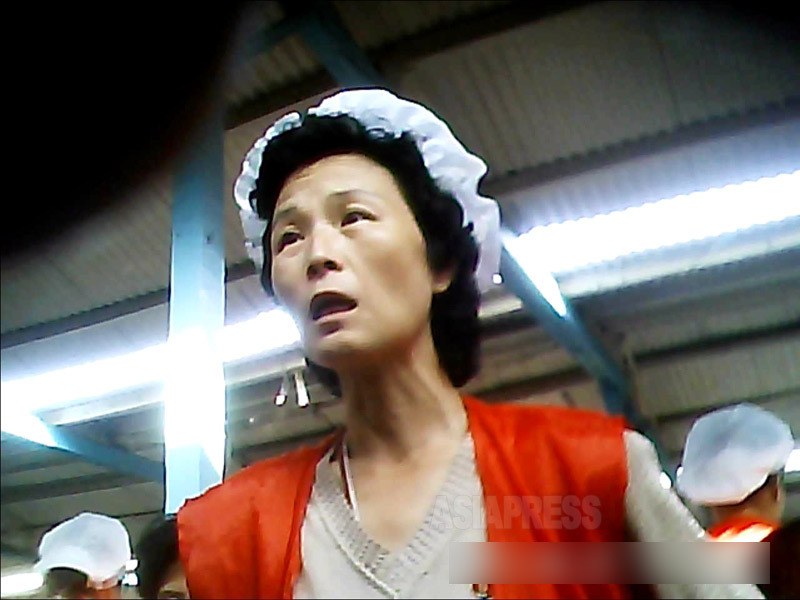 (Photo) A woman at a public market making calculations with a calculator. Photographed by "Mindeulle" at Hyesan Market in August 2013 (ASIAPRESS).

Turmoil is spreading in markets across North Korea.

The prices of staple foods such as white rice and corn, which had skyrocketed since the beginning of June, dropped on the 19th but rose sharply on the 22nd, reaching the highest prices of the year in many places. Several merchants have stopped trading with no change in sight, causing a growing sense of anxiety among residents (Kang Ji-won / ISHIMARU Jiro).

ASIAPRESS conducted market investigations in the northern cities of Hyesan in Ryanggang Province and Musan and Hoeryong in North Hamkyung Province from March 21 to 22.

Although there were slight price differences among the regions, the prices of white rice and corn soared. The average price in each area is as follows. Prices are in Korean won per kilogram.

“The price hike is serious. I'm afraid of what will happen next. The market managers, police officers, and price-fixing teams cracking down on high prices are too bewildered to intervene. Those who have the goods are not willing to sell them, and the market is barely functioning," said reporting partner living in Hyesan.

The prevailing exchange rate for 1 US dollar on June 22 was 5450 won. Calculated at the international rate, 1 RMB should be equivalent to about 840 won.

In the meantime, information is spreading that food aid is coming into the Nampo port from China. A reporting partner in Hoeryong City told us that the authorities have notified the residents as follows.

“At the beginning of July, we were informed that food would be sent from China, but that it would be distributed first to the 'food insecure households' on cooperative farms. On the farms, households that needed assistance submitted applications and began to get registered. On the farm where my acquaintance lives, 70 percent of the households have registered.”

The term "food insecure households" refers to households that have run out of food and cash.