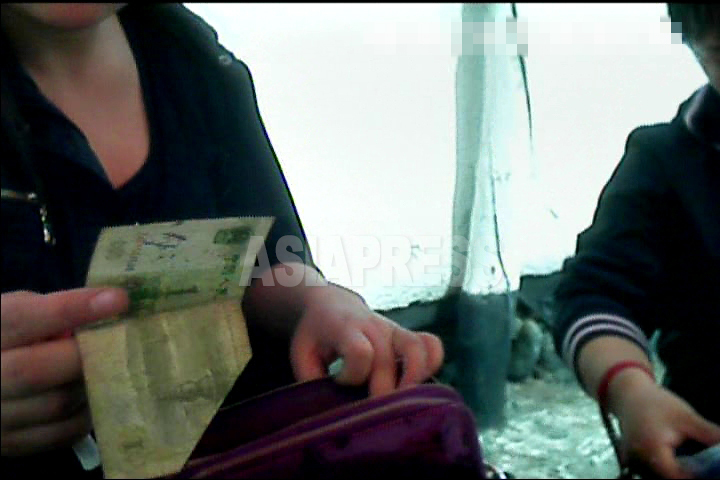 (Photo) A businesswoman tries to give change in 1 RMB bills. Now, due to a crackdown, yuan is no longer available in the market. Photographed by ASIAPRESS in Hyesan City, Ryanggang Province in October 2013.

The value of the North Korean won has suddenly skyrocketed, despite the country’s continued economic slump due to its extreme quarantine measures against the coronavirus. (Kang Ji-won / ISHIMARU Jiro)

The sudden rise in the North Korean won was detected on June 4 and continued on June 7. The prevailing exchange rate on May 29 and May 7 was as follows:

The exchange rate between the North Korean won and the RMB or U.S. dollar is determined independently by underground money changers called "tondeko" around the country, based on reference values unofficially announced by the Foreign Trade Bank of DPR Korea in Pyongyang every morning.

ASIAPRESS has been researching and publishing the market rates of various regions once a week. For this report, several reporting partners living in the northern part of the country conducted a survey and confirmed that the figures were almost the same. The above figures are from the city of Hyesan in Ryanggang Province, however, a separate report was received from Hoeryong in North Hamkyung Province on the night of the 7th, reporting that 1 RMB = 640 won and 1 US dollar = 5200 won. As such, the increase does not appear to be a temporary surge of the won in a specific region.

◆Are the authorities pushing for stronger foreign currency controls?

What is the cause of the sudden appreciation of the won? While the RMB is currently appreciating internationally, the North Korean economy is in a slump, and there are no objective conditions that would cause the won to rise in value. Also, why would the appreciation against the yuan be almost twice as large as that against the dollar?

“There were rumours that trade with China would resume in May, but there are now no prospects of that. Private smuggling has been completely blocked too. There is a strict crackdown on the use of foreign currency, and some traders do not want to accept the RMB. It is becoming increasingly challenging to use the RMB.”

This is what Mr. A, one of our reporting partners who lives in Ryanggang Province, told us. He suspects that the decline in demand for the RMB in North Korea is the reason for the appreciation of the won and the depreciation of the yuan.

"Rumors are spreading that those foreign currencies will be turned into scrap paper, and more and more people are rushing to sell their foreign currencies. On the other hand, the "dongchu" (newly wealthy) are taking advantage of the current appreciation of the won and are hoarding RMB. Although the people's distrust of their currency is deep-rooted, the sudden appreciation of the won is disturbing the market," said Mr. B.

Prices in won have risen only slightly in the past ten days, but the increase is remarkable in terms of yuan. A kilogram of white rice cost around 4 yuan last year, but now it costs 6.9 yuan. This is double the price in China.

The situation in Pyongyang and other regions where the U.S. dollar is more dominant than the RMB remains unknown.