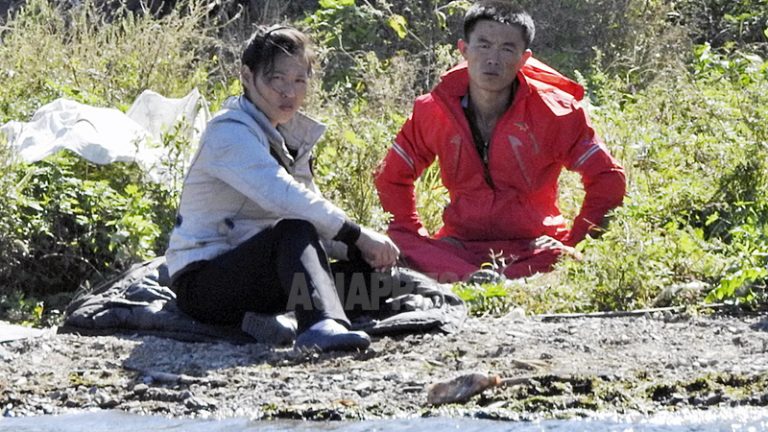 (Photo) A young man and woman sit and talk on the riverside of the Yalu River. Photos of Sakju County, North Pyongan Province, from the Chinese side in September 2019 (ISHIMARU Jiro).

◆"Electricity is supplied only for one to three hours a day”

The city of Hoeryong is located in North Hamgyong Province in the northeast of North Korea. Although there are no major industries, the city has been favored in terms of urban development as it is the birthplace of Kim Jong-suk, the mother of Kim Jong-il. It currently has an estimated population of 150,000.

Our reporting partner, a factory worker living in Hoeryong, told us of how bad the electricity situation has been since May. He is a member of the Workers' Party and lives in an apartment in the centre of the city.

Q: How is the current state of the electricity supply?

A: It's terrible. The "residents' line" only provides about one hour of power a day. We have a hard time even charging our cell phones.

Q: What are the reasons for the deterioration power supply?

A: There are several reasons. One reason is that now is the busy farming season, so priority is being given to planting rice and other agricultural work at cooperative farms. Since the authorities are ordering us to carry out the tasks of the Five-Year Economic Development Plan, the "industrial line" of factories and enterprises is being given priority, cutting the supply of the "residents' line”. Although the rural and industrial lines are supplied for eight hours a day, this is much shorter than in usual years.

In the first place, electricity production itself has fallen considerably. We have built many small and medium-sized hydroelectric power plants all over the country, but many rivers have dried up because of the cutting down of trees in the mountains (leading to no water retention capacity).

Also, due to the blockade of the Chinese border to prevent the influx of the coronavirus, mechanical parts are no longer coming in from China, and we cannot repair the broken generators. Stable electricity production has not been possible. At the moment, we are concentrating on agricultural work, but there is also a shortage of electricity to run the pumps. This is why we are cracking down intensively on illegal electricity use.

◆Electricity theft by officials will also be punished

Q: There has been a crackdown on "electricity thieves," right?

A: That's right. Cases in which officials use "industrial lines" to bring electricity to their houses without permission, or in which traders use their connections to get power distributed to their houses to make sweets, bread, and popsicles, are thoroughly investigated and severely punished. They have set up a crackdown team composed of officials from the provincial party, prosecutors, and the People's Committee (local government). The head of the people's group has even mobilized his son to look around for unregistered electrical appliances and electric heaters in use.

Q: Weren't electricity meters installed in every home, and weren't people charged according to the amount they used?

A: They forced us to install electricity meters, but they are still surveying the appliances in our house and making us pay for them accordingly. In my apartment, they even installed a machine that shuts off the power if the electricity bill is not paid.

What about Pyongyang, the capital, where electricity supply takes priority over local cities? On May 31, the U.S.-based Radio Free Asia (RFA) reported that it had received information from inside sources that "the entire city of Pyongyang has begun to receive a 24-hour electricity supply.

ASIAPRESS asked our reporting partner to call an acquaintance living in Pyongyang to find out, and as of June 4, he was told that “The daily electricity supply is about five hours.” It is expected that the supply of electricity will vary from district to district.

In addition, in Hyesan City in Ryanggang Province, as of June 4, the electricity supply was limited to about three hours a day.

＜Related Article＞
Facebook Twitter はてブ Pocket Feedly
RECOMMENDATIONS
＜Inside N. Korea＞ Plummeting Won Causes Market Panic: Authorities Crack Down on Black Market Money Changers Amid Fears of Inflation
As the real exchange rate of the Chinese RMB and the USD continues to...
Exemplary-contributors Praised At The Public Notice-board
North Korea Food Situation - 3 2011/September/19 Report by Kim Dong-ch...
Cows are the Property of the State - Severe Punishment For Unauthorized Slaughtering
The Daily Life of North Koreans2014/February/23 Written by PAEK Chang-...
Love Thy Neighbor: N.Korean Public Confused as Regime Prohibits Criticism of China
◆ Is China not the “1,000 year-old enemy”? Since mid-January, the Nort...
＜Inside N. Korea＞ Authorities Crackdown on Rising Prostitution Among Underage Girls, Including 'Aid Relationships'
In North Korea, the prostitution of underage and high-class junior hig...
＜Inside N. Korea＞ Residents Face Starvation as Border City is Blocked Off to Contain Potential COVID-19 Outbreak
An outbreak of coronavirus is suspected in Hyesan, the central city of...
＜Inside N.Korea＞ North Begins Propaganda: Talk With South Is Kim Jong-un’s Victory
2018/Mar/15 It is revealed that the North began the propaganda toward ...
ASIAPRESS ARCHIVE SERVICE-Conditions of Use
ASIAPRESS IMAGE(video-footage/photo) LICENSING Download the applicatio...
＜Inside N. Korea＞ Regime Strikes Gold: Authorities Lock Horns with Locals in Sudden Gold Rush
The discovery of large amounts of gold dust in a northern river is sai...
With time running out for the aging families of Japanese abductees, the Abe administration must lay out a roadmap for settlement talks with North Korea (ISHIMARU Jiro)
January 12 marked the 59th birthday of Keiko Arimoto (有本恵子), a Japanes...