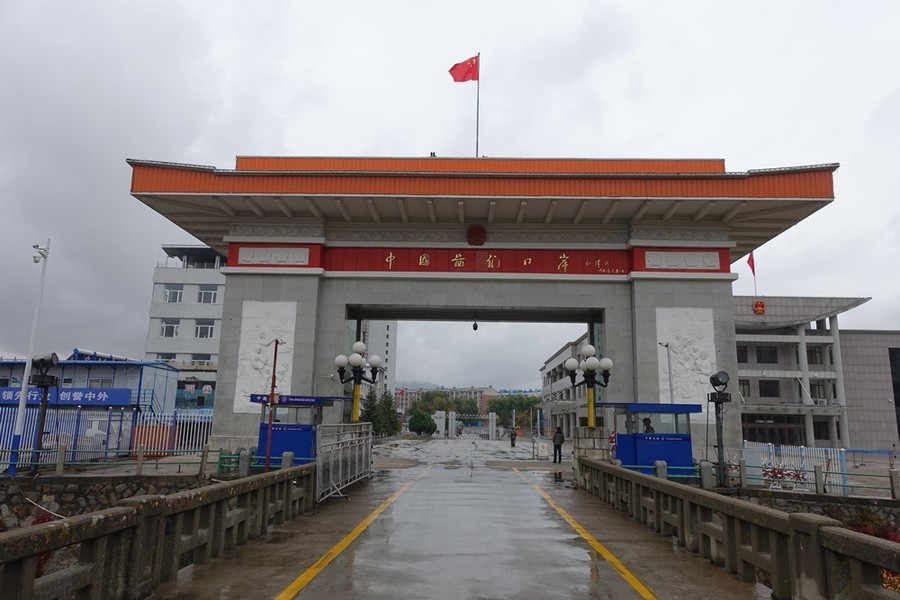 A Chinese customs facility in Tumen, Jilin Province. North Korea appears in the background. Photographed in October 2017 by ISHIMARU Jiro.

North Korean exports to China amounted to only $610,000 this March, according to a report released by China’s customs authorities on April 23. This marks a 96.2% decrease from last year, while imports similarly fell by 90.8%, totalling only $18.03 million. The report detailed a 91.3% decrease to total exports and imports between the countries, with a value of just $18.64 million.

The Kim Jong-un regime sealed off the Chinese border in late January after the outbreak of coronavirus in Wuhan, China, cutting off trade almost entirely. With people and goods blocked at the border, there was a devastating effect on trade, as detailed in statistics recently released by the Chinese customs authorities.

It is important to note that, as it is possible that the $18.03 million worth of goods imported from China includes medical and quarantine-related aid, trade of other goods may have been stopped altogether.

Back in late 2017, North Korea was the target of strong economic sanctions by the UN Security Council. The sanctions had a devastating long-term effect as North Korea’s trade volume for last year, in comparison to 2017, was almost halved. On top of that, the impact of the COVID-19 pandemic has caused massive economic disruption.

Now there are an increasing number of North Korean residents who are struggling to make ends meet. Moreover, those in vulnerable groups of the population are beginning to suffer from hunger.

A reporting partner explained, “There are more and more people who are eating only 2 meals a day and there are some households with no food at all,” adding, “People are saying that death will come quicker from starvation than from the coronavirus.”

North Korea is now motioning for a resumption of trade, as the coronavirus situation has become relatively stable in both China and North Korea. According to a trade broker in Jilin Province, however, China is not expected to allow trade to resume until the end of May due to concerns that coronavirus could spread to the Chinese border regions from North Korea. (ISHIMARU Jiro)

Facebook Twitter はてブ Pocket Feedly
RECOMMENDATIONS
＜Inside N. Korea＞ Investigating the Cause of the Suspiciously Rapid Appreciation of the N. Korean Won
It was at the end of October that the abnormality was detected. The ex...
＜Inside N. Korea＞ Power Struggle: Fearing Collapse of Power Grid, Regime Orders Crackdown on Electricity Bribing
Reports are coming in from all regions of North Korea that the power s...
Interview with a Trader from Pyongyang (PART2)
(Interviewed by ISHIMARU Jiro, editor in chief - Rimjin-gang) 2015/Mar...
The lockdown in Hyesan suddenly lifted after only two days, due to strong opposition
Hyesan’s lockdown was suddenly lifted on the evening of March 4, just ...
[Video Report] Residents diligently picking up coal ~Earning five times more than monthly wage in just a day~
This video was filmed at a railway in North Pyongan Province in March ...
＜Instant Interview＞ Even North Korea’s Elite Soldiers Carry Parasites
2017/Nov/20 On November 13, a North Korean soldier posted at the JSA (...
“Secondary school textbooks issued under the Kim Jong-un regime” DVD Book Now!
ASISPRESS collected 65 secondary school textbooks published under the ...
Massive "Censorship Unit" Dispatched to Border Town - Presumably To Prevent Escapes Related to the Jang Song-taek Purge
2014/January/09 Written by PAEK Chang-ryong, a defector reporter. Tens...
＜Inside N. Korea＞ “You Must Shoot Anyone Stealing the Harvest": Live Ammunition Distributed at Cooperative Farms For 24/7 Guard
Since mid-September, North Korean authorities have ordered all cooper...
〈Photo Report 3〉Widening Gaps - The Privileged Enjoy a Luxurious Life And the Homeless Suffer Harsh Days
2011/December/15 Report by Gu Gwang-ho (June, 2011) Our country's TV n...