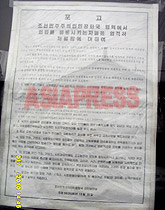 In December 2009, an official decree was announced "On Severely Punishing Those who Use Foreign Currency."

This shows how the credibility of the won has plummeted,leading to the people taking action to seek foreign currency.

Kim Dong-cheol took this photograph of an official decree posted on the street in January 2010. <Rimjin-gang / Page156>

On Severely Punishing Th ose Who Use Foreign Currency Within Our Republic Uncompromisingly protecting the orderly circulation of a nation's sole currency is the sacred legal duty of all citizens, and is important collateral for protecting the nation's autonomous rights and the economic foundations of society.

Yet recently, certain organs, enterprises, social cooperatives and citizens have grossly violated the orderly circulation of the nation's currency, causing extensive harm to the thinking and spiritual lives of the people, destroying holesome social order and disrupting the orderly management of the socialist economy.

These are serious criminal acts that violate the interests of the people and the state, inhibiting the building of a strong and prosperous nation. It is extremely dangerous, poisonous behavior that erodes Our Style Socialist System.

The Public Security Ministry [National Police Agency], in line with a mandate from our republic's government, hereby issues the following decree to rigorously correct the orderly circulation of our nation's currency and uncompromisingly eradicate illegal activities and crimes using foreign currency within our republic.

1. All organs, enterprises, social cooperatives and civilians are prohibited from activities leading to the circulation foreign currency within our republic.

a. Foreign-currency-only stores, restaurants, service enterprises, and all other business units shall discontinue all services that were previously provided in exchange for foreign currency, and provide services only in our currency. Moreover, airports, international hotels and other service units dedicated to foreigners shall provide their services only if foreigners exchange their currency for our currency at money exchange centers.

b. State organizations that have previously accepted various commissions, fares, and fees in foreign currency shall now accept them only in our currency.

c. All trading organizations (including joint ventures) shall supply the goods they have imported following the national plan. Plots to profit fostering illegal foreign currency use by handing over imported goods to organs, enterprises, and social cooperatives not in the plan are all prohibited.

d. All citizens shall strictly adhere to the procedure of always exchanging foreign currency into our currency at exchange centers before use. All black market transactions, usury, loan sharking, fraud, brokering, smuggling, bribery, plundering and any other criminal activities are all prohibited.

e. All foreign currency necessary for organs, enterprises, and social cooperatives shall be secured following the national plan.

2. With the exception of those work units approved by the state, all domestic export indices of other units shall be abolished. Illegal non-cash foreign currency transactions between domestic organs, enterprises, and social cooperatives are all prohibited.

3. The relevant bank organizations shall set straight the exchange system and order between our currency and foreign currencies, and conduct monetary exchange operations in a responsible manner.

4. No organs, enterprises, social cooperatives, or citizens may behave in a manner that impedes or interferes with the operations of the regulatory control agencies or their employees in charge of cracking down on illegal foreign currency use. The legal authority shall be notified immediately upon witness of illegal foreign currency transactions in our republic.

5. Any organ, enterprise, or social cooperative that violates the contents of this decree shall be forced to discontinue its economic activities and operations, or be dissolved, and the money and goods involved in the transaction shall be confiscated. Those who buy or sell goods using foreign currency, those who plunder, or illegally use foreign currency for black market transactions, loan sharking, brokering or bribery, or those who organize, implicitly condone, or encourage such activities, shall have the money and goods in the transaction confiscated, and face severe legal punishment, which depending on the degree of the offense could extend to the death penalty.

6. This decree shall go into effect January 1, 2010, for all organs, enterprises, social cooperatives (including military and special organizations), citizens, and foreigners in our republic.

Facebook Twitter はてブ Pocket Feedly
RECOMMENDATIONS
＜Interview with N.Koreans＞ "Is it any better in Kim Jong-un Era? Not at all! Preferential treatment is given to the Party officials by sacrificing the needs of the residents in the regions outside of Pyongyang!"
2015/December/13 Edit by KANG Ji-won, defector reporter, Rimjin-gang &...
＜Inside N.Korea＞ Celebrating Mood in Pyongyang Is Propaganda, High Alert Is Reality
2017/Apr/14 Many foreign media, including Japanese newspapers and bro...
People Struggle To Collect Firewood for Winter
The Daily Life of North Koreans2014/February/19 Written by PAEK Chang-...
[Video Report] Back alley of Pyongyang: Never let foreigners go. Residents of central Pyongyang live on businesses in the market.
◎ASIAPRESS rimjingang YOUTUBE playlistThere are public markets in each...
＜Inside N. Korea＞ Distribution Distrust: Residents Wary of a Return to Rations after Huge Harvest Provides Potatoes to Whole Province
Amid news of poor rice and corn harvests across various parts of North...
Kim Il-sung Portraits replaced by "Kim Il-sung - Kim Jong-il" Duo
2014/October/28 Report by PAEK Chang-ryong, a defector reporterApotheo...