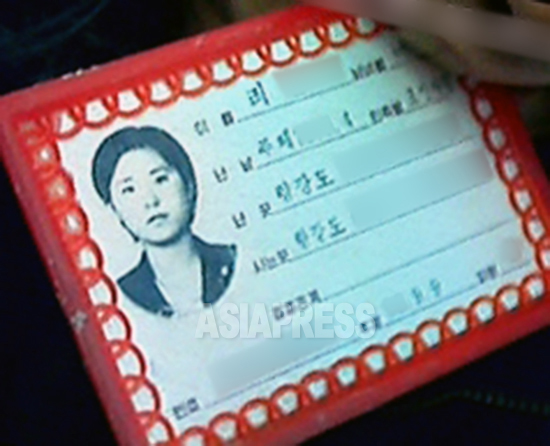 Identity cards will be renewed for the first time in 8 years. This photo, taken in October, 2013, has been partially edited for personal safety. (ASIAPRESS)

◆ Identity cards to be renewed ahead of possible March election

After a year of delays due to financial difficulties, it appears that North Korea has finally resumed issuing new identity cards. Originally scheduled for distribution in the spring of 2018, the identity cards are now being issued for the first time in over 8 years and for the first time since Kim Jong-un came to power. The identity cards, used to update and track the information of residents, will be integral to maintaining the regime’s control over the people, say multiple partners reporting on the development from North Korea.

The process for the renewal of identity cards began in 2017, with the authorities announcing that new cards would be issued in May 2018. By the end of 2017, photographs had been taken of all residents aged 17 and older. However, the cards were never produced, as financial difficulties brought repeated delays.

A reporting partner living in the northern region of the country, met with a officer from the local police station’s “resident registration division” and explained the situation as follows:

“The police officer said, ‘After continuous delays due to financial difficulties, new identity cards will finally start being issued. Distribution should be completed by February 16 (Kim Jong-il's birthday).’ In some regions, it seems that new cards were being issued since last December.”

Next page:10,000 North Korean defectors have entered South Korea over the past 8 years...

1 2
Facebook Twitter はてブ Pocket Feedly
RECOMMENDATIONS
Rising discontent as control reinforced to prepare the 7th Workers Party Conference in May… Forced labor to the runaways from their work places and coerced savings to banks…
Declaring nationwide 70 days battle (*1) to prepare the Workers’ Party...
[Video Report] Kotchebi Girls, Sexually Abused and Exploited
The mid 90s’ were a chaotic period for North Korea. During this time ...
＜Inside N. Korea＞ Kim Jong-un Gives Direct Order to Crackdown on Cash Brokers: “S. Korean agents are painting Chinese banknotes with coronavirus and sending them here”
North Korean authorities have launched a sweeping crackdown on remitt...
＜Photo Report on N.Korea＞ Ex-Soldier Confesses “War Is Impossible for Hungry People’s Army!”
2017/Apr/24 The duty for a newly conscripted North Korean soldier is ...
＜Inside N. Korea＞ "Our expectations were foolish"...Trade Officials Disappointed by Breakdown at Hanoi Summit
◆It would have been better to threaten the U.S. than to have the summi...
＜Inside Report＞ Bad Reputation for Kim Jong-un’s wife, Ri Sol-ju, is spreading with an image of “Chick” who loves extravagance and splendor.
When asked about Kim Jong-un’s evaluation to North Koreans, their repl...
＜Photo Report＞ Female Soldiers are in Miserable Conditions: Mothers are worried about their daughters getting sexually harassed and becoming malnourished.
2017/Feb/6 In late 2011 a female North Korean defector in China regre...
N.Korea IT Report - PART2: Diffusion of South Korean Content Through Mobile phones
2015/July/20 Written by LEE Jin-su, Editor; Rimjin-gang and ISHIMARU J...
＜Inside N. Korea＞ Bank Card and ATM Appear in Local Cities. Split Responses; “Convenient” and “Still Can’t Trust the Government.”
2017/Jan/6 Following the issuance of bank cards for companies and ind...
＜Inside N. Korea＞ Residents Face Starvation as Border City is Blocked Off to Contain Potential COVID-19 Outbreak
An outbreak of coronavirus is suspected in Hyesan, the central city of...