Putting on a Show to Enhance Authority with the Military Writing the Script Has the Side Effect of Leaving a Bad Impression on the Global Community
2013/April/20
Written by ISHIMARU Jiro,Editor in Chief, Rimjin-gang

When the people evaluate a statesman, which criteria is most important? That would naturally be, is life easier or harder? Good causes or slogans or principles will not fill the stomach. If life is better, the people will believe the government and leaders are doing a good job, and if they are forced to go hungry, the reputation of the government will suffer. In any country, that's the way the people are. 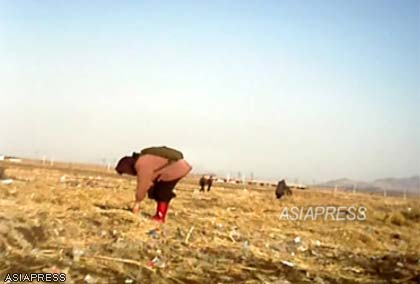 (Reference photo) Elderly woman gleaning a post-harvest field. This is a familiar sight in North Korea in autumn. This photograph was taken in November 2012 in the suburbs of Sinuiju in the North Pyongan Province by an ASIAPRESS reporting partner. (C)ASIAPRESS

Most of the residents of North Korea have been finding ways to get hold of food by themselves through trading or working in the black-market, since food rations from the state have been absent since the 1990's. But since the Kim Jong-un administration came into power, there have been restrictions on travel, mandatory participation required at political events, and other forms of measures to strengthen control to stabilize the political situation. This has led to a nationwide slump in business, in other words, "there has been an economic downturn" leading to less cash income for the people.

Social infrastructures such as electricity, water and railways, which should be the responsibility of the state, are suffering widespread paralysis. Regarding electricity in particular, since last autumn, our reporting partners in various parts of North Korea have been voicing their dissatisfaction, saying, "quite often, there are days when there isn't even a single second of electricity the whole day."

A reporting partner who lives in the Taedong-gang District of the capital city Pyongyang had this to say.
" Electricity used to be available till the end of last year. But since March, it is available only three to four hours a day. And tap water is only available once a day."

Turning to the railways, a trip that normally takes two days now often takes two weeks. In general, the conclusion is that "Since the era of Kim Jong-un, things have become even worse."

Perhaps because of this kind of dissatisfaction or frustration, residents are still treating Kim Jong-un as "a young whipper-snapper who's not half the man he thinks he is." This trend still exists today, one year after his assuming power. Our reporting partners continue to use expressions like "the twenty-year-old urchin" (he is actually thirty), or "Saekki (brat)". Even when we meet people who have crossed the border from North Korea legally, on business or to meet relatives, what they have to say is very similar. "He still doesn't know anything yet" is putting it mildly.

The North Korean authorities, probably concerned about their reputation, have been making desperate efforts to get Kim Jong-un accepted as an authority figure, to create the image that he is "a fully-fledged and capable man". For example, they have been repeatedly releasing video and photographs of Kim Jong-un at various events accompanied by his wife Lee Seol-ju. This is probably with the intent of emphasizing that he is "a full-grown adult with a family".

What stands out in the way the state media represent Kim Jong-un is, their efforts to make him an authority figure have a military bias. For example, looking at Kim Jong-un's title and the way he is addressed, first comes "Beloved", then in most cases, this is followed by "Supreme Commander", "Marshall". The South Korean or Japanese media often use "First Secretary (of the Korean Workers' Party)", or "First Chairman of the National Defense Commission", but these titles are hardly ever used by the state media. In the case of the late Kim Jong-il, after starting with "Dear" or "Beloved", this was often followed by the military title of "General", or the title "Leader". But the state media rarely call Kim Jong-un "Leader".

There are two reasons for this military bias in his titles. One is, he has no past achievements in other areas. He has never traveled abroad, and the economy continues to be stagnant. He cannot exert his authority by touching on the stage of international politics, or on improving the quality of daily life. Domestically, the only past achievement of the Kim Jong-un administration is the successful launch of the "rocket" in December last year.

The other reason is, by repeatedly emphasizing he is the supreme leader of the military, they probably wish to quash the rumours among the people or within the military that he is "a young brat" = inexperienced. But these efforts to give him authority from a military aspect are overly excessive, and conversely, they are harming Kim Jong-un's dignity as a state leader and making people doubt his common sense.

Ever since bulldozing through with the nuclear tests in February, North Korea has been using heated expressions like "nuclear attack" and "sea of fire" to pressure South Korea more than ever before. North Korea's unsophisticated "verbal attacks" are nothing new, but what is extremely concerning is, the state media are using direct quotes from what Kim Jong-un said as these "verbal attacks".

On March 12th and 14th, Supreme Commander Kim Jong-un visited the front lines in the South Hwanghae Province and the Korean Central News Agency reported these battle orders as their headlines.
"... all enemies should be thrown into the fire once I issue an order...""... assigned ... the duty to blow up the headquarters of the enemy through merciless firepower strikes."

Even in the days of Kim Jong-il, the "verbal attacks" were dire and dreadful. But as far as I know, they were issued under the name of organizations or agencies. Even if the "verbal attacks" were staged to enhance authority, having Kim Jong-un talk about destroying South Korea is certain to lead to strong skepticism among those in South Korea, Japan or the U.S. in favour of reconciliation with North Korea over whether the "belligerent Kim Jong-un is an appropriate counterpart for dialogue". Kim Jong-un's position could become extremely bad.

Now, who is the one who has been writing the series of scripts since around the nuclear test? That is what concerns me at present. It is difficult to imagine that the young, inexperienced Kim Jong-un is coming up with this story.

He is merely playing one of the roles in the script. The South Korean authorities seem to believe that the mastermind is Choi Ryong-hae, Director of the Korean People's Army General Political Bureau.