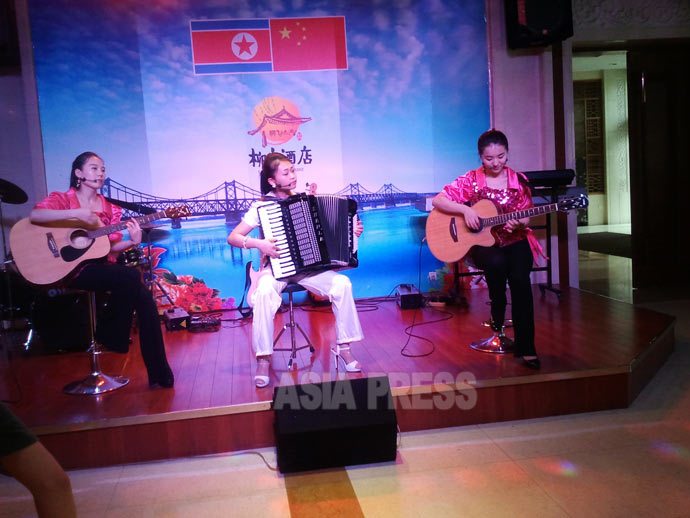 North Korean staff singing during a show. They live together in a nearby apartment. Taken by ASIA PRESS in Yanji City, Jilin Province, China on July 2013.

On April 8, the South Korean Ministry of Unification announced that 13 North Koreans, a manager and 12 employees of a North Korean restaurant, had defected from the DPRK and requested asylum in South Korea. There have been number of group defections of by sea or overland from North Korea. Mostly those groups were composed of their families. It is rare to see mass defections when the group is comprised of unrelated individuals.

The Ministry of Unification quoted the defectors as saying, “We aspired to go to South Korea as we knew about its economic achievements through TV or Internet,” and “As the economic sanctions intensified, we thought that there would be no hope in North Korea.”

However, it is difficult to believe that their ostensible statement explains the real reason for their claiming asylum in the south.

◆ Surveillance is slack in China, but most potential defectors hesitate to defect because of family remaining in North Korea.

The writer often witnessed young female employees going to beauty parlors or public baths in Yanbian city. If they intended to escape, they could have done it. It is not unimaginably difficult to escape from the work place for these employees.

Living and working together as a group may discourage employees of North Korean overseas business ventures from contacting South Koreans or foreign reporters, connecting to the internet, or watching South Korean TV,

The chain that prevents them from defecting is an ‘unseen fear.’ This fear derives from the question of what would happen to their family after their defection.

There must have been anguish and hesitation in a short period when the 13 defectors of ‘Ryukyung Restaurant’ decided to escape. They knew that their family in North Korea would face a severe punishment under the North Korean legal system.

But they chose to defect. The reason must be that they felt a kind of fear that they would be executed.

Next Page： ◆ Repercussions yet to come
1 2
Facebook Twitter はてブ Pocket Feedly
RECOMMENDATIONS
＜Inside N. Korea＞Outbreak of “10-Day Flu” in North Korea: Authorities Restrict Attendance at Work Due to Lack of Medical Supplies
A malignant strain of influenza is spreading in North Korea. As the se...
[Video Report] A rare glimpse of ‘No. 10 Checkpoints’ set up by the State Security Department
The reality in North Korea is that citizens are not allowed to move fr...
＜Inside N. Korea＞Domestic Currency Appreciates by 22% as RMB and U.S. Dollar Mysteriously Plunge Again
The actual exchange rate of the RMB and the U.S. dollar recently plum...
Rimjin-gang - Periodic Survey - Price List (2011/June 8 - 14)
2011/June/20 Currency Unit : North Korean Won=KPW Musan County North ...
Feuding Over Fuel: Regime’s Lifeline Under Threat as China Arrests Gasoline Smugglers
◆ Gas prices have stabilized- but why? North Korea has been subjected ...
★★★ASIAPRESS ARCHIVE SERVICE-Licensing Fee
LICENSING FEE The client shall agree to all articles of the Conditions...