2015/December/13
Edit by KANG Ji-won, defector reporter, Rimjin-gang
<This article first appeared in the Korean and Japanese edition of Rimjin-gang on October 2015>

The North Korean media are day by day propagating the achievements of Kim Il-sung/Kim Jong-il in order to highlight Kim Jong-un's greatness and induce the loyalty from the people before the coming of the 70th anniversary of the foundation of the Korean Workers' Party this October 10.

However, how do the North Korean people evaluate the three year-nine months' period of inauguration of the Kim Jong-un's regime?

This is the interview is made by defector reporter Kang Ji-won with a North Korean laborer in his thirties living in North Hamkyung Province.

Kang: Is there anything improved or anything new since the inauguration of Kim Jong-un's regime?

Laborer: Nothing changed. Frankly speaking, many people had high expectation when a new regime started. Some people thought that they would be better off since there would be no more factionalists after the execution of Jang Song-thaek.
However, no matter how it worked in Pyongyang, there is no feel of the effect here. It seems they made Jang the scapegoat for their mismanagement of policies as Kim Jong-il executed Park Nam-gi for the failed currency reform.

(*Some North Koreans seem to believe that the deteriorated economy was due to the harmful behavior of the faction led by Jang Song-thaek as the North Korean authority propagate.)

(*It is known that Park Nam-gi, the Director of the Planning & Finance Department, was executed after he failed the currency reform in 2009.) 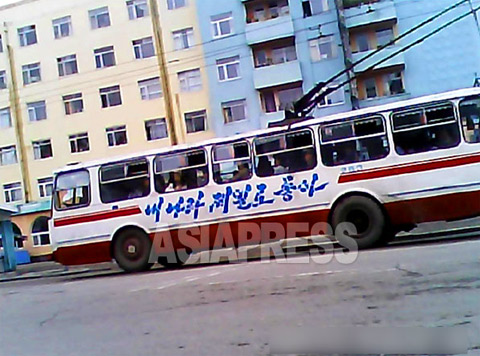 Stopped trackless trolley. Slogan, "I love my mother country the most!" on the trolley. (Pyongsong city, South Pyongan Province: September 2013. Taken by our Team "Mindeulle") ASIAPRESS

Kang: Pyongyang has been propagating that they have done a lot things for the people such as housing construction, ski resort construction, and building an airport in Pyongyang. What do you think about that?
.
Laborer: What is the benefit from the construction? We, the regional folks, have not got any benefits from whatever they have built in Pyongyang.
Let me tell you one example. One person says that it is impossible to approach even the entrance door of the newly built water park without U$. Exceptionally they provide entrance tickets for free on holidays, otherwise they have to pay in U$.

It is irrelevant to the people who live hand to mouth. We have not even been to the airport which is needed for the people going abroad. We do not dare to dream to get on an air plane before dying.

While they are saying they would construct residential housings, where we do not know, and who would live there in Pyongyang, there is a concern that the tax burden would be made through coercive collecting scrap metals and coppers.

(*It would be impossible for the ordinary North Koreans to board a plane for personal business in such a country that restricts the domestic trip of its people.) 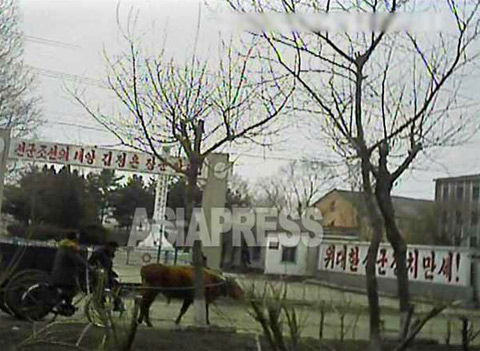 The slogans "Sun of the military first Korea, Long live the General Kim Jong-un!," "Long live the great military first policy!" are hung at the entrance of a government office. (South Pyongan Province: March 2013. Taken by our Team "Mindeulle") ASIAPRESS

Kang: Eventually, have the people lost hope toward the new regime?

Laborer: Yes. The people do not have any expectation from the government as they have been deceived over and over.
There is nobody who believes the propaganda saying that the economy is getting better, because they think that they, by their own judgment, have to do business or illegal activities in order not to be starved.

Any new economic measure would not be any help for the people in the region. They think that a war should start regardless of whoever wins, so that it would be better off for them.
In short, it seems it is getting better for the government officials and the Pyongyang residents. Who would like this regime showing the rich is getting richer and the poor is getting poorer just like it was before?

Therefore, people do not have any other thoughts but making more money even through illegal businesses. It would be misjudgment to think that the future is better than the past. Rather the future must be much severer.

Facebook Twitter はてブ Pocket Feedly
RECOMMENDATIONS
＜Inside N. Korea＞ Border Burning: Police investigate potential arson in Hyesan after fire claims 24 houses
Police are investigating the cause of a blaze which destroyed or damag...
＜Inside N. Korea＞ “Death to Defectors”: Kim Yo-jung’s Campaign Incites Hatred Against Defectors and Stokes Fear among their Families Still in the North
The Kim Jong-un regime has been holding mass rallies across the countr...
＜Inside N. Korea＞Market Price Since Imposition of New Economic Sanction
2017/Jan/17 On 30 November last year, the United Nation Security Coun...
＜Inside N. Korea＞ Penniless Protectors: Underfunded Orphanages Struggle to House N. Korea’s Homeless Children
It was not long ago when homeless children, known as ‘Kotjebi’, were a...
＜Urgent ＞ What is happening inside N.Korea with COVID-19？ The government heavily crackdown on hoarding and restrict movement to other areas
North Korean authorities officially acknowledged that the Omicron var...
＜Inside N. Korea＞ Checkpoint Barley: Farmers Frisked for Grain as Authorities Secure Shrinking Food Supply for Government and Army First
Since mid-September, “grain checks” have been carried out across the N...