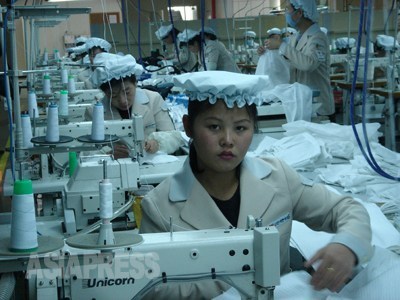 (Photo) A North Korean worker in a sewing factory within the Kaesong Industrial Complex. February 2007, ASIAPRESS

In February 2016, it was revealed that factories within the Kaesong Industrial Complex were secretly maintaining operations. Despite the withdrawal of South Korean companies from the complex, following the decision of the Park Geun-hye administration, North Korean authorities had ordered for continued production of high-quality clothing at the complex. The clothing is said to be sold to wealthy North Koreans without labels or tags- in order to obscure its 'Kaesong’ origin. (Kang Ji-won / ISHIMARU Jiro)

In late November, a reporting partner living in South Pyongan Province reported the following: “‘Kaesong products’ are expensive compared to those made in China, but they are known for their high quality and are popular among North Korean officials and the wealthy. For example, a down jacket costs 650 Chinese yuan (95 USD). A similar, Chinese-made jacket goes for 350 yuan (about 51 USD).”

According to the reporting partner, only the companies and institutions that issue the statements for official 'Kaesong products' are permitted to circulate them. The products are first transported from Kaesong to Pyongsong City, South Pyongan Province, from where they are then distributed nationwide. Before shipping from Pyongsong City, all labels and tags that could indicate the clothing’s origin are cut off with scissors. Because the clothes can fetch a high price, a large number of counterfeiters have taken to selling fake products along with the authentic Kaesong-made products.

The reporting partner described how the authorities maintain the secrecy of the operations in Kaesong, explaining, "At the checkpoints on the roads leading out of Pyongsong City, ‘label inspections’ are conducted. If even a single item has a label left on, the whole lot of goods will be confiscated. There was a case in mid-November when one distributor had tags discovered on their products at a checkpoint along the road to Chongjin City and had to give a bribe of 2,000 yuan (291 USD) to avoid having all of the products confiscated."

Now, ‘Made in Kaesong' has essentially become a highly-valued brand across the country. But why is the state making such an effort to intentionally remove the labels?

The reporting partner explained, "The authorities are making sure that the outside world does not find out that the factories in Kaesong are secretly in operation. It would surely become a problem if South Korea found any evidence."

Next page: The reporting partner had never seen…