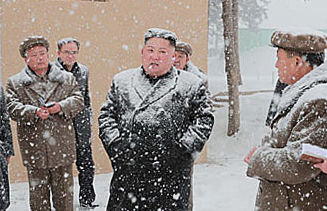 As winter sets in, Kim Jong-un inspects the construction site at Samjiyeon. From the Rodong Sinmun.

On October 30, the Rodong Sinmun reported that Kim Jong-un inspected construction at the Samjiyeon Special Tourist Zone in northern Yanggang Province. Marking his third visit this year, Kim Jong-un regards the Samjiyeon construction project as a top priority for the state. Workers and students around the country have been mobilized for the project under a construction unit called the '2.16 Storm Troop Division'. The unit is charged with carrying out construction in 6 month rotations until the tourist zone is  completed. Local officials in charge of the unit, however, were reprimanded by Kim Jong-un after a series of delays.

At the end of October, ahead of Kim Jong-un’s latest visit to the construction site, the Workers’ Party and local administrative officials were under considerable pressure. In order to make progress before the arrival of harsh winter conditions, officials pushed local residents to contribute their labor and private capital towards construction. Despite this effort, work on housing at the tourist zone was not completed before the October 10 deadline, the anniversary of the party’s foundation. In mid-November, a reporting partner in Yanggang Province reported the following:

"Due to a lack of funds and construction materials, the completion target could not be met and the deadline was pushed back to the end of October. Then, the authorities brought in skilled workers to complete the construction of the exterior walls and interior finishing, paying them $1 per 10 square meters. The panicked executives, fearing punishment for more delays, hired these workers with their own money."

A similar frenzy is taking place in Hyesan City, Yanggang Province, where it is said that housing reconstruction in Wiyon District was not completed by the October 10 deadline. At this site, skilled workers were similarly recruited to finish the work, receiving a daily payment of 30 Chinese Yuan (4.3 USD).

According to our reporting partner, "There are many skilled workers who come from other regions, attracted by the 'high wages'. Officials tell us that the 'storm troops', who were originally mobilized for the project, are ‘donating’ money themselves to make up for the construction delay. But this is simply not true. The officials are afraid of being punished by Kim Jong-un and are paying the new workers out of their own pockets or with money collected from other organizations."

It is not just extra labor that is being diverted to Samiyeon. After Kim Jong-un visited the construction site at the end of October, electricity meant for the homes of residents in Yanggang Province was diverted to the Samjiyeon construction site. According to a number of reporting partners, as of November 16, the “power-saving” strategy is affecting most residential areas. The electricity is reportedly being used to power heating coils for drying cement.
Next page: Medical students dispatched to the special tourist zone...

1 2
Facebook Twitter はてブ Pocket Feedly
RECOMMENDATIONS
Price is rising up due to a cornering sign of sanctions (ISHIMARU JIRO)
UN Security Council unanimously made a resolution to impose sanctions ...
[Special Report] ＜Inside N. Korea＞ Shaken by Sanctions- Regime Takes a Direct Hit as Pyongyang’s Privileged Feel the Pressure
On February 27, Kim Jong-un and Donald Trump met in Hanoi for a secon...
＜Inside N. Korea＞ Cremations for Cash: Residents Relocate Tombs as Regime Rakes in Profits
According to reporting partners in North Hamkyung and Yanggang Provinc...
＜Photo Report＞ People are exploited in mobilized labor (2) Recorded women’s complaining voices; “This is all free labor,” “Everything is taken by the high ranks”
The mobilized labor is performed by the unit of work place and school....
＜Interview with a North Korean Woman (1) ＞ Why the COVID Situation is Causing a Surge in “Black-Market Abortions”
The plight of North Korean residents is worsening. In order to block t...
Official Decree - Redenomination - Currency Exchange
Redenomination : Official DecreeIn December 2009, an official decree w...
University Students Are Bored With Formal Uniforms - Women Wearing Shorter Skirts As A Sign of "Rebellion"
The Daily Life of North Koreans2014/April/16 Written by PAEK Chang-ryo...
＜Inside N. Korea＞ Kitchen Nightmare: Cash-Strapped Regime Competes Against Citizens in the Restaurant Business
◆Kim Jong-un’s funds take a hard hit Who are the most powerful people ...
＜N. Korea Pro Report (Part 4)＞ How is N. Korea’s Economy Faring in the Face of the Coronavirus Pandemic and Continued Sanctions? A Look at the Exploitation of Women Working Overseas
In a 2019 report, the US State Department claimed that North Korea dis...
＜Inside N. Korea＞ COVID Confession: Local Authorities Notify Public of Rising Coronavirus Cases in 3 Regions, Including Pyongsong and Sariwon
North Korean authorities are reportedly informing residents for the fi...