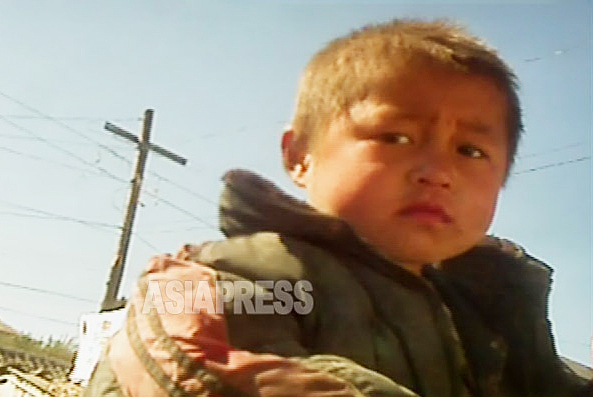 A boy seen roaming around markets and residential areas. He appears to be about 10 years old and his hair is discolored. "I don't have any parents," he told the photographer. Taken in the suburbs of Hyesan City, Yanggang Province in November, 2012 (ASIAPRESS)

It was not long ago when homeless children, known as ‘Kotjebi’, were a common site in the markets and train stations of North Korean cities. Lately, however, this sad sight has become increasingly rare, as improvements in the management of orphanages has had a beneficial effect. (Kang Ji-won)

The term ‘kotjebi’ was first coined in the mid-1990s, when famine gripped the country, to describe the displaced children roaming the streets. The situation improved as the country recovered during the Kim Jong-un era, mostly thanks to the expansion of the market economy and reduction in food shortages, but homeless children were still an all-too common sight around marketplaces. Revealing to the world the unfortunate legacy of the famine, ASIAPRESS reporting partners in North Korea have taken photos of the ‘kotjebi’ at markets.

A reporting partner in Pyongyang explained to ASIAPRESS, "It is well known that Kim Jong-un was enraged by images of 'kotjebi' being televised in South Korea and other foreign countries and, therefore, issued orders to 'Accommodate all homeless children unconditionally’. That is why grand orphanages promoting ‘love for children’ were set up around the country."

The new orphanages, however, are not perfect. The quality of meals provided by the orphanages are poor and many children have ran away from the care facilities due to mistreatment. These children, once caught by authorities, are delivered back to the orphanages, only to run away again.

According to a reporting partner from Yanggang Province, who visited a newly-improved secondary education institute in-person, the government’s improvements in the care of orphans began to take effect in the latter half of 2018.

The reporting partner explained the improved conditions for the orphans, stating, "The orphanages receive full support from the government, unlike other institutions and enterprises that are not even provided with proper rations. The children are able to live there like they would in their own homes and the daily meals include white rice, with pork provided once a week. Even snacks and fruits are handed out each day."

According to the reporting partner, about 60 children have been admitted to the secondary education institute in Hyesan City, Yanggang Province, where they receive the same education as children in regular kindergartens and elementary schools. However, the separate institutions face concerning budget issues, with local organizations making up for a lack of funding from the central government.  The reporting partner said, "The Education Department of the Yanggang Province Workers’ Party is responsible for the provision of the children’s meals but local governments, local police, prosecutors’ offices, and trade organizations are required to provide other necessary funds."

Despite the difficult budget issues, the new institutions have had a strong, positive impact. The reporting partner explained that, "As the treatment of children in orphanages has improved, there are not many children running away these days. Usually, two or three new children are admitted each month. Many were abandoned by their parents and had become ‘kotjebi’. However, the improved institutions now allow for children whose parents have passed away to also be admitted. Though it remains difficult for children to be admitted to the facilities if they have any living grandparents or other relatives, regardless of their individual circumstances." 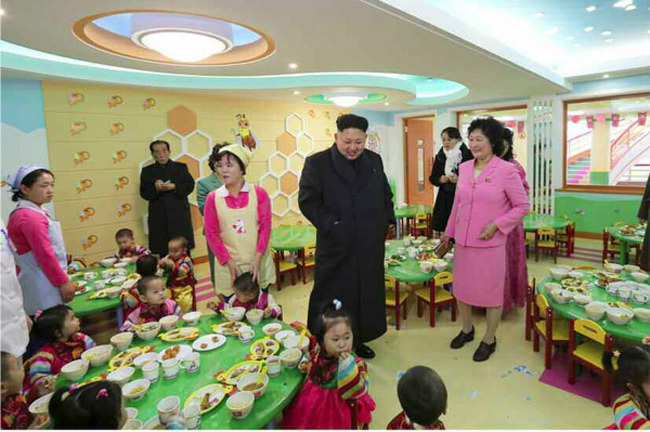 Kim Jong-un visits a large, newly-built orphanage in Pyongyang. Guided by an official, he walked around the facilities without taking his shoes off. Photograph taken from the front page of the Rodong Sinmun, dated January 2, 2015.