It has been reported through our North Korean reporting partner that the North Korean state is intending to review the role of Public Security officers (=police officers) and to improve their operational mandate.
Our reporting partner from the northern city of Hyesan, in Ryanggang Province, told us via phone conversations made at the end of August that a high ranking official belonging to the Ministry of People's Security (=police agency), was dispatched from Pyongyang, and attended the meeting held at the Hyesan police station on 22th August. At the meeting, he gave instructions calling for the improvement of the conduct of police officers.

Our reporting partner explained the details of the instructions:
"At the meeting, the official gave the following instructions. A new department will be established at the police stations of each province, city and county. The department is to be known as the Transportation Source Mobilization Department and will function to earn foreign currency, particular though trade with China. Funds earned from this department will be appropriated and earmarked for police officers (Editor's note; this is an indication of the living conditions of officers).
The official said that economic burdens currently imposed on each officer, such as financial contributions and requisitions, will be reduced through this new plan. In addition, staff of the departments of investigation and inspection at the police stations will be increased sharply. Furthermore, patrol wagons will be positioned at each facility of preliminary hearing, investigation, and correctional institution." 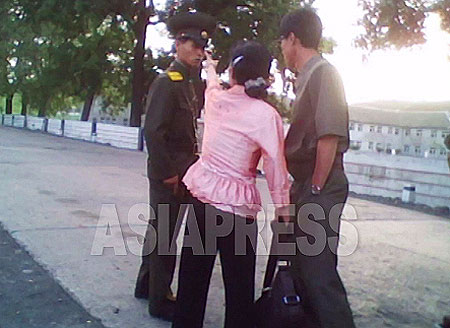 [Reference photo] Troubles and quarrels between police officers and citizens are daily affairs in North Korea. As long as the issue is not related to political crimes, many people are now not hesitating to voice their discontent to police officers. In this photo, a woman (center) protests loudly against the police officer (left) for his crackdown on people in the street. (June. 2010. North Pyongan Province. A captured image from the video footage taken by Kim Dong-cheol)

The Ministry of People's Security belongs to National Defense Commission; its main task is security maintenance, criminal investigation and law enforcement. It also engages in the surveillance of the public, background checks and crackdowns, and punishment against acts of national treason and anti-revolution.

Within the government structure, the investigation department and the preliminary hearing facility is primarily in charge of the investigation of criminal cases, while the inspection department is tasked to monitor and inspect the workers and operation of factories and enterprises (companies), and supervise whether these facilities are preserving the socialist principles and state orders.

However, in reality, the Ministry of People's Security is heavily tainted by patronage and corruption, which have been obstacles to the effective execution of its tasks as many officers accept bribes to overlook crimes. The reasons for this widespread corruption are related to the malfunctioning of the ration system, crippled under the economic hardships facing the state. Even the police officers, who seem to enjoy various privileges, cannot receive the regulated amount of food and materials. It is a sad fact that officers survive by receiving bribes for closing their eyes to the illegal activities of enterprises and the People's Unit (the lowest administrative neighborhood unit).
Our reporting partner describes the details of the changes facing police officers.

"At the meeting, it was announced that police officers will be excluded from the tasks of residential supervising which were categorized as residence register administration, and social compulsory mobilization labor activities. It has been explained at the meeting that it is expected this will allow police officers to conduct their original tasks more effeiciently."

This new move is only confirmed to be in place in Ryanggang Province thus far, and the ASIAPRESS North Korea Reporting Team is trying to find out further details in other regions.

Another reporting partner, a resident of Hoeryong city, North Hamkyung Province, told us via a phone conversation made on 27th August, that there are no significant changes yet observed in his region's police.
"In our region, no pr ominent changes for the police are observed so far, except for some new motorcycles were deployed for use by the police station chief and directors of the counter-espionage section belonging to the State Security Department."

New policies for the revision and improvement of police officers' roles are thought to represent a shift in their tasks to a greater focus on surveillance of the people. It is presumed that for this reason, the authorities are intending to impose measures for the reform of the police structures and officers activities, which known to be riddled by corruption.

People's views on Kim Jong-un's administration remains unfavorable as the young leader is yet to prove himself since succeeding his father, particularly in terms of economic policies.

This is also a contributing factor for the recent police reforms. The state is concerned with rising social unrest and the potential for this to grow into something larger.