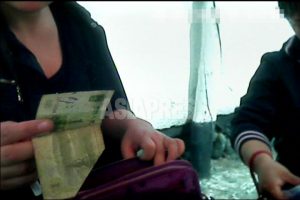 (Reference Photo) A female vendor transacts in Chinese Yuan openly. She is holding small changes of one Yuan in her hand. Taken by Mindulle in October 2013. (ASIAPRESS)

A reporting partner in northern part of North Korea reported that the crackdown on the use of Chinese currency at markets has been reinforced. Surveillance cameras are installed at the markets and, sometimes, the Chinese money are confiscated if used. (Kang Ji-won/ISHIMARU Jiro)

On telephone conversation of November 7, a reporting partner in Yanggang Province said “Crackdown on use of Chinese money is so severe. They used to ignore it before, just implying not to use them anymore. But they forfeit the money if they happen to see it.”

The North Korean authority has regulated the use of foreign currency at the market, but it has been tolerated to some extent. Merchants have used the Chinese money openly if they could evade the eyes of the market controllers. Giving changes in the Chinese money used to be common. As the value of North Korean Won has decreased constantly, so its low credibility has made people to use safe currency, namely foreign money. Meanwhile, the devaluation of the North Korean Won has stopped during the last two years.

The partner explained the toughness of the crackdown, saying “Disciplinary Units forfeit all the money from either the seller or the buyer if they happened to see the Chinese money by pretending to be a buyer in plain clothes. It is the same as people give away Chinese money to the Disciplinary Unit if they go to the market with Chinese currency.” 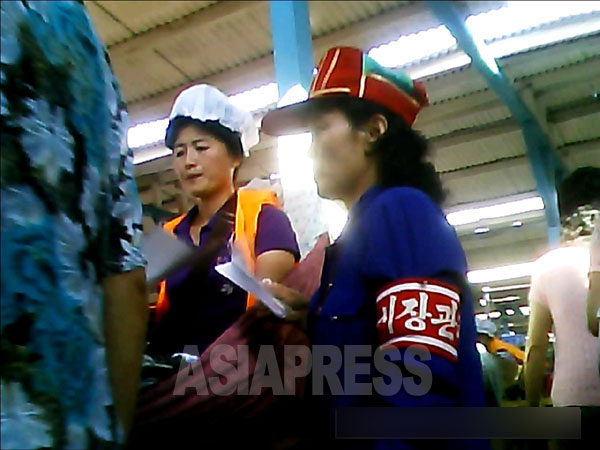 “Crackdown on use of foreign currency has got tougher since the end of August. Installation of surveillance cameras and confiscation are recent happenings,” confirmed another reporting partner in Yanggang Province

Why does the authority start the crackdown on the use of the Chinese currency? It might be a preparation for the economic sanction on North Korea.

Or, the authority tries to absorb foreign currency from the public as they expect the sharp drop of foreign earnings due to the sanction. It was not confirmed whether the regulation on the use of foreign currency was reinforced in other regions as of November 9.

Facebook Twitter はてブ Pocket Feedly
RECOMMENDATIONS
＜Emergency Interview＞Lockdown Death Toll Climbs in Hyesan: “We are Dying Due to Lack of Medicine and Food”
On February 15, the lockdown of Hyesan in Ryanggang Province, located ...
＜Inside N.Korea＞ Period of Vigilance for Worker`s Party Congress Suddenly Extended
On the afternoon of May 9, an ASIAPRESS reporting partner in northern ...
UN sanctions deal direct blow to state institutions and the wealthy
■ Direct blow to the privileged class Most trading companies are under...
＜Inside N. Korea＞ Theft of car parts is rampant in North Korea. Thieves immobilize vehicles by stealing tires, mirrors to sell on the black market...Few car parts make it over the border due to the pandemic
Throughout North Korea, the stealing of vehicle parts, including the m...
N.Korea IT Report - PART1: Kids Master Emoticons and Movies with Mobile phones
2015/July/19 Written by LEE Jin-su, Editor; Rimjin-gang The number of ...
The Weakest Won: Markets Run Entirely in Chinese RMB as Shoppers Abandon their Sanctions-Hit Currency
On August 6, the exchange value of the North Korean won took a massive...