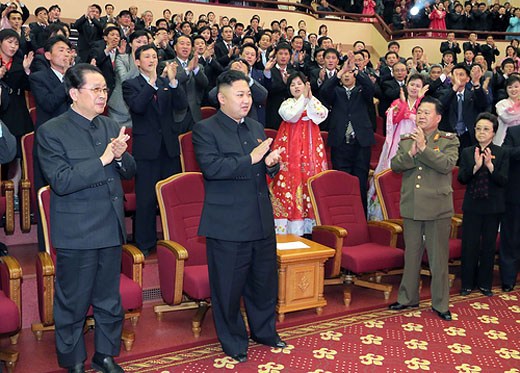 The photo compellingly illustrates that Jang Song-thaek and Kim Jong-un are equal. It seems that everyone in the theatre, including Kim Kyung-hee (Jang’s wife) and Choe Ryong-hae (one of top power men) is giving a big hand to Kim and Jang. (Quoted from the article of Rodong Shinmun reporting band concert for the celebration of Kim Il-sung’s birthday on April 15, 2013)

It is required to show courteous manner to the ruler with the heart of the highest respect, which is common sense behavior, regardless of rank.
At the conference all attendants must stand still when required to stand and they must look straight when asked to be seated.

But Jang has such an attitude as to ignore Kim Jong-un. I felt that Jang would be severelyattacked by his impiousness when I saw that video on the internet. Some of the North Korean people must also have been shocked while watching this on TV.

North Korean media were censored several times before releasing the images. If those images may damage the idolization of the top leader, then they must be perfectly edited. It is the characteristics of the North Korean media. In this context, it is easily perceived that Jang Song-thaek or his aide were wielded strong influence on the official media since Jang was standing out in the pictures. 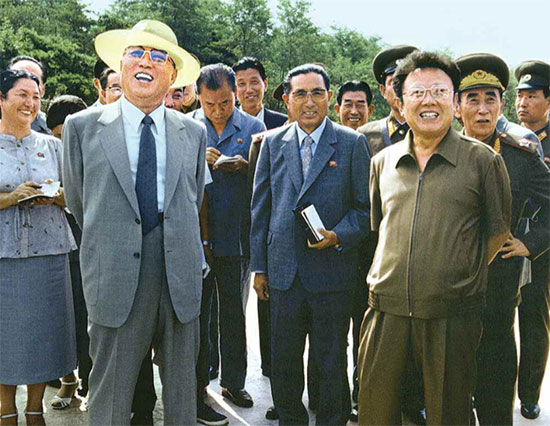 A defector from North Korea told me after seeing pictures like these. “How dare Jang Song-thaek take such a bold pose beside Kim Jong-un? Did he get such a power now? Won’t it be impossible to see Jang’s portrait on the wall?”
*Portrait: It is an obligation to hang the portrait of the ruler on walls in public facilities, public places and every household in North Korea.

Kang Ji-won, a defector reporter from North Korea, at the editing bureau of Rimjin-gang, also said that, “Jang’s position in the left side of the photo was that of Kim Il-sung. I was confident that North Korea was meeting Jang Song-thaek’s era.”

Next Page： (part1)
1 2
Facebook Twitter はてブ Pocket Feedly
RECOMMENDATIONS
Stimulant Drugs Take Root in the Daily Lives of the N.Korean People (PART2)
2013/October/07 Written by LEE Jin-su<< PREVIOUS (PART 1) Drugs ...
N. Korea Notifies Chinese Border Authorities that it Will Shoot "Hostile" Citizens and Smugglers "Without Warning"
◆ Chinese authorities bring North Korea’s warning to the attention of ...
“We Don’t Want to Meet”: Fearing Coronavirus Infection, China Rebuffs N. Korean Advances at the Border and Delays Resumption of Trade to Late-May
◆ No fertilizers imported for the farming season The China-North Korea...
activities/distributions
THE OUTLINE OF ASIAPRESS INTERNATIONAL Title: ASIAPRESS International ...
＜N. Korea Interview＞ "So the sanctions will continue?" North Koreans Face Disappointment as US Summit Breaks Down
◆“But we had been expecting the sanctions to be lifted…” On February 2...
＜Inside N. Korea＞ Agricultural Materials in Short Supply as Farmers Predict Disastrous Harvest
With the sowing and planting season just around the corner, farming co...