"We don't have even one single second of electricity a day!"
It is not something new to hear that North Korea has been always suffering from chronic electric power shortages. However, since last November, the power condition has been getting steadily worse nation wide. The people's discontent has been growing in various regions in the country.

"Not only foods, but now even the electricity has bome a ration distributed on special national holidays. This is how people think in our country. Except for just few hours in a New Years Day, electricity was supplied fully on only one day on the National Liberation Day, 15th August in this year.That's all." 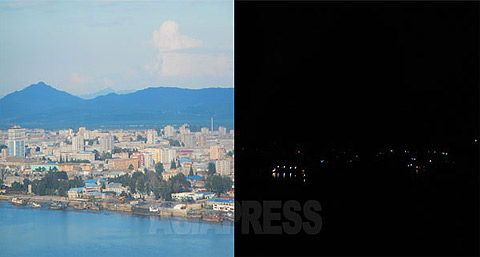 A picture of the Sinuiju city, North Korea's northern border town facing China. The left is the day-time and the right is the scene of the night. The picture was taken from the same position in China. Sinuiju has a prioritized power supply status, but lights could be seen sparsely in the night. (August/2015. Taken by ISHIMARU Jiro) ASIAPRESS

A phone conversation on 26th August with another reporting partner in Musan described the seriousness of the power supply condition in the area.

"We have almost no electricity supply these days. Even when we have small hours of supply, the voltage is too low. Each family tries to increase the voltage by their own poor transformer. So the voltage is unstable, and not only for TV, but it is even difficult to put on a light."

The power condition in the large cities is seemed to be almost same. Rimjin-gang's s editor, ISHIMARU Jiro has visited China in the middle of August, and made interview with a North Korean who was occasionally travelling to China from Chongjin, North Hamkyung Province, a country's third largest city. This man told as follows;

"In the most of the district in Chogingjin city, there is no electricity supply. Other surrounding cities are also in same situation." 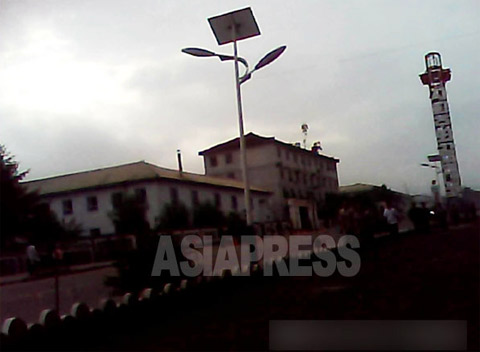 It is becoming common to see many street lights with the solar-power panesl in North Korea. (June/2013. Hyesan, Ryanggang Province) ASIAPRESS

A North Korean businessman from Pyongyang, when he was visiting China in this July, also told about the power supply condition to Rimjin-gang's Chinese staff. The ordinary houses receive electricity only a few hours a day since the beginning of this year. The supply of electricity is then shortly transferred to another city. There are number of people who get power illegally by paying bribes to power supervising offices. A previous reporting partner in Hoeryong told;

"There is a priority stable supply to some places and institutions such as at the statue of Kim Il-sung and Kim Jong-il, city's local offices of the Korean Workers Party, People's Committee(Regional Government), Judicial offices and some major factories. The people with living around these places with money "steal" electricity by bribing the power supervision officers or using" the backroom connections."

But since even these state institutions suffer from the power outage a few times a day, the statue lighting-ups and the KWP offices have the power generators by themselves. People who are in good financial shape buy the Chinese made solar-power panels and use them for their own houses.

This partner from Hoeryong explains the reasons of worsening situation of the power supply since last November.

"The area where I live, power is supplied from the Chongjin thermal station. But it is said that the coal for the station is allocated to the export material to China to gain the foreign currency. This leads to the decrease of the operation of the station."

For the investigation of the general condition of the power supply in North Korea, further detailed research should be made in wider area and sequence, however, judging from the reports and testimonies from our North Korean reporters and reporting partners, there is no doubt that the power condition in the country side has seriously deteriorated.