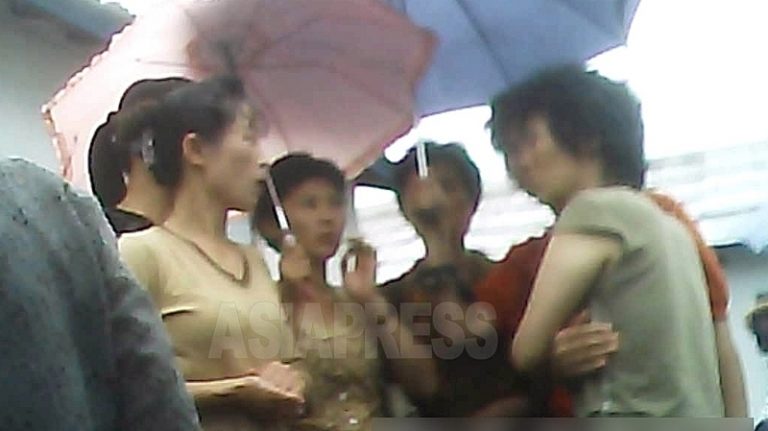 In early October, an unusual public event took place in Hyesan, North Korea. At nine o'clock in the morning, seven fortune tellers were brought before hundreds of mobilized local residents in a stadium.

A reporting partner, mobilized as a spectator at this rally, told us the following:

"The special event was called a "crowd exposure rally”. Of the fortune tellers on stage, there were one man and 6 women, with one in their 30s and the rest in their old age. After a police official denounced them for committing superstitious acts, they were handcuffed and dragged away. It was scary.”
＜Inside N. Korea＞ Hundreds mobilize in Hyesan to rally against fortune-telling and drug use

◆ Shamanism disappearing as fortune-telling is regarded as a crime

Religion has been suppressed in many socialist countries, including the Soviet Union, but, in the case of North Korea, suppression was altogether different. According to many defectors' testimony, in the late 1960s, shamanism was all but eradicated, with the religious practices of Buddhists and Christians also suppressed. To replace these ideologies, the regime prescribed the thoughts of Kim Il-sung as the monolithic ideology for the whole country.

In the late 1990s, however, "superstitious" activities were revived across the country as North Korean society looked for a way of dealing with the anxiety caused by the famine. During this time, a tremendous number of people were displaced across the country and in search of food. Fleeing the famine, more than one million North Koreans crossed the border into China.

The regime, meanwhile, abandoned its responsibility to protect the people. Every day, hungry people collapsed in the street, their bodies simply left there. Fraud, robbery, and murder went unpunished. The police, public institutions and the "People's Party" could not be relied upon. Nothing could be believed in or depended upon, causing anxiety and distrust to become societal norms. It was at this point, that the North Korean people began believing in fortune-telling once more.
[Video Report] Kotchebi Girls, Sexually Abused and Exploited
Next page: ◆ Will the Pope go to Pyongyang?