On the evening of February 12th, after Kim Jong-un forcibly went forward with his nuclear test, I managed to get through by telephone to our female reporting partner who lives in the Ryanggang Province in the northern part of North Korea. This was to ask about the mood within North Korea on the nuclear test that had taken place on that day before noon.

The world media reported this nuclear test as a "top story" news. But our North Korean reporter did not even know about the nuclear test taking place. On that day, the day after New Year's on the lunar calendar, she said she had been making the rounds in the market and trading till sunset."Oh, they did it, did they? The market was the same as usual, and no one was talking about the nuclear test. There were no emergency events, either. We have no electricity at all right now, so we cannot watch TV, and to start out with, nukes have nothing to do with the daily lives of the people." She spoke off-handedly in a slapdash manner, as if she could not be bothered about it. 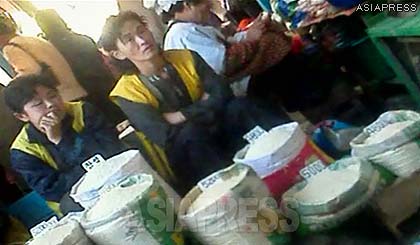 The strong "consensus" in North Korea seems to be "funds should be channeled into the people's livelihood rather than nuclear tests". Photo taken in November 2012 in Hyesan, Ryanggang Province (C)ASIAPRESS

Every time there is a nuclear test or a "rocket" launch, Korean Central Television or the Rodong Sinmun or other state-run media will immediately carry news on "the people bubbling with joy". This time too, since the evening of the event, there were broadcasts of "the citizens of Pyongyang cheering on hearing news of the successful nuclear test."

At the time of the "rocket" launch in December last year, there were also broadcasts of citizens dancing with joy. It has become the norm for media in South Korea and Japan to immediately use such images in their broadcasts. This has created a setup where the North Korean authorities stage a situation that "the people desire and rejoice about", and the media in Japan and South Korea assist in spreading the news.

On January 24, a statement was issued under the name of the National Defense Commission saying "a nuclear test would target the United States" and that this, too, was something "the people desire". In this way the North Korean authorities have been sending out the image that "the regime and the people are unified", and the media have been taking this and spreading it repeatedly, and I believe this has made it difficult for the global community to distinguish between the stance of the North Korean administration and that of the general public. In that case, how did the people of North Korea see the nuclear test or "rocket" launch?

The ASIAPRESS North Korea Reporting Team has heard from several residents since last year. Let me introduce what we heard. "We tell each other, one rocket launch will buy the whole population three years' worth of food. We all know that spending large amounts of money on the military is the reason for our daily lives becoming so much worse. But we cannot oppose what the higher-ups are doing. That would mean our whole family would be arrested." (male worker in his 30's)"I don't know if they truly mean it, or if they're just saying it, but some men proudly talk of how the United States and the "towns below" (which means South Korea) are shivering and quaking because of our nuclear weapons. But we have people dying of hunger, why nuclear weapons?

Most people have their hands full finding food to get them through the day, so their attitude is, they don't care at all about nuclear tests." (woman in her 40's, who appeared before)When Kim Jong-un appeared on the scene as the heir-to-be, there were hopes within North Korea that since he was young, he might begin a new form of politics, that North Korea might start heading towards reform and liberalization. But since his administration gained power last year, I feel his reputation has continued to decline. The biggest reason is, people daily lives have become worse.A middle-tier official of the Korean W orkers' Party that we interviewed in China in September last year had the following to say.

"Since this year, both the party and the military have been totally dedicated to making Kim Jong-un an idol, and to giving him authority. Tremendous amounts of money and efforts are being spent. That is because that young brat has nothing inside. With other officials that I can trust, we tell each other, 'things are going to get even worse than in his father's days'."Since the Kim Jong-un administration came into power, only central Pyongyang has become beautifully refurbished, and "rockets" and nuclear weapons have been developed without hesitation. Both are political expenditures, and neither are useful for production.

On the other hand, in the breadbasket Hwanghae Province, large numbers of people starved to death. This is because the military and Pyongyang were given priority leading to food being seized from farming villages.

Songun Politics, or the military-first politics of North Korea declare "self-defense against the United States" as its banner, and under the pretext of "this is what the people desire", have forged forward with nuclear development. But the people of North Korea do not want this, and it is clear this goes against the interests of the people.
-------

Facebook Twitter はてブ Pocket Feedly
RECOMMENDATIONS
＜Inside N. Korea＞ State Welfare: Citizens Forced to Enroll in State Insurance Plan to Prop up Government
◆Sanctions are working but the economic burden is being forced upon th...
[Video Report] Kotchebi Girls, Sexually Abused and Exploited
The mid 90s’ were a chaotic period for North Korea. During this time ...
North Korea Under Strict Coronavirus Watch Again, Military Soldiers Ordered to Stay on Base
North Korean authorities are increasing their measures against coronav...
Exclusion of North Koreans from the Mount Kumgang Tourism Project
Although I have yet to make a visit, I am told that the sight of Mount...
Is Mickey Mouse Becoming Popular in N.Korea?
The Daily Life of North Koreans 2014/February/28 Written by PAEK Chang...
＜Emergency Interview on North Korea＞ A woman living in Hyesan City under lockdown, speaks in a painful voice: “If this continues, I will starve to death.”
Hyesan City in northern Ryanggang Province of about 200,000 people has...
＜Inside N. Korea＞ New Year, Same Problems: Regime Stresses Mental Rearmament, not to Succumb to Economic Blockade
For the first time since Kim Jong-un took power, the regime has not br...
＜Video＞ Kim Jong-un's visit to China, different edits in North Korea and China
Kim Jong-un visited China from January 7 to 10 for a fourth summit mee...
N.Korean Authorities Distribute Jang Song-taek "Purge List" to Local Officials
2014/January/28 Written by ISHIMARU JiroNotification issued that Party...
The Power Supply Deteriorating In N.Korea - Prioritized Coal Export Possibly Decreased The Power Station Operating Rate
2015/November/11 Report by PAEK Chang-ryong, defector reporter, Rimjin...