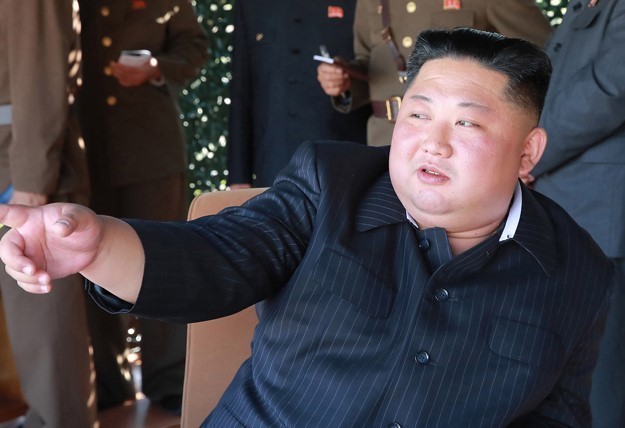 It is true that Kim Jong-un has gained much weight. In this photograph, Kim Jong-un inspects a missile drill. Originally published in May 2019 by the Rodong Sinmun

Information has been spreading around the world since April 21 of Kim Jong-un’s health problems. Rumors of the leader being in critical condition following a surgical operation were widely reported, causing a stir internationally. As of writing, Kim Jong-un’s true condition has not been confirmed. However, through the words of ASIAPRESS reporting partners, it is possible to know the security situation and atmosphere within the country. On April 21, ASIAPRESS conducted an interview with a reporting partner who lives in North Hamkyung Province and is a member of the Workers’ Party. (Kang Ji-won)

Q: It has been widely reported in South Korea, Japan, and the United States that Kim Jong-un is in critical condition following cardiovascular surgery. Has security been tightened in North Korea or have there been any sudden changes in the movement of officials?

A: What?? This is the first I’ve heard of him having surgery. Nobody knows this yet. From the provinces, it is hard to know what is going on in the heart of Pyongyang. People here may not even know who is the secretary in charge of North Hamkyung Province. There are no people speaking in hushed tones and I haven’t felt any change out on the streets. I don’t think security has been tightened either.

Q: For the first time, Kim Jong-un did not visit Kumsusan Palace of the Sun to mark Kim Il-sung’s birthday on April 15. Do people there not think of this as extremely unusual?

A: It’s definitely strange that he has participated every year but did not make the visit this year for the first time. I thought that he may not have been able to visit the palace because of an on-site inspection somewhere. Ordinary people, however, do not care in the first place whether Kim Jong-un visits to mark the holiday or not. They are all too desperate trying to make ends meet.

Q: Rumors of Kim Jong-un’s health problems have caused a stir worldwide. But North Korea doesn’t seem to be interested in the sympathy of leaders from other countries, right?

A: First of all, the authorities would never let us know (that Kim Jong-un underwent surgery.) These days, many people don’t watch the news on TV. Because they always say the same thing and nobody believes it. When Kim Jong-un rose to power, I expected there to be reforms, for our country to open up immediately, and for my life to improve, but there have been no changes and life has become increasingly difficult in recent years. Most people don’t have any hopes for Kim Jong-un, much less care about his well being.

※ Kumsusan Palace of the Sun (formerly Kumsusan Memorial Palace) is a mausoleum where the bodies of Kim Il-sung and Kim Jong-il are enshrined. Kim Jong-un has visited the site to pay tribute to his father and grandfather on the days marking the anniversary of their births.