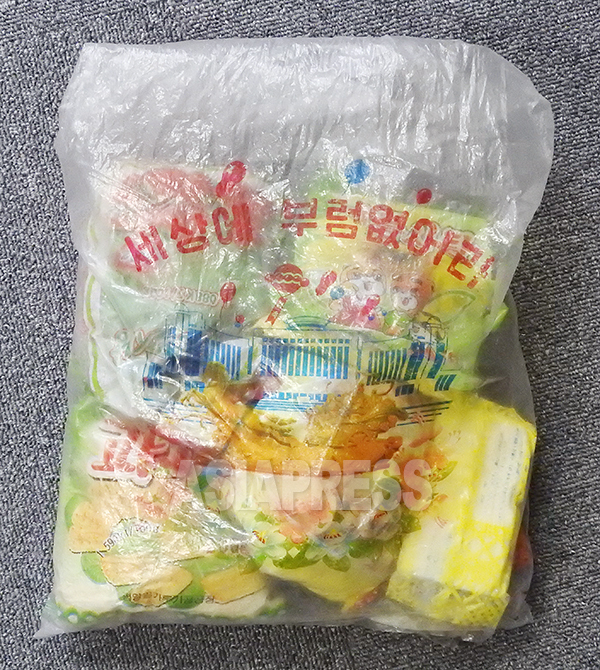 'We have nothing to envy in the world' written on a bag of domestic sweets distributed to children on Kim Jong-il's birthday in 2012. Many people complained about the lack of taste and sold them in the market. (ASIAPRESS)

October 10 was the 73rd anniversary of the foundation of the Workers’ Party of Korea, but it appears no special rations were handed out to residents, which had been normally provided on holidays. According to reporting partners in North Korea, special rations for Chuseok and the 70th anniversary of the foundation of the Republic were not provided either. What could be the reason for this? (Kang Ji-won)

As for North Korean holidays, Kim Il-sung's birthday (April 15th) and Kim Jong-il's birthday (February 16th) are the most important. Next are Lunar New Year, Chuseok, the Day of the Foundation of the Republic (September 9), and Party Foundation Day.

On holidays, "special holiday rations" had long been given to the people by the "Great Leader." Rice, liquor, cooking oil, school supplies, and confectionery gift boxes were among the goods provided. The purpose was to promote Kim Il-sung and Kim Jong-il’s ‘benevolent politics’ and greatness. The People's Councils, which are the local governments, would procure funds and supplies from within their municipal areas and distribute them to residents.

◆ Quality of gifts drops due to economic difficulties

However, due to economic difficulties, the quality and quantity of these rations have gone down since the 1980s. In recent years, residents were given a crudely made toothbrushing gift box and a bottle of cooking oil, and students received a bag of snacks and a pair of sneakers. Even such items were not always provided. Residents who are accustomed to using quality Chinese products bought from the market do not appreciate these gifts nor do they expect to receive them.

The reason the “special rations” on holidays were continued to be doled out by the Kim Jong-un regime, despite their nominal effects, was because of concerns that the authority of the regime would be damaged if it did not show the ‘consideration of the Great Leader for the people.’

Still, it seems that, with the measly "gifts" provided on Kim Jong-il's birthday last February, the "special rations" have become a thing of the past. According to an investigation by ASIAPRESS, at least in a number of cities in the Yanggang, North Pyongan and North Hamkyung provinces, the rations were not distributed at all.

The reporting partner who participated in the investigation said,
"There are no 'special holiday rations' for ordinary residents. The festive atmosphere is diminishing every year. Even factories and enterprises that have to prepare for the rations on their own account have been mostly unable to provide any rations. Police stations and the Security Department (secret police) procured funds to come up with a little cooking oil and sugar.

Next page: End of the special rations...

Next Page： ◆ End of the special rations
1 2
Facebook Twitter はてブ Pocket Feedly
RECOMMENDATIONS
＜Inside N. Korea＞ Embittered Embezzlers: Demoralized and Destitute, Military Officers Turn to Crime to Survive
◆ A 40-year-old major in the military with a monthly wage of only 0.97...
＜Inside N.Korea＞ Expansion of the market economy as the driving force behind social transformation--based on sources from inside N.Korea. (PART7) Information from outside being commodified and spread across the country. The government is losing control of the movement of citizens. by ISHIMARU Jiro
2016/Dec/28 5-3 The control of information is being weakened The Nort...
＜Inside N. Korea＞ A recent flood has left thousands dead: following the flood mass forced-migration of the poor into the affected area. 'Entire villages have disappeared. '
2016/Dec/1 Toward the end of August this year, 2016, a large flood oc...
＜Photo Report＞ Abandoned Elderly (PART2) Elderlies End up as the Homeless after Forsaken by the State and Family
2016/Jul/29 Children and the elderlies have been the biggest victims ...
＜Inside N. Korea＞ Growing discontent with Kim Jong-un regime in North Korea
2018/Aug/1 Recently it seems as if North Koreans’ opinion of Kim Jong...
＜North Korea＞ Defying Debasement: Soldiers Disregard Orders, Hide Off Base to Phone Families
In late April, orders reportedly came down through the Ministry of the...