It is the indicative barometer to know the ranks among the power elites in North Korea by counting the numbers of accompanying the leader, the sequence of introducing them and their titles. If disappeared from the photos of entourage, it may suggest something unusual happened to that figure.

There have been number of speculative news about who would be the patron or the counselor by analyzing the photos of figures around Kim Jong-un after the death of Kim Jong-il. Paek Chang-ryong, an editing staff of Rimjin-gang, has noticed “unusual changes” in the regime through analyzing the photos of entourage of Kim Jong-un from one year ago before the purge of Jang Song-thaek. He explains that Jang Sung-teak’s manner was far beyond the common sense of Kim Il-sung/Kim Jong-il era, which might imply subtle change in the power structure of the regime.

The followings are photo analyses by Paek; 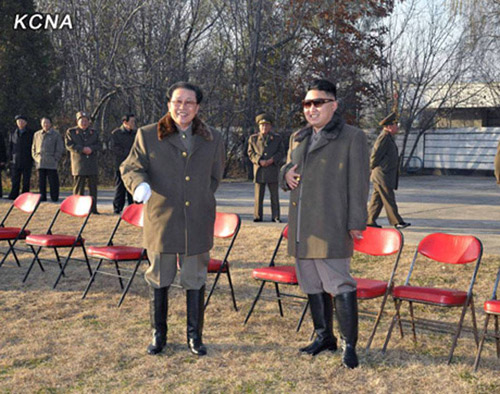 PHOTO 1 Jang Song-thaek is standing in a dignified manner beside Kim Jong-un who is visiting the training field of the mounted company under the direct control of the 534 troops. A number of videos or photos of the day showed that Kim Jong-un and Jang Song-thaek rode horses along with Jang’s wife Kim Kyung-hee or Kim’s sister Kim Yeo-jung. Jang could be viewed as a major figure in the sacred royal family through the footage showing “a day of horse riding by the royal family.” (Quoted from November 19, 2012 of Chosun Choongang Press)

I watched his behavior or manner which appeared on the North Korean official media before his purge on December 2013. I exclaimed “there is no tension at all!”“will he be all right with his rude behavior?” As I check North Korean media everyday, I have been shocked several times by Jang’s behavior and manner in the pictures of Rodong Shinmun and Chosun Choongang TV news.

The thought of “unusual incident” struck my head. The most distinctive event was <the picture 1> in Rodong Shinmun at the timing of less than one year after the death of Kim Jong-il. As a person born and educated in North Korea, I have never imagined that any aide could be so relaxed with smile enough to direct with his fingers and fold hands in his back in front of the top leader. I was really shocked by “his impiety.”

The officials in the picture behind those two must of have had complicated feelings. Some might have weighed upon which rope they should have grasped seeing Jang’s impious manner without fear. Others might have felt jealousy and wariness by his sudden rise.

It might be unpleasant thing to Kim Jong-un that the foreign media and the North Koreans watched Jang’s arrogant look. The official media usually serve for the idolization of the top leader. It could damage the image of Kim Jong-un to appear on the media with his uncle so often, which might have implied that the new leader needed to have “counselor,” or “patron” because of his lack of leadership.

The media provided the evidence amid the gossip that the new ruler was a “novice.”

It can tell at a glance that Jang’s attitude has changed so drastically when compared with his polite manner in front of Kim Jong-il.

Next Page： (part2)* Editor’s notes on North Korean reportersALL REPORTS >>> ARCHIVE(pdf) >>DPRK MAP >>
1 2
Facebook Twitter はてブ Pocket Feedly
RECOMMENDATIONS
Inside The Book 〈Table of Contents〉 JPEG SAMPLE IMAGE
Table of Contents Preface: To the Readers of the English Edition of Ri...
＜Inside N. Korea＞ “Information was sold beforehand to the Americans”...Rumors Spread of Executions as Regime Shifts Responsibility for Failed Hanoi Summit
◆ They say the reason for failure was that “Information was sold to th...
＜Inside N.Korea＞ Second DMZ Created at Sino-Korean Border
ASIAPRESS reporting partners in Hyesan City, Yanggang Province report...
[Video Report] N.Korea Regulation Officer at Market
The video was filmed at a market in Pyongyang in August 2007. A regula...
＜Inside N. Korea＞ Social Unrest and Discontent Over Lack of Special Rations as Security is Stepped Up For Kim Jong-un's Birthday For the First Time
January 8 is Kim Jong-un's birthday; he was born in 1984, which means...
＜Inside N. Korea＞ Power Play: Is China Responsible for Returning Electricity to Border Residents?
An ASIAPRESS investigation found that the supply of electricity to res...