As of this spring, the price of white rice that previously sat at 4,000 - 5,000 North Korean won per 1kg, shot up nationally to 6,000 won, in July. This led to concern among ordinary citizens, only abating when the price started to stabilize around 6,000 won just before the autumn harvest season.

The list below offers a breakdown of the cost of food sold in the market. The current exchange rate (as of 25/Sep) in this region is 1 Chinese RMB for 1,300 North Korea won. In U.S currency, 1,000 North Korean won is around 70 US cents.

A careful look at the list shows that 1 kg (2.2 lb) of potatoes is priced at 400 won which is around 3 US cents ? very cheap considering the general expense of foodstuffs in North Korea. The relatively cheap cost of potatoes can be attributed to the fact that the market our reporting partner visited is close to potato fields.

Our partner explained that this is the cheapest potatoes will be sold at because it was the harvest period. It is expected that, in the urban areas, the price of the same amount of potatoes will double due to additional transportation costs.

The price of salt seems to be reasonable at 800 won (around 6 US cents). In North Korea, the majority of people use only salt for seasoning foods, as soybean paste or sauce is quite expensive. Having said that, salt is required for making kimchi and radish pickles, important side foods prepared before the harvest period and salt consumption is high during this time. As such, even 800 won is not especially cheap for ordinary people. 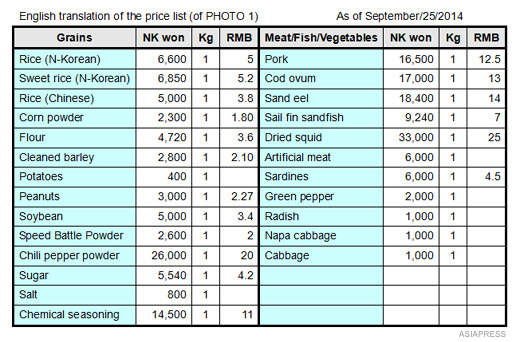 A list of prices of products in the marketplace, as compiled by our North Korean reporting partner. (As of 25/September/2014.) ASIAPRESS

A product unfamiliar to most except for the most dedicated of North Korea watchers is 'Speed Battle Powder', located just under 'soybean' on the list. This is a mixture of corn powder and sugar that has a constitution similar to cake paste when mixed with water. When mobilized by the state for farming activities, workers and students often carry this easy to make snack with them to the worksites. In North Korea, the expression 'Speed Battle' is used for a variety of people's activities in state supervised workplaces to liken their labor to a swift struggle along the path towards victory over an ambiguously defined adversary.

The contents of the list, for the most part, show that most of the foods in the marketplaces are traded using Chinese currency (RMB). The fact that our reporting partner was researching in an area near the Chinese border no doubt contributes to this phenomenon, but it also demonstrates that the Chinese currency is openly circulated in North Korean society.

Impoverishing farming villages
One might conclude that ordinary North Koreans could afford to take a breath once the potato crop makes its way from field to market and into the homes of the people. The reality is, however, that the food situation in farming villages in the northern region was, until recently, quite serious. Our reporting partner from the northern region of the country carried out research in Ryanggang Province in July and sent us the following report:

"In the farming villages, no food remained and people had nothing to eat. Villagers are eating noodles and paste made of potato rumps. There are families who cannot even afford to buy these potato rumps. The only way they can survive is by stealing food from their neighbors".

Potato rumps are the squeezed dregs of the potato that remain after the starch filtering process. It has no nutritional value as it contains mostly bitter fibers and, as such, is usually used as livestock feed. It is reported that the crops in Hwanghae Provinces, commonly known as the grain-belt of the country, are failing to produce adequate yields because of drought conditions. As the weather gets colder and families begin consuming stockpiles needed to last until the next spring it is a serious concern as to how such a food shortage will affect the lives of people in the rural areas of North Korea.
*** Rimjin-gang 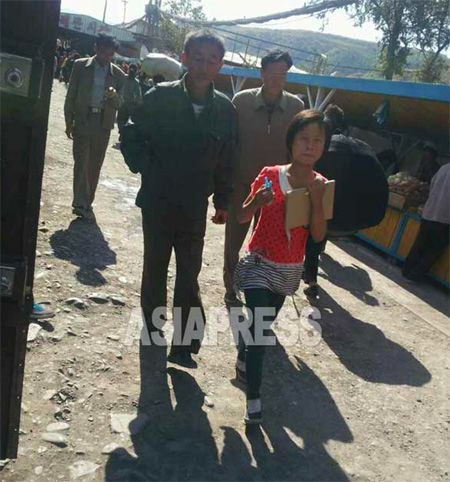 A photo taken around the entrance of the market, near a Chinese border town in northern North Korea. People with large backpacks can be seen heading to the market. (Taken in the middle of September/2014.) ASIAPRESS

Facebook Twitter はてブ Pocket Feedly
RECOMMENDATIONS
＜Photo Report on N.Korea＞ Latest Textbooks for N.Korean Middle & High School Students; Idolization of Kim Jong-un in all subjects
ASIA PRESS acquired 77 North Korean textbooks that are currently used...
Kim Il-sung Portraits replaced by "Kim Il-sung - Kim Jong-il" Duo
2014/October/28 Report by PAEK Chang-ryong, a defector reporterApotheo...
MAP
Rimjin-gang COVERAGE MAP - DPRK and Chinese border zone...
Kim Jong-un regime wary of 'adverse effects' of inter-Korean exchange... Residents imprisoned for watching South Korean dramas
In 2018, the Kim Jong-un regime made its first steps toward improving ...
＜N.Korea Crisis＞ Why is there a Food Shortage Crisis in the Breadbasket Region of Hwanghae? (PART1)
Written by LEE Jin-su2012/May/07 Possible reasons other than a simple ...
＜Inside N. Korea＞ Why is Hunger Getting Worse in June? “Malnutrition has made it impossible to go to work, and some have died from eating wild plants”
The impoverishment of North Korean is getting worse. It has been 1 yea...