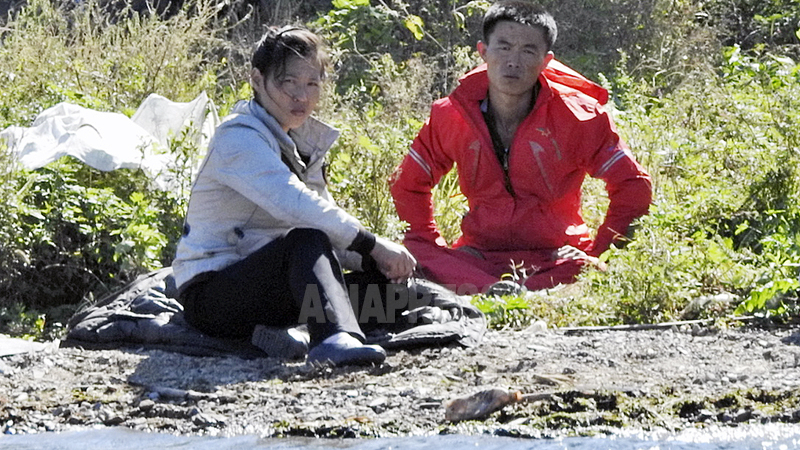 (Photo) The Chinese border is being strictly monitored to guard against the spread of the coronavirus. This photo shows a young man and woman talking by the Yalu River. Photographed in September 2019 from the Chinese side of the river, across from Sakju County, North Pyongan Province, by ISHIMARU Jiro

・There have been cases of infection in Pyongsong, South Pyongan Province, in Sariwon, North Hwanghae Province, and in some areas of Hwanghae Province.
・From now on, contact with people from outside of the region is prohibited. If anyone has entered the area from other regions without permission, they must be immediately reported to the authorities.
・Areas that border China are to be put on high-alert and all efforts will be made to prevent the coronavirus from spreading from China. Those caught smuggling or attempting to cross the border will be severely punished.

The reporting partner from North Pyongan Province said, “Thinking about it now, there have been many signs of the authorities taking countermeasures against coronavirus outbreaks. Restrictions on movement were eased in June but they were tightened again in early July. Freight traffic has also been restricted and traders cannot send their goods by train.”

The reporting partner from North Hamkyung Province immediately called an acquaintance living in Sariwon to ask about the local situation. The acquaintance was said to give the following explanation:

“In Sariwon, anyone suspected of being infected with coronavirus is banned from going outside until a diagnosis is made. Families are said to be put up in ‘isolation inns’ designated by the authorities. Food for those in quarantine is supposed to be provided by the People’s Committee (local government), rather than by the individuals in quarantine.”

ASIAPRESS reported in mid-July that soldiers were being quarantined after a coronavirus outbreak that occurred in June in a military base in Sariwon. A document that was internally disseminated by the government in mid-June also suggested the occurrence of an outbreak.
NextPage: Residents left with unstable livelihoods…

Next Page： ◆ Residents left with unstable livelihoods
1 2
Facebook Twitter はてブ Pocket Feedly
RECOMMENDATIONS
＜Inside N. Korea＞ Poverty-Induced Civil Unrest Prompts Orders to Strengthen Security Around Military Bases, Police Stations, and Kim Family Statues
In North Korea, security at military armouries, security agency facil...
＜Inside N. Korea＞ Field Testing: Regime Releases Thousands From Quarantine for Farming Season, Days Before Receiving Coronavirus Test Kits
According to reporting partners in North Korea, people who had been pl...
＜Inside N. Korea＞ Dead fishermen, drifting boats...What is Kim Jong-un doing to improve the safety of North Korea’s deadliest catch?
Wooden fishing boats, which appear to of North Korean origin, are drif...
"Our Life in Pyongyang Is Not So Easy As You Imagine" - Even in the highest quality apartments in Pyongyang running water is irregular and unreliable
Rimjin-gang 2014/January/20Even in the highest quality apartments in P...
[Video Report] 'Doegurikun' the urban poor who delivers grains from farms to market
The sellers at the Jangmadang are waiting for customers to sell ransac...
＜Inside N. Korea＞ Growing Radicalization of People's Control (3): 14 Year-Old Junior High School Students Taken Out of Class in Handcuffs for Watching a Foreign Film…More than 20 Arrested So Far
There was an incident in the northern city of Hyesan, Ryanggang Provin...
[Video Report] Foot of N.Korean, Japanese Used Bike
◎ASIAPRESS rimjingang YOUTUBE playlistSadong District, where the video...
The Purge of Jang Song-taek - "Self-Criticism" Campaign Launched
2013/December/11 Written by PAEK Chang-ryong, a defector reporter. Rec...
＜Inside N. Korea＞ Kotchebi, the Homeless, Under the Kim Jong-un Regime
2016/Dec/2 “Kotchebi” is a North Korean word only. It is not in the K...
People believe that the sanction should hit hard on Kim Jong-un and the high ranks, but inevitably it is hitting on people’s lives as well……
Resolution “2270” of March 3rd to impose sanctions on North Korea, whi...