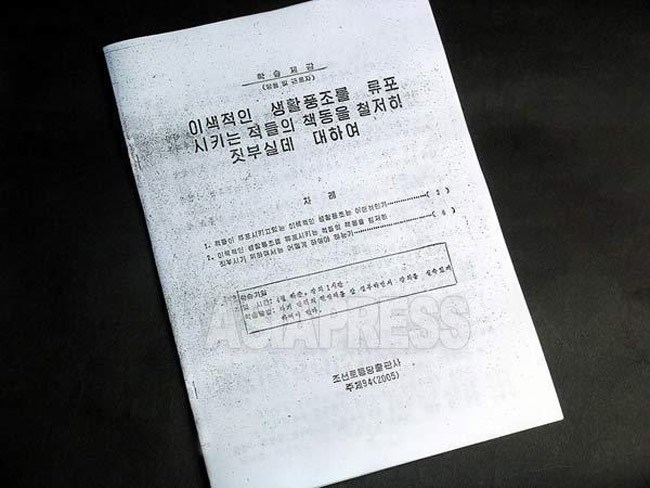 “How to crash the strategy of our enemies that disseminates a harmful lifestyle,” a textbook for the general public in North Korea issued in 2005 (ASIAPRESS)

5-3 The control of information is being weakened

The North Korean government has thoroughly prohibited the access of foreign TV programs, radio stations, newspapers, books, and videos except those that have passed through censorship. The newspapers and books in the Korean language published in Jilin Province, China, also get confiscated on arrival by immigration authorities.  In North Korea people can only enjoy the state-broadcasted TV and radio and have almost no opportunity to be in contact with foreign tourists visiting the country.  That is because the regime considers the information from outside as an existential threat to their governance.
Related Article: ＜Inside N. Korea＞ Expansion of the market economy as the driving force behind social transformation–based on sources from inside North Korea. (PART1)

However, the expansion of the market economy has been a fatal blow to the strict restriction of information getting into the country. Outside information itself has become widely spread and a commodity to be sold in the markets.  Since around 2004 a huge amount of South Korean films and TV drama series have entered into North Korea and gained massive popularity. How do these videos get into North Korea without being blocked by censorship or immigration? 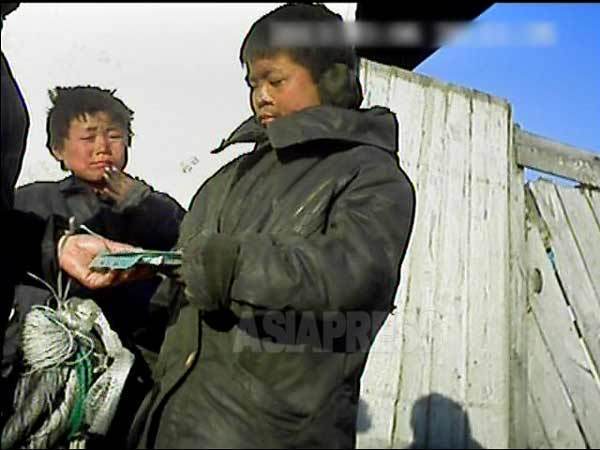 Homeless children selling a VCD or DVD from South Korea at a market. March 2013 in Sinuiju, North Pyongan Province. Taken by ASIAPRESS

The main broadcastings from within South Korea are also transmitted by satellite at the same time.  One can watch them in northeastern China or even in Japan as long as you have a parabolic antenna and a tuner.  Needless to say, one is strictly banned from watching them in North Korea.  South Korean TV series are so popular among ethnic Koreans in China that illegally copied ones are sold at markets a few days after their broadcast by satellite.  At first, they were sold as VCD, having a low quality, but now DVD took it over and offers better quality.  Eventually, pirated South Korean films and TV series get copied and cross the Amrok-gang (Yalu River) and the Tuman-gang (Tumen River) to enter North Korea.
Next page:  The tide of digitized video has gained momentum since the 2000s in North Korea...

1 2
Facebook Twitter はてブ Pocket Feedly
RECOMMENDATIONS
"Our Life in Pyongyang Is Not So Easy As You Imagine" - Even in the highest quality apartments in Pyongyang running water is irregular and unreliable
Rimjin-gang 2014/January/20Even in the highest quality apartments in P...
Secondhand Bookstalls Still Active in N.Korea
The Daily Life of North Koreans:  2014/March/15 Written by PAEK Chang-...
＜Inside N. Korea＞ Student absenteeism on the rise due to excessive requisition from school; a third of students are absent from school in local cities.
2016/Dec/19 Recently the number of student absenteeism has grown in l...
＜Inside N. Korea＞ Cinema Sins: 10 Students Arrested, Condemned Before Crowd of 500 for Watching Foreign Films
◆ Kim Jong-un regime aims to block South Korean culture In the norther...
＜Inside N. Korea＞ The maximum penalty for the "Korean Wave Suppression Act" is death. Still, K-pop is popular among young people.
"These days, Hallyu culture, which is popular among my daughters' gene...
Top Secret Documents on North Korea's 'Tongpyo’: Regime Admits to Suspending the Issuance of Banknotes Due to Financial Woes - ISHIMARU Jiro
We obtained a "top secret" North Korean document. The document, issued...
The Testimony of a Starving Soldier: "Half of us are malnourished"
North Korea Food Situation - 1 2011/August/21 Report by Kim Dong-cheol...
“Hunger Will Kill Us Quicker Than Coronavirus”: 91% Decline in Trade Leaves Vulnerable Locals Facing Starvation
◆ North Korean exports amount to only $610,000 North Korean exports to...
＜Inside N. Korea＞ Chaos in Markets as Vendors Refuse to Sell Food at Government-Set Prices
It has been more than a month since the market’s food prices soared in...
＜Inside N. Korea＞ Another year, another outbreak of Typhoid fever in the North
◆Outbreak caused by state negligence and unsanitary conditions Typhoid...