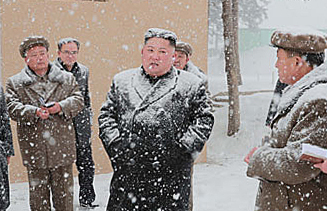 The Kim Jong-un regime of North Korea conducted a total of seven missile tests in January, causing quite a stir in the international community. But how did the residents of North Korea react? Our reporting partners in North Korea surveyed residents' reactions, and surprisingly, there were many voices in support of the missile launches. Their answers suggest that the impoverished lifestyle of their fellow residents has reached its limit and that an air of desperation is hanging over the society (Kang Ji-won).

――The Kim Jong-un regime launched a series of missiles in January. Are the residents aware of this?

"Of course they are. When the regime fired the first one, I wondered why they needed to do it when they also advertise that they have nuclear weapons, but people are saying that they are trying to make the U.S. lift economic sanctions in the wake of the resumption of trade with China."

――"People think the goal is to make the U.S. lift economic sanctions?"

"Many people believe that the missile launches were aimed to get the U.S. to lift the sanctions, although the government says it was done to strengthen national defence. When I spoke to an official from the propaganda department of the Workers' Party in my city and a member of the secret police, they said that 'Although the whole world is in trouble because of coronavirus, we are still under sanctions, so we have to strengthen our position to stop them. China and Russia are on our side, so now is the time to take action."

――How do you think the general public is taking it?

"Everyone is struggling to make ends meet, so even if they open up trade at Sinuiju a little, nobody knows when things will return to normal. Most people say they can't survive without a change to the situation, whether through war or something else."

――Is that what they think?

"It is true that there is a tendency these days to say that the U.S. and Japanese people are the cause of this disastrous situation because simply expressing one’s own dissatisfaction could result in punishment for 'verbal backlash.' Although those are just words, the missile launch really triggered a mood of, "Yes, if we don't act now, we will starve to death. Therefore, we must act,' and I think that atmosphere has grown stronger all of a sudden."
※On January 17, trade by train resumed for the first time in two years between Sinuiju in North Pyongan Province and Dandong in China.

The following are quotes from three people that our reporting partner interviewed.

・A steel factory worker, male, discharged from the military, age unknown
“We have had talks with the U.S., and even though we have nuclear weapons, we continue to be subject to economic sanctions because they still underestimate us. We have to launch missiles or something.”

・A merchant selling bicycle parts at a market, female, in her 40s.
“I heard that although the coronavirus has not come into North Korea, we cannot get in supplies (from abroad) because of the sanctions. This is an attempt to starve us to death. In this situation, we should not only conduct tests but also launch missiles directly at them. We should try it or lose it.”

・A housewife in her 30s. Her husband died at the end of last year due to a lack of medicine.
“I used to do illegal things to eat, but now I can't smuggle (because of the strict crackdown), and I can't cross the border into China to steal. So, I can't do anything. I have no money, and I have nothing to sell at home. I wonder if I can survive if I go to a rural village. The government says they will provide food, but I don't know when. Anyway, win or lose, let's have a war. It has to be settled.”

Even if it leads to war, the residents interview cannot bear further deprivation and crave change. It easy to understand the emotions of the ordinary people who feel trapped. When the COVID-19 pandemic occurred two years ago, the Kim Jong-un regime immediately closed the border with China and strongly restricted trade. For its citizens, the government imposed strong movement controls and restricted business activities. As a result, urban residents who lost their cash income have suffered from poverty. In addition to economic sanctions, the regime's extreme measures against corruption have led to the current impoverishment, but it has repeatedly shifted the blame by claiming "the crushing policies of U.S. imperialism cause the difficulties."