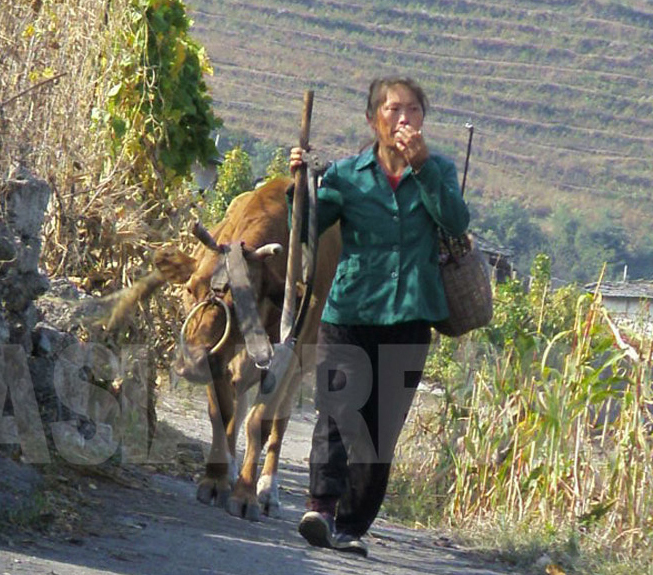 (Photo) The poorest people in North Korea are rural women. Recently, a growing number of women are working as prostitutes in the city. This photograph shows a poor rural woman pulling a cow. Photographed in a rural suburb of Pyongyang in October, 2008 by Jang Jung-gil (ASIAPRESS)

◆ Dragged before a crowd to be condemned

Authorities are stepping up a crackdown after a sharp increase in prostitution across the country brought on by worsening living conditions. In November and December, residents of North Korea’s third largest city, Chongjin, North Hamkyung Province, were mobilized for several “public denouncement rallies” to condemn women arrested for public prostitution. Multiple reporting partners in attendance reported on the scenes. (Kang Ji-won)

On December 23, a reporting partner in North Hamkyung Province told ASIAPRESS, “As the number of prostitutes has increased over recent years due to the worsening living conditions across the country, authorities launched a crackdown in mid-November, going so far as to even conduct sting operations.”

A special security agency known as the “Anti-Socialist Censorship Group,” or “Bisa Group” for short, is charged with clamping down on activities that “disrupt socialist order.

Women arrested by the agency are either sent to short-term forced labor camps or referred to additional ideological education sessions through the Socialist Women’s Union of Korea. In Chongjin, there were two cases in November and December in which women deemed to be “immoral” were condemned at public denouncement rallies.

According to the reporting partner, “Public denouncement rallies are often held in Chongjin to condemn drug use or Korean drama distribution, but it may be the first time that one has been called to condemn prostitution.”

According to the reporting partner, most of the prostitutes in Chongjin and Musan county are from quite far away and have come to work for a temporary period. The brothels they come to are said to be run by small prostitution rings of about 3-5 women who avoid trouble with the law by colluding with the police.

For poor women, “selling their bodies” is a last resort for feeding their families. Indeed, most residents are sympathetic to the plight of women denounced at rallies, saying, “It’s easy to sell your body. Wouldn’t you do the same if facing death?”
Next page :Rural women and teenagers fresh out of high school forced into prostitution...