(Interviewed by ISHIMARU Jiro, editor in chief - Rimjin-gang)
2015/February/28
< This article first appeared in the Korean and Japanese edition of Rimjin-gang on December 2014>

On 25 November, 2014 we conducted a phone interview with a trader from Pyongyang who had recently traveled to a Sino-North Korean border town. He describes the current living conditions of people in North Korea.

ISHIMARU: First of all, I would like to know about the current living conditions of citizens in Pyongyang. Is the food rationing system functioning and do people receive adequate distributions?

Trader: Food rationing continues to operate, at least in the district where I live, though there is a three-month delay for every allocated amount. It is comprised of a lot of brown colored rice. I think it's domestic rice, not imported Chinese rice. We receive corn too. 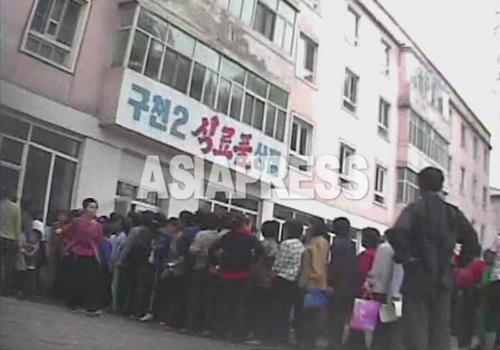 People queue in front of the state-run shop for special rations on the occasion of a national holiday. (Taken by Sim Ui-chu. South Hwanghae Province. September 2008)ASIAPRESS

ISHIMARU: I have heard that it was a lean harvest in early summer because of a drought in the Hwanghae Provinces, the grain belt of the country. Is this the case? DPRK-Map

Trader: Well, I'm not familiar with agriculture and harvests. But there are some rumors that there have been a numbers of deaths of farmers in the Hwanghae Provinces. It seems that the regions of Hwanghae Province have all been affected differently. I have been to XX town, near Sariwon of North Hwanghae Province, last October. People are saying that this year things are not so bad there [as they were last year]. I think there's little doubt that this year's harvest is not as good as the previous year, but I haven't heard about any serious problems related to crops in South Hwanghae Province. There are no signs of a food shortage in Pyongyang city. I also hear the fruit crop was very good this year. The harvest at the Taedong-gang Fruit Farm, which was founded by Kim Jong-il, was reported to have increased 1.5 times since last year.

ISHIMARU: How is the supply of electrical power in Pyongyang city?

Trader: It differs according to district. In the XX District, where I live, things aren't bad. 10 hours average for a day. And it's supplied around the necessary hours. [NOTE: This means it is supplied at times when residents are expected to be cooking and in the evening hours when electricity is in higher demand.] Oh. Yeah, recently everyone received a ration of fish. It was sandfish.

ISHIMARU: It could be related to Kim Jong-un's recent instructions to supply fish for the people. How often do you receive fish?

Trader: We received it on 10th October, the Memorial Day for the foundation of the Korean Workers' Party. The quantity received differed from workplace to workplace. 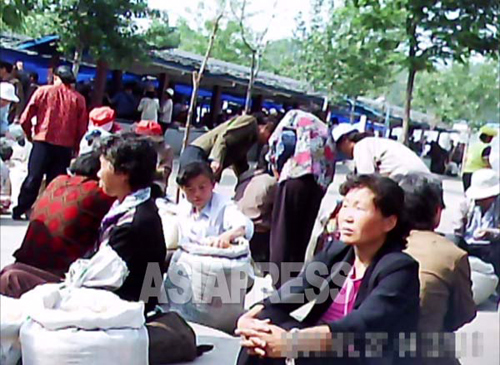 A public marketplace in Pyongyang. Most Pyongyang citizens are making a living by m eans of private business activities. (Taken by Gu Gwang-ho, Jun. 2011) ASIAPRESS

ISHIMARU: Was the fish distribution only for the one-day event? What's happening with the restrictions on the marketplaces? I've heard it said that trading rice is prohibited at some marketplaces in the countryside.

Trader: Rice is being sold in the Pyongyang market, but we are pretty annoyed by the various heavy restrictions. Some Chinese products have also now come under tighter control. I think it reflects the relationship between China and our country; it's become strained as of late.

ISHIMARU: Does that mean that people are not allowed to sell Chinese products?

Trader: No, no. That's impossible to do because most of the products sold at the market are Chinese. But there are clear instructions not to sell products boxed in containers with Chinese characters.
People have been ordered to remove the product from the box with Chinese characters when selling the product. Also, recent instructions have made it impossible to drink any alcohol at the market or in dining-places. The consumption of alcohol is now prohibited in these places.

Trader: Moreover, all karaoke lounges have been shut down in Pyongyang.
(NOTE: Lounges for foreigners are not subject to these restrictions.)

ISHIMARU: According to recent news, the authorities have been taking measures against Ebola, and some foreign visitors have been quarantined.

Trader: The measures for quarantining suspected Ebola patients are very heavy. In many places traffic systems have also been shut down [by the authorities]. The authorities are reluctant to issue traffic permission (travel certificate documentation) for going to other regions. Any person who appears to be feverish is being quarantined for twenty days.

ISHIMARU: Are these people sent to the hospital for treatment?

Trader: No, they're quarantined in their homes. There are a number of campaigns in the subway and on the buses warning the public to be cautious about Ebola. The big screen TV in front of the Pyongyang railway station also repeatedly announces the necessity of the quarantine effort against Ebola. Many people are actually annoyed with this because it affects their travel and business.