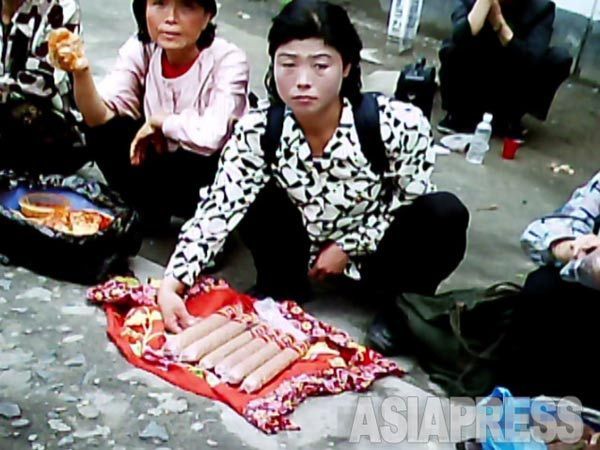 (Photo) A woman selling Chinese-made sausages on the streets in front of a downtown Pyongyang apartment building. Photographed in the Peony District in July 2011 by Koo Kwang-ho (ASIAPRESS)

On August 6, the exchange value of the North Korean won took a massive dive. According to a survey of various cities in the northern region of the country, the won’s value, in comparison to the US dollar, fell by 9.92% and, in comparison with the RMB, fell by 9.15% since the last survey, which was conducted on July 17,

The direct cause is the rise of the US dollar in the international foreign exchange market. However, the North Korean won took a comparatively greater hit than other currencies. This could be due to the impact of the economic sanctions but more time is needed for observations to know for certain.

◆ Markets not in chaos

An ASIAPRESS reporting partner was asked how the RMB is currently being used at markets.

Q. If the RMB rises, the price of the products goes up as well. Has this caused chaos at the markets?

A. There is no chaos whatsoever at the markets. The currency traders check the latest Pyongyang market prices at 10 a.m. each morning to determine the exchange rates.

More than 90% of the money currently used at markets is RMB. Possibly the only ones using North Korean won are the old ladies selling sunflower seeds or pine nuts on the outskirts of the market. These days, even tofu is being sold in RMB. If a customer only has North Korean won, however, the vendor will accept the cash before going to exchange it for RMB that same day.

Q. Before, there was a crackdown on using foreign currency...what about these days?

A. There has always been a crackdown, but it’s fine so long as you’re not caught. Merchants don’t use North Korean money but they always keep some in their wallets. It’s just to show officers, in case they’re cracking down on it. They keep their Chinese money in another pocket.

Q. Are there a lot of complaints from people who don’t feel comfortable spending North Korean money at the market?

A. Until about 2 years ago, some people would report merchants who refused to take North Korean money to the market management office. Nowadays, however, nobody does that. Everyone, of course, now brings Chinese money with them to the market.

Next page : ◆ All prices calculated in RMB...