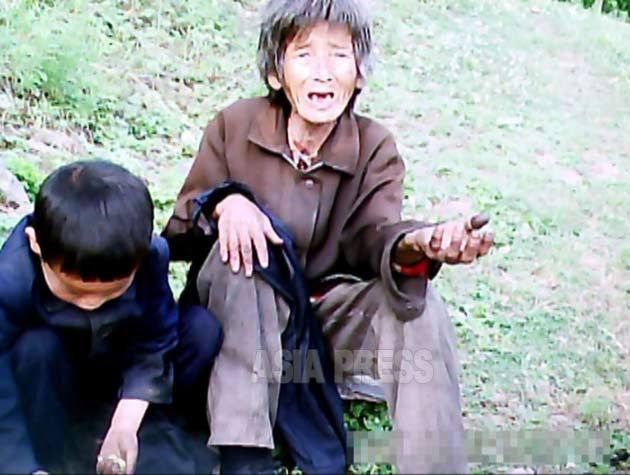 Children and the elderlies have been the biggest victims of the economic difficulty in North Korea.  The social welfare system in North Korea–such as health care and medical service for elderlies–is entirely dysfunctional, in contrast to its excellent portrayal in propaganda.  In fact, I saw a number of old people dying in North Korea.  The state, the society, and even family have abandoned them since they are not useful as a laborer and become a burden to feed.  (Paek Chang-ryong) 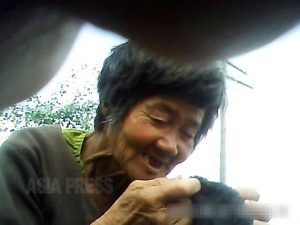 Although we do not know whether she lost a home or was kicked out, she tearfully lamented about a miserable condition. June 2013, in a local city. Take by ASIAPRESS.

Reporter: Excuse me, ma’am, is your home near here?
Woman: I live here but I do not have a home.

Reporter: So where do you sleep?
Woman: At night, I work as a security guard at “Inminban,” neighborhood units.  So I sleep in a guard house.

Reporter: Do you have access to food ration?
Woman: Of course not.
Related article: Kotchebi, the Homeless, Under the Kim Jong-un Regime (PART1) A girl and a boy–probably siblings–sleeping on a street

In North Korea, there are few state-owned care facilities for elderlies.  Based on the social classification system, however, they are primarily for revolutionary soldiers–those who joined the anti-Japanese struggle and the Korean War–and high-ranking government officials.  Ordinary elderlies have no access to the social welfare system.  If no one can take care of them, they have to go on a street to earn money in order to survive by using their old bodies. 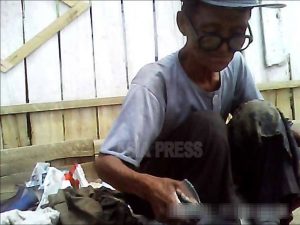 An old man is diligently fixing a plastic product. I wonder how much he manages to earns. June 2013, in a northern part of North Korea. (ASIAPRESS)

A skinny old man was siting on the street and fixing a plastic product.  He lamented “the tiny amount of food ration is not enough to survive.”  The social welfare system is totally debilitated.  He tries to earn cash out of fixing products at a stall.

Reporter: How much do you earn in a day?
Man: Not so much.

Reporter: But you still get food ration, right?
Man: I hardly get one.

Reporter: How much food ration can you get a per month?
Man: I do not know.  It is not enough to feed myself.
Related article: [Video Report] The hidden homeless of Pyongyang 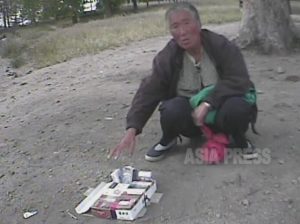 The old woman lives with her son who works as a teacher. Since there is no food ration, she sells cigarette whole day long on a street. She often faces a crackdown by police. They say “You bitch, I’m gonna confiscate them.” September 2008, Haeju City, South Hwanghae Province. Taken by SimUi-chun.