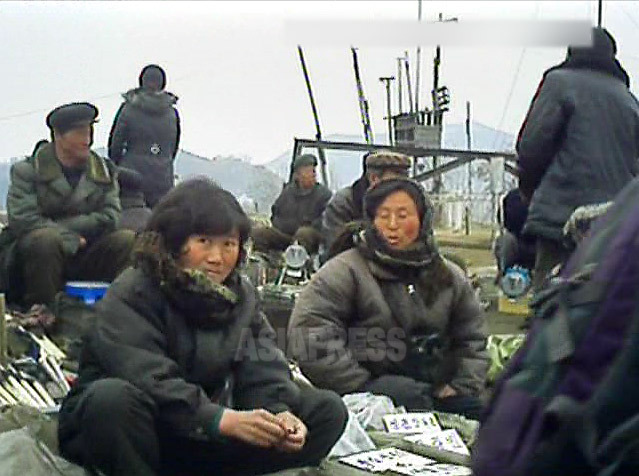 (Reference Photo) It is mostly women who are engrossed by and engaged in fortune-telling. The photo shows fortune-telling in an alley. Photographed in Pyeongseong in March 2013 by Kim Dong-cheol (ASIAPRESS)

In Hyesan, North Yanggang province, fortune-tellers and drug users were forcibly dragged on stage to have their crimes exposed before a crowd. Distinct from the frequent public trials, the new event aimed to make examples of the criminals to the local people. (Gang Jiwon / ISHIMARU Jiro)

The unusual rally was held on the morning of October 2nd at Hyesan Stadium where, at 9am sharp, fortune-tellers and drug users were brought before a crowd of 200 to 300 people mobilized by local citizen organizations and factories.

A resident of Hyesan City, who was at the rally, reported the following:

"Seven fortune-tellers and eight drug users were brought up one by one to have their indictments announced before the crowd. Next, a top-ranking state security officer gave a speech, declaring that "those who commit a crime must pay the appropriate price and receive legal punishment."

According to our reporting partner in Hyesan City, who heard the details of the rally later on, fortune tellers were dragged before the crowd to answer to the crime of superstitious activity.

In North Korea, religion and superstition have long been dismissed for holding back socialist thought and paralyzing the growth of class consciousness. In fact, many defectors testify that religious activities, which were commonly seen up until the 1960s, have all but disappeared.

All religious practices are strictly forbidden, with Buddhism, Christianity, and missionary activities considered by the state be political crimes. In addition, the traditional shamanistic practices of the Joseon period were deemed superstitious and suppressed as well.

However, when unprecedented social unrest spread during the great famine of the 1990s, superstitious practices were revived with tremendous momentum. Since then, it has become commonplace to rely on fortune tellers to help make business decisions, with some in investment and economic forecasting totally dependent on them.

Next page: A resident of Hyesan City who participated in the rally, said the following...