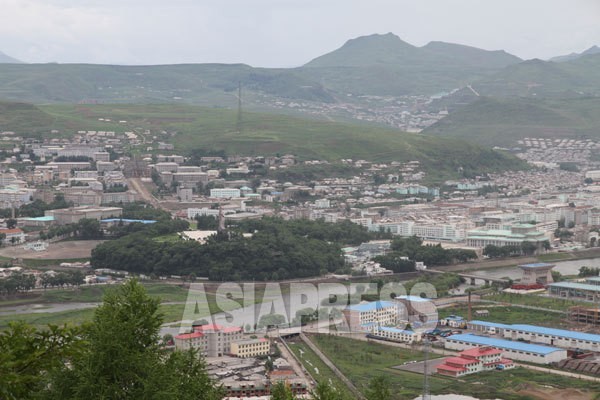 Hyesan city, the site of the rally. Photograph taken from the Chinese side of the border in July 2010 by Li Jun (ASIAPRESS)

A resident of Hyesan City who participated in the rally, said the following:

"The going rate for getting one's fortune read is 10 yuan, with the maximum price set at 100 yuan. As for drugs, Philopon (methamphetamine) has a tremendous benefit. Those who were brought before the crowd at the rally had taken the drug at least 200 times or were guilty of dealing or transporting it. It is said that stimulants are being sold for 100 yuan per gram. Although they are tightly controlled in the country, there are many officials who are addicted to them.
(10 yuan is about 1,635 won in South Korean currency).

According to participants, the fortune-tellers and drug users who were brought to the rally were arrested on stage and then handcuffed to a car. Afterwards, at the police station, they will be given a jail sentence or sent to a labor camp for up to one year.

As Hyesan lies on the border across from Jilin province in China, it is one of the biggest points of information exchange, smuggling, and illegal border crossing. Therefore, it is an area with very tight surveillance and control over what are deemed to be 'non-socialist activities'. It seems that this kind of rally is aimed at making a strong example out of such activities for the inhabitants of Hyesan City to see.