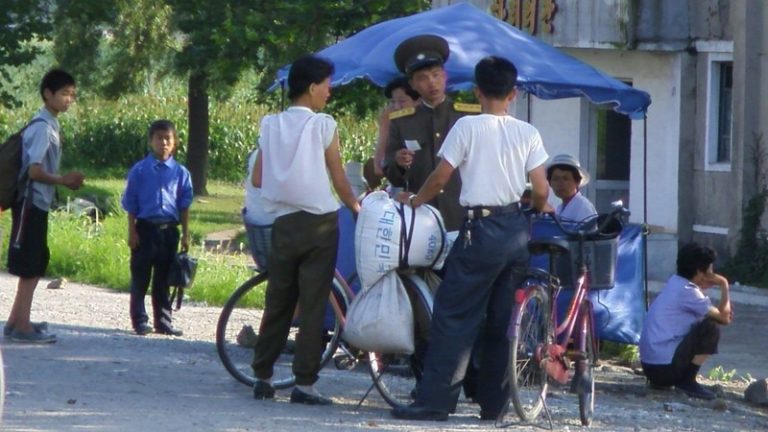 While carrying grain purchased in rural areas, a couple is accosted by state security agents. The couple appear to be wholesale traders who buy grain from rural areas to resell in the city. Photograph taken in a rural area outside of Pyongyang in 2008 by Jang Jeong-gil (ASIAPRESS)

In North Korea, where harvest is in full swing, the government has declared individual transport of agricultural products to be strictly prohibited. (Kang Ji Won)

On September 27, a reporting partner living in the northern region of North Korea said that "since the ban, there has been a strict crackdown on grain transportation at farms and road checkpoints. The price of rice has increased because the individual distribution of grains is almost entirely forbidden nationwide. I think, going forward, prices will continue to rise."

ASIAPRESS has regularly conducted a survey on the price of commodities in North Korea. The price of rice, which was roughly 4,500 won per kilogram at the end of August, rose to the current price of 5,400 won, marking a 17% increase. (1,000 South Korean won = 7,500 North Korean won)

The reporting partner provided further details on the crackdown.
"At the entrance to farms, there are guard posts where state security agents check vehicles for grains. If a person is transporting grain, the amount cannot exceed 15 kilograms. Anything above that requires the approval of the farming management committee and written acknowledgement from authorities."

The government has further announced that “those who steal from farms will be subject to legal punishment and, in severe cases, death”. This is evidence of how desperately hard the government is struggling to secure food.

North Korea has also suffered from extreme heat this summer. The effect on crop yields has apparently led to government fears that it will be unable to provide rations to the military and government agencies. Farmers, meanwhile, are likely to lose an important source of cash income due to the restriction on individual distribution of grains to the cities.

The ban was decreed by the government in early September and, in the area where our internal coverage partner lives, security officers informed citizens of the contents of the ban on September 15th at a morning meeting of the inminban (neighborhood political unit).

Below are the central contents of the proclamation as reported by our partner.

Declaration title: No one is to infringe upon grain.

- Do not misrepresent the weight of grain for personal benefit by measuring with private scales on the farm.

- Individuals who steal or infringe upon farms will be subject to legal punishment and may, in severe cases, be sentenced to death.

Facebook Twitter はてブ Pocket Feedly
RECOMMENDATIONS
＜Inside N. Korea＞ Six high school students caught engaging in lewd acts... Authorities shocked to find foreign pornographic videos
◆Teachers criticized at general meeting In late January, six high scho...
Chang Jeong-gil on Pyongyang's Kangdong County
In the spring of 2008, the Rimjin-gang editorial staff asked our Nort...
＜Inside N. Korea＞Supply of COVID-19 Disinfectant and Protective Clothing Improves…. “If you eat garlic, you won't be infected,” ssayid rresidents.
"In our country, instead of using disinfectants, we burn mugwort plan...
＜Inside N. Korea＞ Worsened power supply paralyzed the train system, reportedly causing deaths in a stopped train
2016/Nov/18 According to ASIAPRESS partners in North Korea, the power...
＜Inside N. Korea＞ Minus 30 Degrees Celsius! Residents Live With Neighbours to Save on Heating as Coal is Rationed to Workplaces
Winters in northern North Korea are cold. Especially in the upper reac...
＜Interview with a North Korean Wwoman＞ Women “Revolt” Against Their Husbands as. Coronavirus MeasuresCoronavirus StrainChanges Marriages Nationwide Relationship [ISHIMARU Jiro]
A year and a half have passed since the COVID-19 pandemic began. Many ...
＜Inside N. Korea＞ Month-Long Lockdown Begins for Third Time in Hyesan as Residents Fear Further Hardship and Starvation
It has now been confirmed that the city of Hyesan in North Korea's Rya...
＜Inside N. Korea＞ “You Must Shoot Anyone Stealing the Harvest": Live Ammunition Distributed at Cooperative Farms For 24/7 Guard
Since mid-September, North Korean authorities have ordered all cooper...
The Purge of Jang Song-taek - "Self-Criticism" Campaign Launched
2013/December/11 Written by PAEK Chang-ryong, a defector reporter. Rec...
＜Interview with N. Korean Residents (Part 2)＞ “The South did nothing for us”: North Koreans Blame Defectors and Moon for Destruction of Border Liaison Office
With the Kim Jong-un regime deciding to destroy the joint liaison offi...