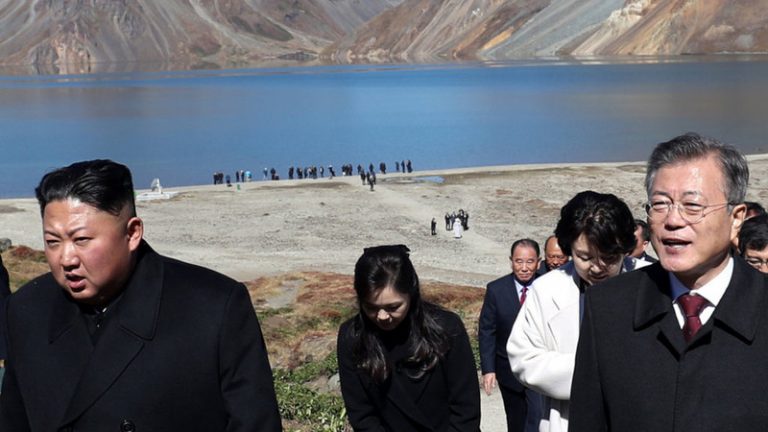 The two leaders of the North and South reach the summit of Mount Baekdu together on September 20th. (Pyongyang Press Corps)

Although I have yet to make a visit, I am told that the sight of Mount Kumgang, located in the southeast region of North Korea, is truly breathtaking. Those who have had the fortune to visit the mountain say that the sight of crystal clear streams flowing through the rocks is spectacular. Along with Mount Baekdu, Mount Kumgang is a place that all South Koreans wish to visit before they die.

President Moon Jae-in, in the Pyongyang Joint Declaration, signed during his visit to Pyongyang, affirmed that tours of Mount Kumgang, which had been suspended since July of 2008 due to the fatal shooting of a South Korean tourist, would be resumed “as conditions mature." The tours are said to be aimed at increasing cooperation and exchanges between the two Koreas.

In November of 1998, during the Kim Dae-jung administration, South Korean tourists first began visiting Mount Kumgang. The tours began after Chung Ju-young, the head of the Hyundai Group, visited Pyongyang and gained approval from Kim Jong-il. Quickly, Mount Kumgang became a popular tourist destination among South Koreans and international tourists, attracting around 2 million people over a span of 10 years.

Aside from its popularity among tourists, the Mount Kumgang project was promoted as a symbol of inter-Korean reconciliation and cooperation during the Kim Dae-jung and Roh Moo-hyun administrations. The land routes were well-maintained on the South Korean side and admission fees were affordable at around 100 USD for a day trip or 300 USD for a three day trip. However, in July of 2008, Park Wang-ja, a South Korean tourist in her 50s, was shot and killed by North Korean soldiers after wandering into a restricted area. This led to the eventual suspension of tours of Mount Kumgang.

Next Page： ◆ North Koreans no longer able to visit Mount Kumgang
1 2
Facebook Twitter はてブ Pocket Feedly
RECOMMENDATIONS
[PHOTO REPORT] Winter, people strive to overcome the water crisis by drinking river water
2015/June/08 Report: Team Mindeulle Edit: ISHIMARU Jiro, Editor in Chi...
＜Article Contribution＞ Why does Kim Jong-un keep launching missiles? Exploring the Truth and Objectives (2) Weapons developed very quickly but mass production will prove difficult
North Korea conducted another ballistic missile test on January 30. Th...
Farmers Starve in N.Korea - Excessive Seizure of Rice For The Military Exacerbates The Rural Food Shortage
2014/April/22 Written by PAEK Chang-ryong, a defector reporterFirst Se...
＜Inside N. Korea＞ "Our expectations were foolish"...Trade Officials Disappointed by Breakdown at Hanoi Summit
◆It would have been better to threaten the U.S. than to have the summi...
＜Inside N.Korea＞ Enforced Mobilization of Unemployed and No-Show Employees to Farm
In North Korea, 200-day battle and combat to support farm village are...
＜Inside N. Korea＞ Expansion of the market economy as the driving force behind social transformation--based on sources from inside N.Korea. (PART4) Marketization leads to rapid development of the transport system. by ISHIMARU Jiro
2016/Dec/22 3-2 The emergence of a marketized transport system The ma...