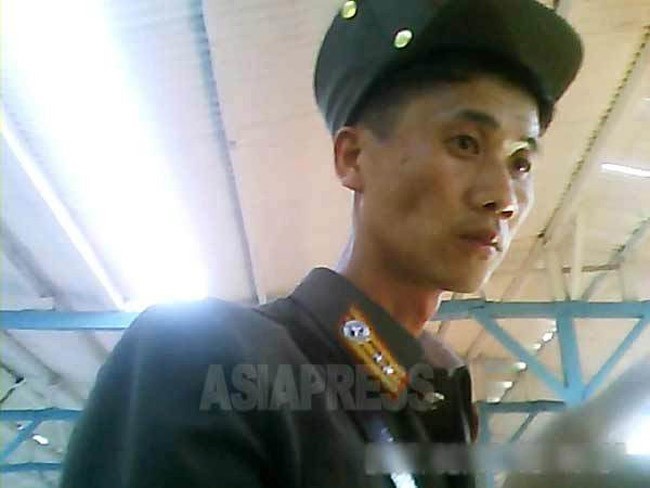 A thin-looking officer shops for groceries at a market. Photograph taken at Hyesan Market, Ryanggang Province, in August 2013 (ASIAPRESS)

“Soldiers have all but disappeared from the streets”

In mid-March, ASIAPRESS asked a reporting partner from Ryanggang Province in the northern region of North Korea to investigate the movements of military personnel in response to the coronavirus crisis.

To provide background, the number of troops in the Korean People’s Army stands at 1 million, slightly less than 5% of the overall population. Soldiers are, therefore, a common sight in any city around the country. Besides when they are on leave or on the move in convoys, soldiers are frequently seen leaving the barracks to shop or eat at local markets.

This is no longer the case, however. As to why, the reporting partner explained:

“To prevent the spread of coronavirus within the military, the nearby Army headquarters has prohibited all soldiers from leaving the base. Military police go around the streets on their motorbikes, patrolling the areas around military and border guard units to monitor the soldiers’ behavior. You can’t see soldiers in town at all.”

The Korean People’s Army holds its winter training every year from December 1 to the end of March. While soldiers and officers are restricted from going out during this period, they would usually still be able to leave their bases in convoys or for grocery shopping. These days, though, they cannot be seen anywhere.
Next page :Enlistment of recruits also faces unusual delay...

Next Page： ◆ Enlistment of recruits also faces unusual delay
1 2
Facebook Twitter はてブ Pocket Feedly
RECOMMENDATIONS
Death on the Yalu: Fatal Accident as State-Sponsored Smuggling Rises on Frozen River
As North Korean exports to China have faced great difficulties due to ...
The Dark Ages: Residents Complain as “Power-saving” Zones Expand Across the Countryside
“We don’t have electricity for even a second. Not a blink. It’s like l...
＜Inside N. Korea＞ Big Brother Never Leaves: Domestic Security Tightened, Despite Leader’s Absence
◆Kim Jong-un is in Vietnam, so Why is Security so Tight Back at Home? ...
＜Inside N. Korea＞ Hyesan Lockdown Lifted Early Due to Local Reports of Starvation
According to multiple reporting partners, the lockdown in Hyesan, Ryan...
Power Supply Recovery and Improved Potato Crop - A brief sigh of relief for N.Koreans
2015/April/06 Report: PAEK Hyan, North Korean reporter, Rimjin-gang Ed...
Paying Off the Pigs: African Swine Fever Spreads as Peddlers Bribe Police to Sell Infected Pork
In South Korea, multiple cases of African swine fever (ASF) have been...