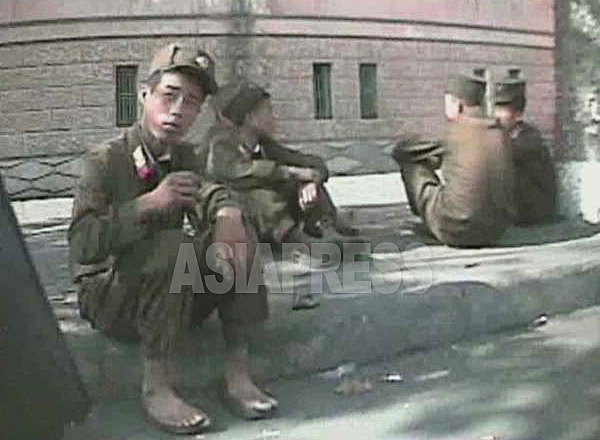 The coronavirus has had another effect on the military. The enlistment of new recruits has been postponed from April.

According to the reporting partner, “Every year, around April 15, there is a high school graduation event where enlisted graduates depart to their units in new military uniforms. This event has been postponed. When I met with an official from the province’s military mobilization department and asked why, he said the physical examinations had been completed but that he had received orders to delay enlistment due to concerns of coronavirus infection.”

※ After graduating from school at the age of 17, men must serve in the military for at least 10 years.

In addition, the new semester for all schools, originally scheduled for April 1, has been postponed.

On March 21, North Korea fired what appeared to be two short-range ballistic missiles off its western coast. The day before, the Rodong Sinmun and other state news outlets reported that Kim Jong-un had personally overseen artillery drills.

This marked the third such test by North Korea this year, with all tests taking place this month. With the repeated tests, the regime aims to improve their capabilities and flaunt its military power.

Meanwhile, U.S. Forces Korea Commander Abrams announced on March 13 that military activity would be suspended for 30 days due to the impact of the coronavirus.

This latest information from reporting partners in North Korea shows that strict orders have been imposed on soldiers, even delaying the enlistment of new recruits. While the regime continues to demonstrate its capabilities through missile tests, the Korean People’s Army is in a state of emergency, wary of spreading the coronavirus. (Kang Ji-won)

1 2
Facebook Twitter はてブ Pocket Feedly
RECOMMENDATIONS
[Video Report] Why Do N.Korean Women Care About Looks? "I want to get attention from the guys.”
The first scene of the video was filmed in Wonsan City, Kangwon Provin...
＜Inside N.Korea＞ Kim Jong-un’s popularity on the rise
North Korean leader Kim Jong-un’s popularity is on the rise, according...
＜Inside N. Korea＞ “Who Would Be Next?”: Residents React as Rumors of Kim Jong-un’s Surgery Begin to Spread from the Border Regions
On April 21, reports of “Kim Jong-un undergoing heart surgery” and bre...
＜Interview with North Korean Residents＞ “Win or lose, let’s have a war” Residents Desperate for Sanctions Relief Support Regime’s Recent Missile Launches to Pressure US
The Kim Jong-un regime of North Korea conducted a total of seven missi...
＜N.Korea photo report＞A Look at North Korea's Impoverished Rural Women... Though they are producers they live in poverty due to exploitation
While North Koreans are very compassionate, there is one occupation th...
[Video Report] Parade Drill by Female Students
◎ASIAPRESS rimjingang YOUTUBE playlist Reporter, Lee Jun of ASIAPRESS,...