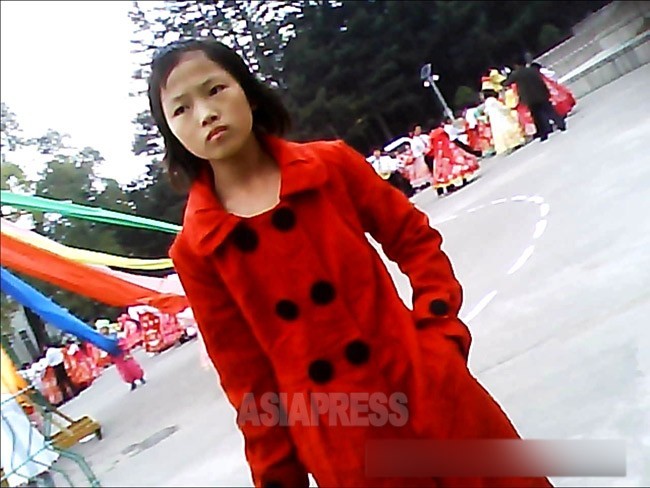 The increased influence of South Korean and Chinese culture can be seen through the fashion of North Korea’s youth. Photograph taken in Hyesan, Ryanggang Province, in October 2013 by ASIAPRESS

This year, ‘guidance’ was passed down from Kim Jong-un, commanding the North Korean people to no longer give their children names that do not match the values of socialism. From now on, names of newborns must be registered in Chinese characters, with authorities reviewing names to ensure they are in accordance with socialism. Names that are not deemed to be appropriate will not be allowed to be registered.

A reporting partner living in the northern region of the country explained, “Kim Jong-un’s ‘guidance’, banning ‘anti-socialist’ baby names, was passed down to residents through various agencies, enterprises, and at the inminban (local political unit) meetings. This problem came about because people were increasingly giving their children South Korean or foreign-style names, as well as giving their children names with wealth-associated meanings such as ‘10,000 won Park,’ ‘Rich Man Kim,’ or ‘Money Han,’ etc.”

In North Korea, ‘guidance’ refers to direct instructions from Kim Jong-un. In accordance with this particular piece of ‘guidance,’ the resident registration division of the police department have blocked residents from registering names that are not written in Chinese characters or that do not match the values of socialism, forcing residents to rename their children.

There are no major differences in the traditional naming cultures of South and North Korea. Children of the same generation in a family will usually all receive the same Chinese character as part of their name. However, given the prolonged division of the Korean peninsula, a gap is beginning to develop between the two naming cultures, with more and more South Korean parents naming their children using native Korean words rather than Chinese characters.
Next page :After watching dramas, North Korean citizens believe...

1 2
Facebook Twitter はてブ Pocket Feedly
RECOMMENDATIONS
From The Editor
To the Readers of the English Edition of Rimjin-gang : ISHIMARU Jiro (...
Voice of the ordinary N.Koreans: “Nuke test only brings hardship to people,” “No better life in Kim Jong-un’s era”
Asia Press has covered the inside situations and responses of North Ko...
“Please, Bury Me Somehow”: Forced Cremations Frighten Elders, Threaten Chuseok Traditions
Back in early April, the North Korean authorities placed an indefinite...
＜Secretly Obtained N. Korean Documents＞ “People Approaching the Border will be Shot on Sight”...Police Notice Reveals Ruthless Coronavirus Measures
The fundamentals of the North Korean regime's countermeasures against ...
Rumors of Jang Song-taek's "fall" already spread in N.Korea
2013/December/04 Written by PAEK Chang-ryong, a defector reporter.Peop...
＜Inside N.Korea＞ Alert for Drone! Ammunition Distributed to Shoot Down!
2017/Mar/24 The North Korean government is said to start a joint dril...
Chang Jeong-gil on Pyongyang's Kangdong County
In the spring of 2008, the Rimjin-gang editorial staff asked our Nort...
〈Photo Report- 6 (a)〉 The Government's Command is for a "Strong and Prosperous Nation" -- but Workers Tired Out at Pyongyang Construction Sites to Build 100,000 Apartments
2013/June/17 Report byGu Gwang-ho(Original report:Aug, 2011) In the ca...
＜Inside N. Korea＞ A Building Burden: Rising Discontent as Regime Extorts Resources from Residents to Support Tourist Site
◆ “Construct a Special Tourist Zone in the Sacred Birthplace of the Re...
＜Inside N. Korea＞ Another year, another outbreak of Typhoid fever in the North
◆Outbreak caused by state negligence and unsanitary conditions Typhoid...