2012/May/04
Written by ISHIMARU Jiro, Editor in Chief, Rimjin-gang

Despite rumors of 100 types of rations that would coincide with the 100th anniversary
Festivities marking the 100 year anniversary of Kim Il-sung's birth were held on April 15 all around North Korea. However, discontent was expressed towards the meager contents of the "special rations" that were distributed by the government in coordination with the event.

Ha Su-ryon, who lives in the northern part of North Hamkyung Province, and is a collaborating reporter for Rimjin-gang, discussed the contents of the "special rations" with the editorial team by phone on the 15th.

"In my area, the contents of the 'special rations' that were distributed were, per household, as follows: a combined total of 15 days worth of corn, white rice, and soya beans, one bottle of beer, cooking oil (250 grams/9 ounce per person), miso, a plastic bag full of soju (alcohol), and candy. Non-food items included an umbrella, a running shirt for males, and other similar items. Households with children received uniforms as well. Households that had not yet received blankets, received them with the other rations." 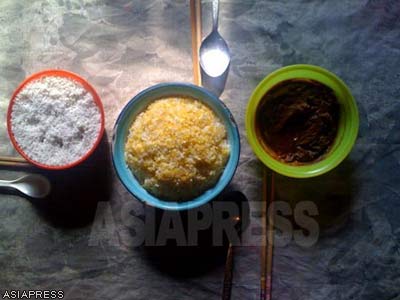 A typical meal: corn is supplemented with vegetables in a miso dressing (right) and salt (left). (March, 2011, Hyaesan, Ryanggang Province, by Choi Gyon-ok)

Birthday celebrations for Kim Il Sung and Kim Jong-il are ranked as the people's top holiday, and every year "special rations" are distributed to the people. However, since the economy began to decline in 1990, the contents of the rations have also continued to worsen. Despite differences across areas, an example of rations from last year in South Pyongan Province, on Kim Jong-il's birthday only a candy set of about 800 grams(28 ounce) and a bottle of soju were received.

In comparison, this year's "special rations" were comprised of dramatically larger portions and more variety. However, Ms. Ha made the following comments on the general feeling of disappointment.
"The leaders had said that as we are becoming a strong and powerful nation, we will receive a lot for this year's April 15 special rations. As this was the 100th anniversary (of Kim Il Sung), there were rumors we would receive 100 varieties of items in the rations. (The rations we received) were so much below our expectations, we were disappointed."

The North Korean authorities had for the last few years repeated big announcements that this year, 2012, would be the year to "open the gates on this strong and powerful nation". But on the contrary, the quality of life over the last few years has continued to worsen. The majority of the people in North Korea understand the realization of a strong and powerful nation is not possible. However, as this year was a special year falling on the 100 year anniversary of Kim Il-sung's birth, rumors were spread that this year's special rations would be a special treat. The elevated expectations of the people seem to have lead to their subsequent disappointment.

Our collaborating reporter, Ms. Ha, also commented on the failed missile launch.
"I hear some people comment that if we had the money that was sunk into the missile launch, it would slightly improve the people's quality of life. Others comment that it was a waste of money."