The Food Shortage is a Man-made Disaster
Let us continue the analysis of the causes of the food shortage in Hwanghae from last time. The reason people are starving to death in farming villages is a result of seizures by the government. 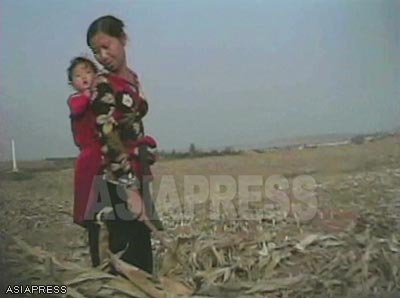 Double Collection to Compensate for Shortages
According to our reports, military food supplies have not been appropriated from merchants and city residents yet as they were last year. Does this mean that military rations are sufficient? Our analysis is that they are not, and the source the food is being taken from has changed (returned to previous sources).

Rimjin-gang reporter Gu Gwang-ho made the following report that requires our attention. He described the scene he saw while gathering reports in a few farming villages in South Hwanghae Province in February.
"While it is typical to see harvested crops drying, I did not see a singe one. I asked the village official why and he replied, 'If the crop is left to dry, some will be stolen by the villagers and the harvest will be reduced. As a result, the army takes the crop away right after it is harvested.' For this reason, there are some villages that have not received any of their allotment from the harvest."

There is currently not enough information to ascertain if this situation is occurring throughout the entire Hwanghae region or not. However, it is unlikely that the shortage of military rations could have been dramatically reduced over the period of a single year. In fact, even this year, malnourished soldiers have been sighted all over the country. When military rations were taken from merchants and city residents, there was a strong reaction by everyone except the farmers. It seems likely that the military is attempting to avoid the same problem this year, and are going to the root of the food source, and simply taking the food directly from the farming villages right after it is harvested.

We also can't overlook the increased demand for food in the capital. According to a report by Gu, who lives in Pyongyang, food supply in the city was temporarily normalized from the summer of 2011. The current level of the food supply in Pyongyang is unknown at this time. In order to inspire loyalty among the residents of Pyongyang during the 100 year anniversary of Kim Il-Sung, we speculate that the government exhausted all its resources to provide normalized food rations for residents in the capital from the later half of last year until the first part of this year. Naturally, the brunt of this burden was borne by the farming villages of the Hwanghae region. 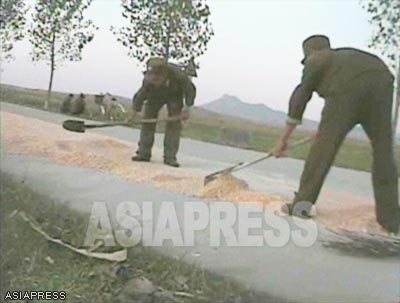 The Korean People's Army soldiers collecting dried corn for the troops. According to a local farmer, these w ere the corns that farmers left out from cultivation, but the army directly seized them from the field and confiscated everything as military supplies after they were dried. (Kwail County, South Hwanghae Province. October. 2008. Taken by Shim Ui-chun) ASIAPRESS

Complete Appropriation of Farming Villages
In this way, in addition to normal delivery, demand for a second delivery of food can be thought of as the cause of the worsened food supply within the Hwanghae region, especially over the last year or two. Residents of South Hwanghae Province who visited China at the end of January last year, sobbingly confirmed the oppressive collection of food for army rations.

"In the fall, farmers wanting a little food would steal some and then save it for later. They would store the food in holes in the ground or hide it in their houses. But when the army came to collect food for their rations, they went house by house and even took the food that was hidden. Now it is January and we have no food."

The number of people that starved to death during the Arduous March in the 1990s has been quoted at one million and three million. It also has been said that the number of people who starved to death in the breadbasket region of Hwanghae was lower than that in the Hamkyung region during the famine. Now in Hwanghae, cases of death by starvation continue to appear one after the other. Over the last ten years, the lack of reports of large-scale food shortages in North Hamkyung Province is a striking contrast.

In other words, despite farmers from the region of Hwanghae being able to somehow provide food necessary for the military and the capital city so far, people are beginning to fall under the heavy burden of the recent growth in demands from the government for increases in rations, mainly for the army. In contrast to city residents who find a solution in commercial activities, the farmers do not have a way to earn cash, and are falling into a dangerous situation. The reason for this is that the country is taking all that it can from the farmers.

In order to understand the famine occurring in the region of Hwanghae, it is important to realize the
direct cause is not an agricultural slump, but due to haphazard and excessive collection by the government that is plunging the farmers into the jaws of death. This is the reason I am calling the food crisis a man-made disaster.