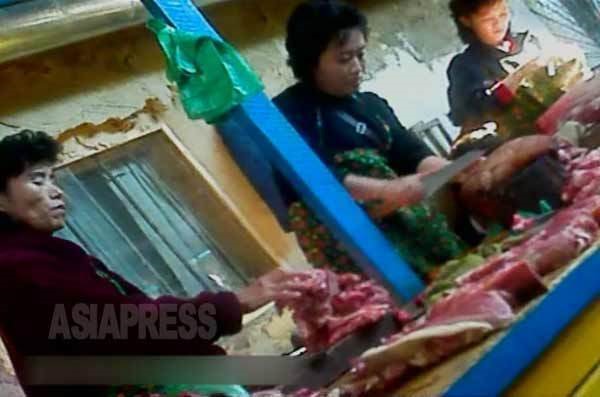 While South Korea and China ready themselves against the possibility of contagion, an outbreak of African swine fever has long been confirmed in North Korea, where, due to a collapsing quarantine, black market pork sales are reportedly on the rise.

According to a reporting partner living in the northern city of Hoeryong, who spoke with ASIAPRESS on June 24, quarantine authorities had cracked down on pork distribution but, since early June, gradually loosened restrictions. As black market sales are rampant, meat traders are secretly selling tainted pork at the market or at their home.

The reporting partner explained, “Residents were reluctant to eat pork because the authorities took such strong measures, including promoting awareness of the disease and buying and incinerating all pork in circulation. However, as word spread that the disease does not infect people and the crackdown became more relaxed, people began to secretly buy and eat pork. I don’t think the authorities are even disposing of the pork anymore.”

Another factor was the simultaneous rise in the cost of other meats. The prices of lamb, mutton, beef, goat, duck, and rabbit have all risen by 10 to 20 percent, reaching almost twice the cost of black market pork.

In North Korea, the outbreak of African swine fever was confirmed in mid-May, prompting a ban on pork sales, distribution, and consumption, with police and quarantine authorities enforcing a crackdown at markets.

As the African swine fever virus remains active in smoked and frozen meat products, it is a dangerous source of infection for live pigs. When infected, the mortality rate is said to be close to 100 percent.

South Korea, meanwhile, has proposed cooperating with the North at the military demarcation line in order to prevent wild boars from spreading the disease across the border. However, the North has been very slow to respond and finds its own quarantine system full of loopholes. In order to stymie the contagion’s spread, the two countries must cooperate quickly. (Kang Ji-won)

Facebook Twitter はてブ Pocket Feedly
RECOMMENDATIONS
Profiles - ASIAPRESS N.Korea Reporting Team
Ishimaru Jiro Ishimaru was born in 1962 in Osaka, Japan. He is the Osa...
activities/distributions
THE OUTLINE OF ASIAPRESS INTERNATIONAL Title: ASIAPRESS International ...
＜Inside N. Korea＞ Investigating the Cause of the Suspiciously Rapid Appreciation of the N. Korean Won
It was at the end of October that the abnormality was detected. The ex...
＜Inside N. Korea＞ Nationwide “Compost Battle” Begins: Kim Jong-un’s Huge Demand for Home-Made Fertilizer Spurs Human Feces Thievery
Following the 8th Korean Workers’ Party Congress that ended in mid-Jan...
[Video Report] What do the ordinary people eat in N.Korea? There are many types of food sold at hawker stalls. (Hawker stalls are individually owned food stalls)
What kind of food is available at hawker stalls in North Korea? In Jun...
The Firing Squad Executions of N.Korean Entertainers - N.Korean State's Crackdown on "Political Videos" (PART1)
2013/November/17 ISHIMARU JiroNews of The Firing Squad Execution case ...