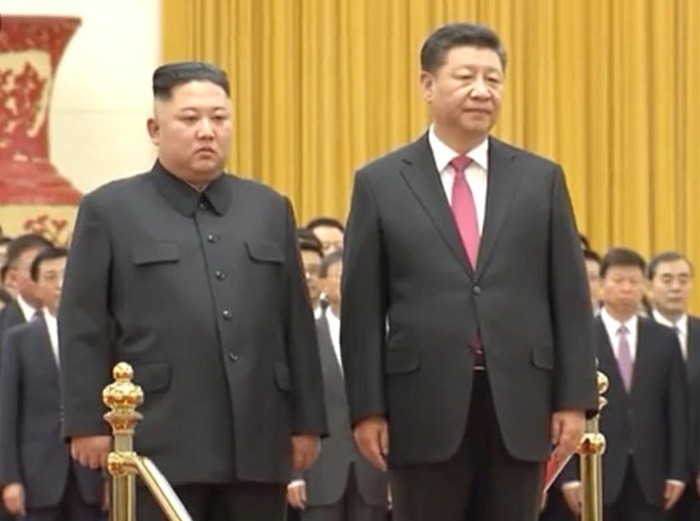 President Xi Jinping welcoming Kim Jong-un during his visit to Beijing. As broadcast in January 2019 by Chinese Central Television

Politically speaking, China is an ally belonging to the same socialist camp and is well-remembered for fighting alongside the North in the Korean War. On the other hand, China has reformed so much, turning away from socialism as it has opened to the world.

For forging diplomatic ties with South Korea in 1992, China has not been forgiven either. Finally, North Koreans fervently oppose China for the strong pressure it exerts on the country from time to time.

Economically speaking, China has proved to be a massive benefactor. North Koreans can not help but be grateful for a country responsible for so much of its foreign currency earnings and 90% of its trade.

At the same time though, North Korea’s economic exchanges with an ever-evolving China have allowed for an unprecedented amount of outside information and capitalist culture to penetrate North Korea over the last 20 years. On top of this, China has pressured the country, both directly and indirectly, to similarly make reforms and open. Lastly, with a shared border of about 1,400 kilometers, China is also a major security concern for North Korea.

May 2011 was to be the last time Kim Jong-il visited China. He would die suddenly just 7 months later and, thereafter, North Korea entered the Kim Jong-un era.

Kim Jong-un, young and inexperienced, had no track record as a leader in the eyes of his people. He purged Jang Song-taek and other influential figures who failed to demonstrate absolute obedience and loyalty, establishing himself at the center of a monolithic leadership system. On foreign policy, Kim prioritized the development of nuclear weapons and missiles as a strategy for his regime’s survival.

The Kim Jong-un regime largely relied on expanding trade with China as a driving force for economic growth. Despite this, the regime went ahead with nuclear tests in 2013, 2016, and 2017, ignoring strong protests from the Chinese government. During these times, harsh rhetoric targeting China was used frequently by citizens at ideological study sessions, such as “If Japan is the enemy of the last 100 years, then China is the enemy of the last 1,000 years” and “We should not have any illusions about China”.

These days, anti-Chinese sentiment has spread across North Korean society, with even relations among ordinary citizens of the two countries worsening.

Ordinary North Korean citizens are outspoken in their criticism of the Chinese, calling them “thugs” and saying such things as “Those jerks think only of themselves,” or “Only the poor Chinese traders and tourists come to North Korea,” or “We just have to deal with them because our country is poor”, etc.
Next page : ◆ Protesting against China, the main culprit…