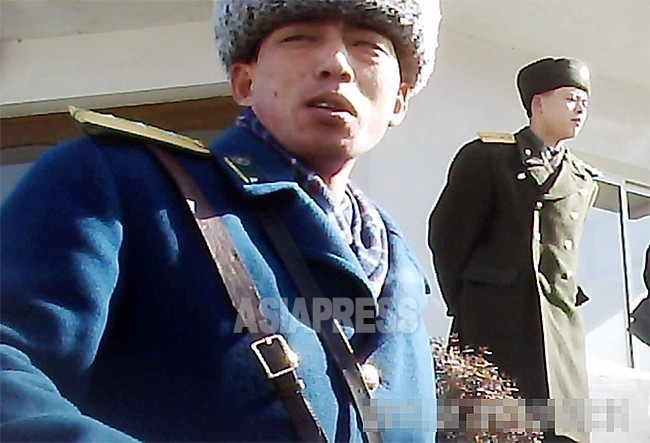 (Reference Photo) A traffic warden in a blue uniform stands at a checkpoint. Taken in South Pyongan Province in January, 2011 by Kim Dong-cheol (ASIAPRESS)

In late May, police in Hyesan City, Ryanggang Province, began a massive investigation into a burglary of the ‘Sun-kyung Company’ a trading company affiliated with the Ministry of People’s Armed Forces, a reporting partner told ASIAPRESS in early June.

Computers, business logs, and mobile phones from an office of the secret police inside the Sun-kyung building have disappeared, said the reporting partner tracking the incident.

As the theft occurred in the border city of Hyesan and targeted a military-affiliated organization, the investigation is being carried out jointly by the Security Bureau of the secret police and the military’s political monitoring office, the Defense Security Command. The investigating bodies are primarily concerned that the stolen data may be smuggled out of the country.

Few details of the investigation are known, but there are indications that the police suspect the crime to have been an inside job, committed by an employee of the Sun-kyung Company. In addition, the investigators have placed residents of Hyesan City under major surveillance.

According to the reporting partner, “The investigating agencies have declared the incident a ‘ploy of hostile forces’ and are now in a state of emergency. They say that they will get to the bottom of this one way or another.” (Kang Ji-won)