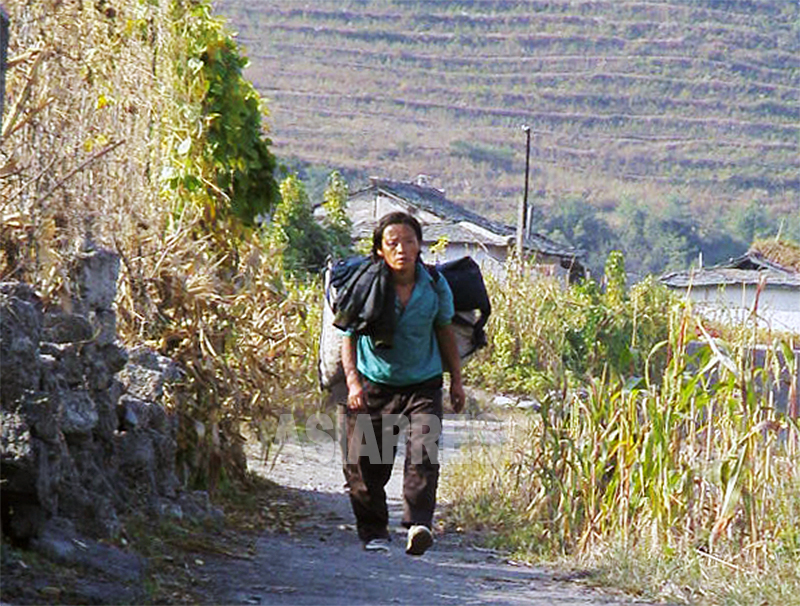 Those most unfortunate are the farmers. The ones reaping the harvests are the ones who are starving. Photographed by ASIAPRESS

North Korea is running out of food. The Kim Jong-un regime requested official assistance from U.N. agencies in February and the World Food Program (WFP) announced that the country will fall short by 1.37 million tons of food this year.

The Moon Jae-in administration has decided to provide $8 million in humanitarian aid through U.N. agencies and is considering providing large-scale food aid bilaterally as well. Following the collapse of the Hanoi Summit in February, through to early May, when the regime test-fired short-range missiles, however, inter-Korean relations were totally frozen. To turn the tide, some members of South Korea’s ruling party are now suggesting that food aid may be the key.

Meanwhile, voices amongst opposition parties and the media are expressing the suspicion that the food shortage in the North is being exaggerated, pointing to figures that show the price of rice to be lower than it was last year.

Related Article: ＜Inside N. Korea＞ “People are starving”: South to Send Support...But Will Food Reach Those Most in Need?

◆ The price of rice has in fact fallen

The ASIAPRESS North Korea reporting team, along with our reporting partners living in the North, conduct and release market price surveys 2-4 times per month with data from the northern provinces of Ryanggang, North Hamkyung, North Pyongan, and Pyongyang. The only entities known to conduct such investigations and surveys of price trends are the South Korea-based outlet, Daily NK, and ASIAPRESS.

The main focus of our surveys are rice, corn, gasoline, and diesel fuel. In addition, we examine market exchange rates of North Korean won to Chinese yuan and U.S. dollars. Price trend data has been collected since May 2017 and is available for interested readers to browse. 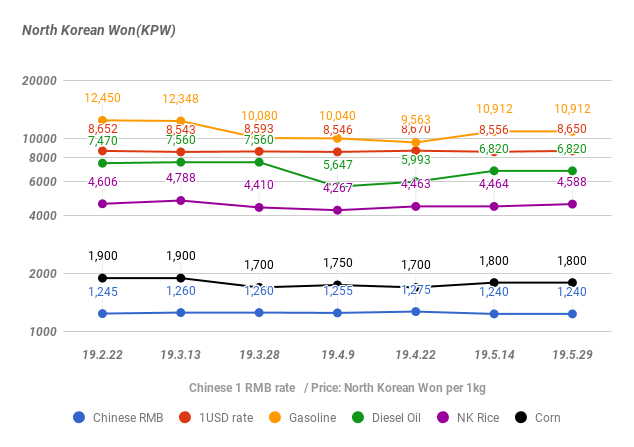 Common sense dictates that market prices are determined by the relationship between supply and demand. Using this logic, some in South Korea point to the stabilizing or falling market price of rice to claim that North Korea’s food shortage is exaggerated. Those who make the claims believe that, if there truly was a shortage, the price of rise would have gone up.

According to our survey, the price of white rice has floated between 4,200 and 5,500 won over the past year. Although it has fluctuated abruptly at times, it has generally been quite stable. This year, the price has stabilized further, sitting between 4,200 and 4,600 won, with rice cheaper than last year.
※At the end of May, the value of 1,000 South Korean won in North Korea was about 7,200 won.

Meanwhile, our survey of cooperative farms found that, over the last year, temperatures were very high, with little rain, resulting in severe crop failures.

So what can explain the stable price of rice?
Next page : Market prices are for Chinese rice...

Next Page： ◆ Market prices are for Chinese rice
1 2 3
Facebook Twitter はてブ Pocket Feedly
RECOMMENDATIONS
＜Instant Interview＞ Even North Korea’s Elite Soldiers Carry Parasites
2017/Nov/20 On November 13, a North Korean soldier posted at the JSA (...
＜Photo Report on N.Korea＞ China Controls North Korean Economy (1) Hard To Survive If China Places Sanctions on DPRK
2017May/15 It is obvious that North Korea is economically dependent o...
＜Inside N. Korea＞ Penniless Protectors: Underfunded Orphanages Struggle to House N. Korea’s Homeless Children
It was not long ago when homeless children, known as ‘Kotjebi’, were a...
More Kotchebi Homeless Children Under the Kim Jong-un Regime
2014/February/05 Written by PAEK Chang-ryong, a defector reporterTwo y...
＜Inside Report＞ Bad Reputation for Kim Jong-un’s wife, Ri Sol-ju, is spreading with an image of “Chick” who loves extravagance and splendor.
When asked about Kim Jong-un’s evaluation to North Koreans, their repl...
＜Interview with a North Korean Wwoman＞ Women “Revolt” Against Their Husbands as. Coronavirus MeasuresCoronavirus StrainChanges Marriages Nationwide Relationship [ISHIMARU Jiro]
A year and a half have passed since the COVID-19 pandemic began. Many ...