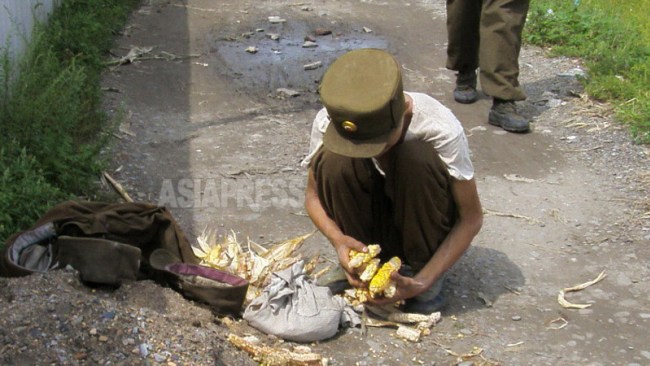 A South Korean colleague’s two sons joined the military. The period of service is two years. On looking the pictures taken at the time of visiting their sons in the military, the parents seem to be far more delighted than their sons, because the family never has been separated for such a long time.

What about North Korea? The son of our reporting partner in Northern area, Choi Ok (false name), join the military two years ago. Right after graduated from a high school, he joined the military at the age of 17 and was assigned to a troop stationed close to the DMZ (Demilitarized Zone) in North Hwanghae Province.

She visited her son in the military as she concerned him. Tension surrounding the Korean Peninsula builds up as Kim Jong-un regime repeats nuclear bomb test and rocket launching. However, what really concerns her is not the outbreak of war. She is nervous about it whether her son may be starving at the military.

Mrs. Choi said “I am not sure whether I can see him, but I ask them to deliver cash (to my son). It would be a big problem if I don’t do that.” It is not unusual to see young people to be crippled because of malnutrition after they joined the military.

It is known that the People’s Army of North Korea has more than 1 million members. It is 5 percentage of its whole population, which is equivalent to 6.5 million people if it were Japan. It was late 80s since the malnutrition in the military has become widespread. The government could not afford to feed such a huge military force due to worsening economic ability. In addition to the absolute shortage of food supply by the government, corrupt officers in the military embezzled supplies. As a result, malnutrition among low rank soldiers became prevalent.
Related Article: North Korean People’s Army Facing State of Starvation

ASIA PRESS has investigated the food situation of the People’s Army during the last 8 years with reporting partners in North Korea. While there are troops with sufficient food supply, a large number of troops provide their soldiers with a handful of corn grains, dozens of thumb sized potatoes and salt soup for a meal. Even a noncommissioned officer replied that half of the soldiers in his troop suffered from malnutrition.

After Mrs. Choi’s son joined the military, one more year is added to the existing service period, which means 11 years for male and 7 years for female soldiers. The reason to extend the period is because the regime has difficulties in recruiting soldiers. North Korea had experienced serious social chaos and hunger since the middle of 1990s, which resulted in, by starvation, mass death of children including infants. If survived, they have a small build. Furthermore, they did not want to give birth because of harsh living condition.

Majority of soldiers in North Korea are from the famine generation now. The shortage of soldiers is filled with the extension of service period and recruitment of female soldiers.

Mrs. Choi’s son will be discharged at the age of 28. He must stand hunger in the military during his precious youth without studying or dating. Mrs. Choi also can’t help enduring that period of ten years, worrying about her beloved son every day.

Facebook Twitter はてブ Pocket Feedly
RECOMMENDATIONS
[Video Report] What do the ordinary people eat in N.Korea? There are many types of food sold at hawker stalls. (Hawker stalls are individually owned food stalls)
What kind of food is available at hawker stalls in North Korea? In Jun...
Love Thy Neighbor: N.Korean Public Confused as Regime Prohibits Criticism of China
◆ Is China not the “1,000 year-old enemy”? Since mid-January, the Nort...
Young Defectors Escapes to Japan to Be with Her Mother, 62 Years After the Start of the Repatriation Project to North Korea
On December 14, 62 years ago, the first ship of the "Repatriation Pro...
＜Trump-Kim Jong-un Meeting＞ Cynical Citizens Told “Not to Fantasize” by Pessimistic Party Officials
◆ Lessons learned from the disappointing failure of Hanoi Kim Jong-un ...
＜Urgent ＞ What is happening inside N.Korea with COVID-19？ The government heavily crackdown on hoarding and restrict movement to other areas
North Korean authorities officially acknowledged that the Omicron var...
Rimjin-gang - Periodic Survey - Price List (2011/June 8 - 14)
2011/June/20 Currency Unit : North Korean Won=KPW Musan County North ...