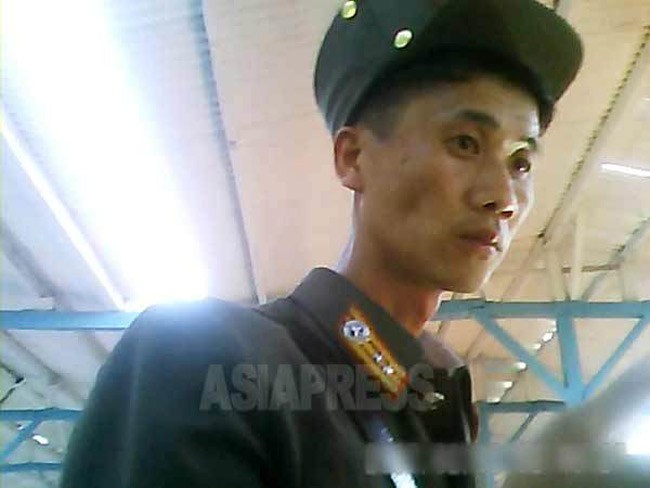 This army officer was making purchases at a market. He is noticeably emaciated. Taken on August 2013, in Hyesan City, Yanggang Province (ASIA PRESS)

“North Korea is a military power.”

Over the course of the last ten years the North Korean regime has succeeded in imprinting the image of the nation’s strong military in the collective conscious of the world.

The DPRK state television projects only the most favorable features of the People’s Army to the domestic and international audiences: rocket launches, military parades, tank manoeuvres, and artillery firing exercises. Such projections of power are often accompanied by aggressive sabre rattling that vacillates between threatening to turn Seoul into a “sea of fire” and launching pre-emptive nuclear strikes on enemy states. 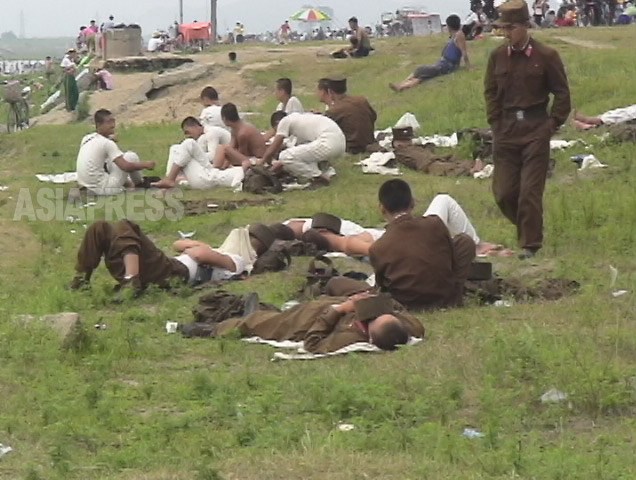 Soldiers stretched out beside a river during a break. Taken by Lee Joon on August 2006, in Cheongjin City (ASIA PRESS)

Japanese television media have repeatedly used videos provided by the North Korean government for their own reports. The North Korean government often invites foreign media to cover military exercises and weapons demonstrations; projections of power that often accompany the more grandiose events on the Pyongyang calendar. Hungry for a scoop, foreign media outlets flock to North Korea to discover that they are only permitted to record yet another military parade in which row after row of goose stepping soldiers follow behind self-propelled rocket launchers.
Related article: <Kim Jong-un’s Starving Soldiers – “Just a spoonful of oil for me…” A soldier pleads for grace>

The North Korean government works hard to maintain the idea that it is a strong military power. Manicured images of its military hardware play an important role in the state propaganda. That is why they invite foreign media to cover these events. Consequently, the international media contributes to maintaining the myth of Kim Jong-un’s military might. 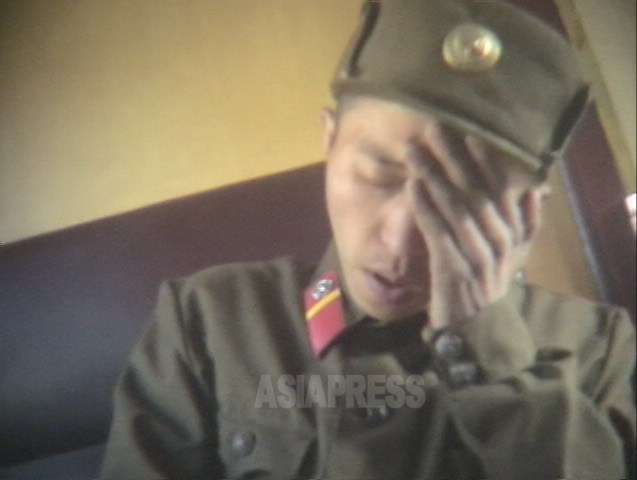 Encountered young soldier at a train said “I am returning home because I am too feeble.” Taken by Lee Joon at South Pyongan Province on June 2005. (ASIA PRESS)

◆ The Military producing the starved

What is real situation of the North Korean People’s Army? The facts are true: They are striving to develop mass destruction weaponry, have more than 50,000 commandos and a large number of long range canons that aim at the South Korean Capitol, Seoul. This is truly intimidating to South Korea including neighboring countries. But, many defectors from North Korea assert in one voice that the North can never be able to carry a full-scale war.
Related article: 〈Photo Report 5〉 Malnutrition Rampant Among The People’s Army

A reporting partner in North Korea, Koo Gwang-ho talked about the reality of the soldiers in the People’s Army: “It is common to hear that people starve to death in the military. When a soldier died, they notice it to his parents. They explain the cause of death to the devastated parents, saying “the soldier died of diarrhea.” Not so foolish parents easily recognize that their son starved to death. Having heard that kind of story, parents weep when their son gets the notice of conscription.” 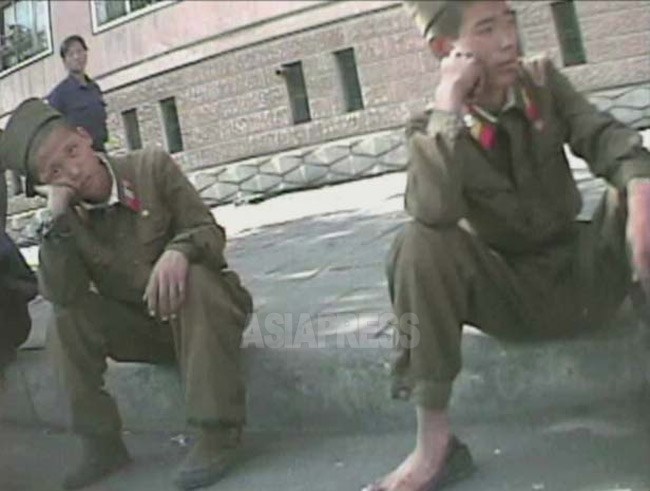 Young, exhausted soldiers are sitting at a plaza in front of a station. Taken by Shim Eui-cheon at Sariwon City on October 2008. (ASIA PRESS)

North Korean people said sarcastically, “Is it possible for a starving army to carry a war? It must be true that they keep a secret military for real battle once the war occurs.” (ISHIMARU JIRO)

※ Returned home by the military is ‘a sick bail.’ It is based on the judgement that the soldier may die if he is abandoned without care at the barrack. The worst is classified as “feebleness 3,” followed by better condition of 2 or 1. The military sometimes demands several kilograms of food to the parents in order to have their son come home with the feebleness 1-2 condition.

Facebook Twitter はてブ Pocket Feedly
RECOMMENDATIONS
Top Secret Documents on North Korea's 'Tongpyo’: Regime Admits to Suspending the Issuance of Banknotes Due to Financial Woes - ISHIMARU Jiro
We obtained a "top secret" North Korean document. The document, issued...
"Artificial Meat" - A Vital Source of Protein For the People
The Daily Life of North Koreans2014/March/04 Written by PAEK Chang-ryo...
[Video Report] Why Do N.Korean Women Care About Looks? "I want to get attention from the guys.”
The first scene of the video was filmed in Wonsan City, Kangwon Provin...
＜Inside N. Korea＞ Vagrant children are being captured and sent to the army at the age of 17.
◆ Hungry children on the run The economic downturn continues due to s...
＜Inside N. Korea＞ Exchange Rates for Foreign Currencies Skyrocket After Resumption of Railroad Trade; U.S. Dollar rises 24%
Recent reports indicate that the prevailing exchange rate between the ...
＜Inside N. Korea＞ Digital Dictatorship: Top Leadership Forced to Take Computer Classes as Kim Jong-un Orders Officials to “Keep up with the times”
The North Korean authorities have recently ordered senior officials in...