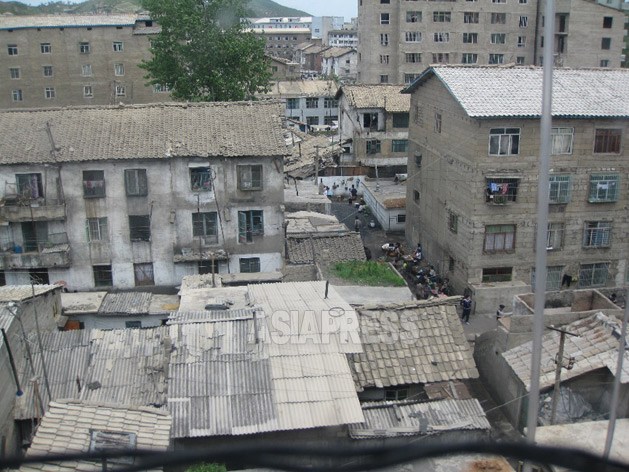 The apartment on the right side still has a pile of blocks and the construction of the outside wall has not completed. However, people have already started to live there. June 2008 in South Pyongan Province. Taken by Paek Hyang (ASIAPRESS)

4 Property transactions in the black markets

In North Korea, the Party, the government organizations, and the state-owned factories need to provide workers with housings for free.  Properties such as houses and lands do not belong to an individual since property rights do not exist.  However, one has to pay money to get a house both in a city and a rural area since they are also a subject of market activities.

As the state could not grant housing to workers because of a worsening housing situation, the black markets took the role of provider instead.  This is the same phenomena as the emergence of the black markets when the food rationing system had stopped.
Related Article: ＜Inside N. Korea＞ Expansion of the market economy as the driving force behind social transformation–based on sources from inside North Korea. (PART1)

It is widely known that land is owned by the state in North Korea.  All the housing also belongs to the nation as well as the social cooperatives, such as collective farms. No one has his or her “own” house except a small number of those who owned homes built before 1958, mostly those built during Japanese occupation.  Therefore, buying and selling, leasing, and mortgaging are all prohibited. [Note: In 1958, Kim Il-sung proclaimed that the socialistic reform of urban manufacturing industry and capitalistic commerce and industry had been completed.]

Since the baby boom in the late 1950s, after the Korean War, North Korea has suffered from chronic housing shortages.  In the 1980s, at a time when the “after war generation” had reached an age of marriage, the housing supply from the state could not catch up to an ever increasing number of the population.  It was especially common, in the urban areas, for two families to share a house divided by a single curtain. 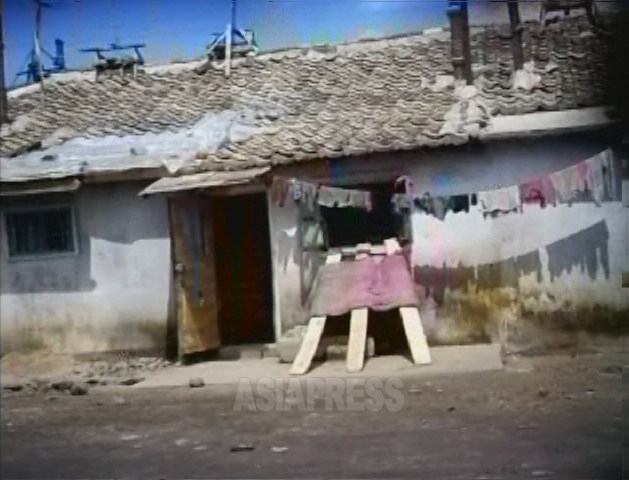 The phenomenon of two families staying in the same house was called “living together.” It was very common. This is the entrance of a Tenement house called “harmonica” near a city. August 2007 in Sariwon, North Hwanghae Province. Taken by Lee Joon(ASIAPRESS)

Since the beginning of arduous march in the 1990s, the housing issue has experienced a structural transformation.  People in extreme poverty started to sell the houses as a last desperate choice for money.  A number of deaths due to the impending starvation ironically created a “housing supply.”  For those who were not severely affected by the arduous march, it was a great opportunity to move into a bigger and more convenient house.  Currently in all parts of North Korea regardless of a city or a rural area, “the housing market” is functioning.  However, since the legal system has yet to change, it is still illegal to engage in the housing market.

To live in a state-owned house one must be issued a “Government Residence Permission Certificate,” from the “Housing arrangement Division” under the Provisional People’s Committee of North Korea, a local administration. People buy and sell their permissions; the transaction for the government certificate for the right to use a house takes place.  Those who want to purchase or sell houses pay bribes to officials in the “Housing arrangement Division” and then change the user’s name for the house.
Related Article: ＜Inside N. Korea＞ Market survey shows “Resolution 2270”, the toughest-ever sanctions, didn’t work

Even veterans and high ranking officials of the Party, the police, and the intelligence agency are not provided housing by the government when they move to new places.  Those who want to buy a house need to “purchase” a state-owned house via a “housing transaction”.

In this transaction, illegal property agents called “Kogan-kun” play the role of middleman, earning commission fees.  They collect necessary information from buyers such as preferred layout, facilities, location, and price and competitively carry out their business.
Next page: 4-2 Housing prices...