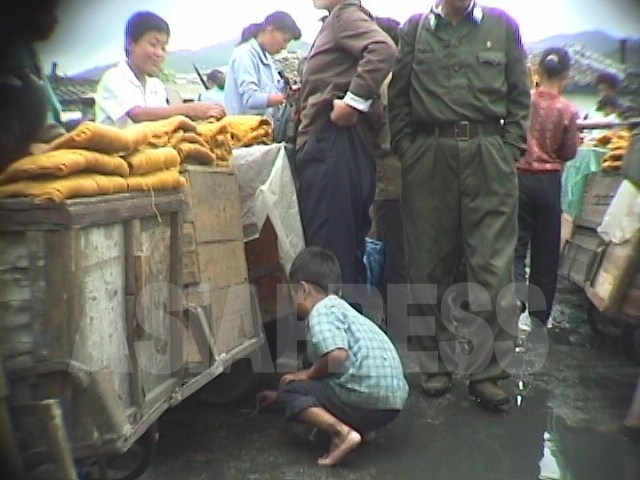 Children picking up leftover noodles at a black market. In October 1998, the period called the “Arduous March,” in Wonsan, Kangwon Province. Taken by Ahn Chol (ASIAPRESS)

It is widely known that the market economy has rapidly developed in North Korea since the period of the “arduous march” in the 1990s, at the time when the entire nation was in chaos.  Similar to other socialist states, North Korea used to sustain the planned economy by keeping it under the control of the regime.  The production and the distribution of the food supply, consumer goods such as daily necessities including tableware, furniture, and essential goods and services such as water, electricity, and housing were all provided by the regime.

However, the government started losing control over the economy in the late 1990s as trading in black markets emerged and spread across the country.  For the past 20 years, the market has grown hundreds of times bigger and has been drastically developed and become more sophisticated.  Nowadays, the market economy has become the de facto driving force of the North Korean economy.

This report is an overview of the expansion of the market economy in the areas of commerce, property, and transport and traffic in North Korea.  Furthermore, it analyzes what kind of impact the economy has on people’s lives, their perceptions, and the system of social order.

It is well known that North Korea has systematically implemented strict control of information and the concealment of truth, the toughest-ever control in the world.  In recent years, it has not even published key economic indicators, statistics, or government budgets, leading to an absolute lack of necessary information for outside analysts.  The Korean Central News Agency and Rodong Sinmun, the state-owned media, describes the economy as being on the right track, and that the socialist system has been functioning well in all aspects of the nation.
Related Article: ＜Inside N. Korea＞ Market survey shows “Resolution 2270”, the toughest-ever sanctions, didn’t work

As a journalist trying to understand the “hidden North Korean economy,” I have conducted research through with following methods: 1) Collected as many testimonies as possible from North Korean defectors who fled into China either legally or illegally. 2) Obtained reliable evidence such as voice recordings, videos, and documents from Rimjin-gang reporting-partners living in North Korea.  This report depends on the research methods listed above. In order to give readers a solid understanding of the changing economy in North Korea, what the “hidden state” actually looks like, the report includes pictures taken inside North Korea.

1) The Planned economy collapsed as the black market economy emerged

1-1    Collapse of the planned economy

As one of the socialist countries, it is a well-known fact that North Korea adopted the one-party system by mirroring Stalinism; the country is ruled by the Workers' Party of Korea, and the economy is centrally planned.  As long as people worked at the places arranged by the government, food, clothing, and shelter were guaranteed. Education and medical service were free. Public services such as transportation and amusement parks were fixed at low prices, and were all provided by the government.  Although the quality of those services was low, the government could sustain the distribution system largely with foreign aid.  Fellow socialist countries provided North Korea with massive amounts of support during the Cold War since it was located in a strategic region, directly facing the “American Imperialist” in South Korea­.

However, as early as the mid-1970s, the North Korean economy started deteriorating.  The government repeatedly invested, or rather wasted, a tremendous amount of money on nonproductive projects rather than on improving infrastructure and the living conditions of its people. It heavily militarized the country and built monuments and buildings such as statues and portraits of Kim Il-sung across the country for propaganda of its leader. North Korea also hosted a large-scale event called the “World Festival of Youth and Students” in Pyongyang in 1989 right after the Summer Olympics of Seoul in 1988.

Besides the financial system operated by the state administrative agency, Kim Jong-il and Kim Il-sung operated an independent financial system called the “royal court” economy.  It grew big enough to suffocate the national economy and it ended up destroying the planned economy.

The end of the Cold War brought about the dismantlement and then the disappearance of the Eastern Block of Soviet states that had protected and supported North Korea. With capitalism the now dominant economic model North Korea refused to accept it and open up its economy to foreign countries; it failed to go through the economic self-reform to adapt to the changing international circumstances and the tide of new international politics.  During the course of the economic collapse, Kim Il-sung unexpectedly died in July 1994. A disaster for the entire population that eventually left many numbers of people dead was about to happen in North Korea.

1 2
Facebook Twitter はてブ Pocket Feedly
RECOMMENDATIONS
● Media Reviews
2014/Nov(UK) The Rory Peck Awards The Finalist Feature Winner 2014 201...
＜Inside N. Korea＞ The Deteriorating Plight of the People (3) Economy Reaches State of Panic [ISHIMARU Jiro]
In June, the economic turmoil began to take on the appearance of panic...
N. Korea Notifies Chinese Border Authorities that it Will Shoot "Hostile" Citizens and Smugglers "Without Warning"
◆ Chinese authorities bring North Korea’s warning to the attention of ...
Power Supply Recovery and Improved Potato Crop - A brief sigh of relief for N.Koreans
2015/April/06 Report: PAEK Hyan, North Korean reporter, Rimjin-gang Ed...
＜Emergency Interview on North Korea＞ A woman living in Hyesan City under lockdown, speaks in a painful voice: “If this continues, I will starve to death.”
Hyesan City in northern Ryanggang Province of about 200,000 people has...
＜Inside N.Korea＞ Death Is Common: Horrific North Korean Prisons Beyond Description
2017/Dec/21 The voice on the other end of the phone, in North Korea, ...
＜N.Korea photo report＞A Look at North Korea's Impoverished Rural Women (3) "I hate farmers" ... blatant marriage discrimination
◆Women don’t marry men from farms I often ask this question when I hav...
＜Inside N. Korea＞ K-Drama Crackdown: Prisons Packed as Regime Reacts to South Korea’s Rising Popularity
◆Public Denouncement Rallies Held Across the Country At the end of las...
“Wipe out the Korean Wave”: Prison Sentences and Family Banishments follow Kim Jong-un’s Direct Orders to Eliminate S. Korean Cultural Influence (2)
Although it is not a recent phenomenon, the crackdown on the "Korean W...
＜Inside N.Korea＞ Trading Firms Halt Wage Payments Due To Sanctions
2018/Feb/22 The economic sanctions on North Korea seem to be working....