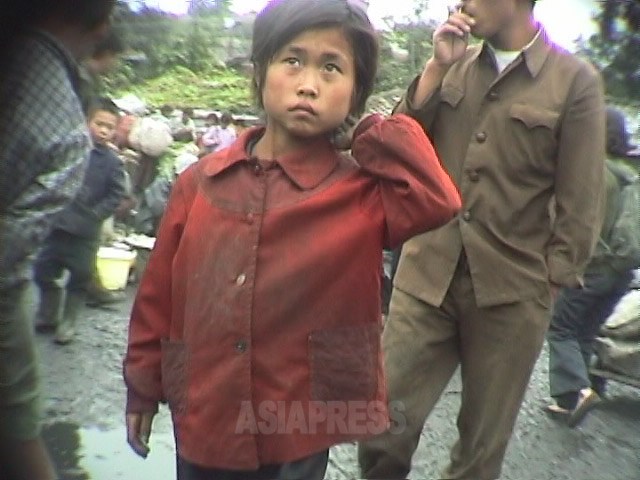 Kim Il-sung, the much-deified and absolute authority figure, suddenly died in July 1994 at a time when he had played an essential role in the North Korean social system.  An accumulated political and economic failure that had been repressed by the leader finally hit the country.  The “Kim Il-sung shock” caused the society to enter into chaos.  The state administrative agency became dysfunctional and North Korea’s social order was strongly shaken.  The food rationing system, the only way to have legal access to a food supply, almost completely collapsed.  The Arduous March was the worst famine to ever occur in North Korea.
Related Article: N.Korea Market Survey Reveals Basic Food Price Hike

While dealing with the fatal crisis to the regime, the government led by Kim Jong-il decreed the slogan: “Adhere to the spirit of the arduous march and keep fighting”.  This period of massive disruption has been called the “Arduous March” by North Koreans.  It was named after a fable about Kim Il-sung, as a commander of a group of anti-Japanese guerrilla fighters his group roamed around the mountains for a hundred days, being chased by the Japanese army since the end of 1938. [Note: In this report, the Arduous March is designated to have occurred from 1995 when a number of people started dyeing of starvation to around 2000 when the famine was somewhat over, but starvation was not completely eradicated.]

There are various speculations about the number of deaths in the period of arduous march, some estimate that around 200,000 to 300,000 people died while others claim that more than three million perished.  Since the government has not published any statistics, an accurate number of deaths is still unknown. [*Note 1]

Although the North Korean government admitted to the existence of deaths caused by the famine, it claimed that a deteriorated agricultural yield caused by torrential rains, floods, and droughts were to blame. In 1995 it applied to the international community for humanitarian aid. The reality was that social disorder caused massive paralysis of the functions of the planned economy such as agricultural production and commerce, leaving a vast number of people unable to access food and basic goods.

After enough people had died, and those still alive realized they must take their fate into their own hands, urban citizens started to engage in illegal businesses. In the start North Koreans exchanged their household belongings, such as furniture, for food to sell in impromptu city markets. Other jobs resilient North Koreans did were scrapping machines at a factory they worked at in order to sell the scrap metal; they also turned to selling processed food such as bread and rice cakes. The majority of people who had lost the access to food embarked on illegal businesses, expanding the black markets exponentially. [To be continued in part 2]

[*Note 1]: Hwang Jang-yop is the former secretary of the Workers' Party of Korea who defected to South Korea in February 1997.  In his book, “The Truth and Deceit of North Korea” ( Kobunsha, 1998) he wrote “[I]n 1995, 500,000 people including 50,000 high ranking officials starved to death.  It is assumed that 1 million people starved to death in 1996” and “without foreign aid, 2 million people would die of starvation in 1997”.  It is based on the story he heard from government officials in charge of agricultural statistics and food management.  Moon Hoi-il, a researcher and an ethnic Korean in Japan, assumed in his book, “The Demographic Change in the DPRK–the Socialism in North Korea Analyzed By Demography” (Akashi Syoten, 2011), that based on a demographic statistics, 336,000 people had died of starvation since 1995 to 2000.  Han Jong-sik is a highly intelligent defector who used to be a professor at a university and was also a technician at a large state-owned factory in North Korea.  He told me in an interview in 2004 that “a high-ranking official told me that the Party was aware that at least 10% of the whole population had died since 1995 to 1998.  I also thought that more than 10% of the urban population had lost lives in that period.”

1 2
Facebook Twitter はてブ Pocket Feedly
RECOMMENDATIONS
Student Smugglers: High-Schoolers Sneak into China to Smuggle and Steal for their Families’ Futures
With the Chinese border remaining sealed to block the spread of corona...
＜Inside N. Korea＞ Expansion of the market economy as the driving force behind social transformation--based on sources from inside N.Korea. (PART3) State-owned transportation is in a miserable state. by ISHIMARU Jiro
2016/Dec/21 ◆ Transportation and traffic have greatly increased and d...
＜Latest Photo Report＞ A Trip to the North Korea-China Border (Part 1: The View Along the Yalu River)
ISHIMARU Jiro visited the North Korea-China border in early autumn las...
＜Interview from Inside N. Korea＞ People are afraid of starvation if cities are locked down…PCR tests don’t exist…ASIAPRESS interviews a N. Korean to better understand the situation in the country and how people are feeling
North Korean state-run media has been reporting that the number of pe...
N.Korean Railway Workers Earn Through Bribes and Side-jobs As Monthly Wages Drop Below 20cents
North Korean Railway Workers Earn Through Bribes and Side-jobs As Mont...
Program for the Legitimization of Kim Jong-un Regime
2013/October/23 Written by ISHIMARU Jiro, Editor in Chief, Rimjin-gang...