Report by PAEK Hyan, North Korean reporting partner, Rimjin-gang
<This article first appeared in the Korean and Japanese edition of Rimjin-gang on September 2015>

Market price research is a useful means for North Korea watchers to index the living conditions of the ordinary people inside the country. This has become even more important since the state ration system was rendered ineffective.

State authorities long ago lost their ability to effectively control the production and circulation of basic food stuffs, and the actual price of goods is decided according to supply demand economics of the market place. 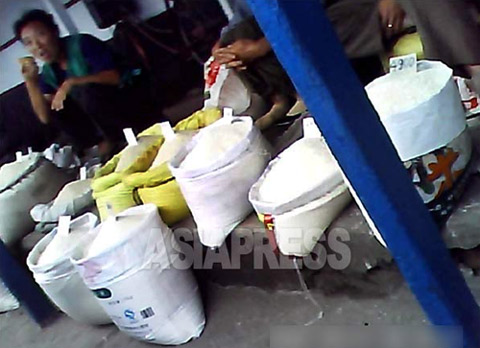 A booth selling rice at the market. Various sorts of grains are also sold here. The bag of rice on the far right of the picture is being sold at 1 kg for 4,900 won. (Chongjin, North Hamkyung Province. September, 2013) ASIAPRESS

The following table shows the price of basic foods at the market in Musan County as of that same time in August. For a comparative reference, we also show market prices in Hyesan, Ryanggang Province, obtained in May, 2015. Both places are on the Korean side of the Sino-Korean border.

Next Page
1 2
Facebook Twitter はてブ Pocket Feedly
RECOMMENDATIONS
＜N. Korea Pro Report (Part 5)＞ How is N. Korea’s Economy Faring in the Face of the Coronavirus Pandemic and Continued Sanctions? A Look at the Regime’s COVID-19 Countermeasures
North Korea’s authorities continue to claim that, as of May 25, there ...
＜Kim Jong-un's visit to China＞ Behind the scenes of smuggling in North Korea
North Korea and China share two rivers as their border: The Amrok-gang...
＜Inside N. Korea＞ A Building Burden: Rising Discontent as Regime Extorts Resources from Residents to Support Tourist Site
◆ “Construct a Special Tourist Zone in the Sacred Birthplace of the Re...
Living in Pyongyang - The Real Story (1) Capital City that Is Always "Prepared and Ready"
2013/August/07 Speaker： GU Gwang-ho, Rimjin-gang reporter Editors：ISHI...
＜Inside N.Korea＞ Is Economic Sanction Really Effective? Searching Effect from Retail Price Index
The UN Security Council adopted ‘Resolution 2270 (which sanctions Nort...
＜Inside N. Korea＞ Government sets nighttime curfew at 6 PM..."Police arrest anyone who leaves their homes..." Why now?
Starting in November, the Kim Jong-un regime shifted the nighttime cur...